The Bloomberg campaign is working with Meme 2020, a new company formed by some of the people behind extremely influential accounts.

Mick Purzycki is the lead strategist of the Meme 2020 project. He is also the chief executive of Jerry Media, a media and marketing company that is a powerful force in the influencer economy. The company's portfolio includes some of the most notable meme accounts on Instagram.

What the New York Times neglects to mention, for some reason, is that Jerry Media was behind the ridiculous (and fraudulent) marketing campaign for Fyre Festival. The promotional materials for the failed festival, which was driven by celebrity endorsements on social media, convinced thousands of rich idiots to fly to the Bahamas in hopes of seeing Blink-182. What they found instead was utter chaos.

Fyre Festival founder Billy McFarland was eventually thrown in prison for fraud. The rich idiots got lawyers and sued. After playing a key role in promoting the epic debacle, Jerry Media produced a documentary about the failed fest that was nominated for four Emmys. Jerry Media is no stranger to lawsuits, having been embroiled in a number of legal challenges over its blatant theft of content on social media.

So what, exactly, is Bloomberg getting for his money? Instagram celebs with millions of followers are posting sponsored Bloomberg memes. For example, this one from @grapejuiceboys (2.7 million followers):

Bloomberg, whose name has yet to appear on a primary ballot, has already spent more than $350 million on campaign advertising. He is hoping for a strong showing on March 3, aka Super Tuesday, when 14 states (including California and Texas) will hold caucuses and primaries. Betting markets currently rate Bloomberg as the second most likely candidate to win the Democratic nomination, behind Bernie Sanders.

Bloomberg is seeking to become the shortest U.S. president elected since William McKinley (five-foot-seven) in 1896. 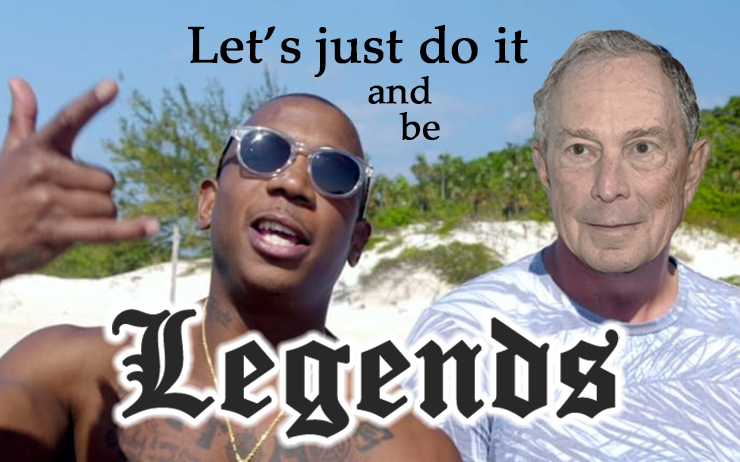