President Joe Biden embraced the woke terminology favored by radical left-wing activists in his 2022 budget proposal, which refers to mothers as "birthing people." 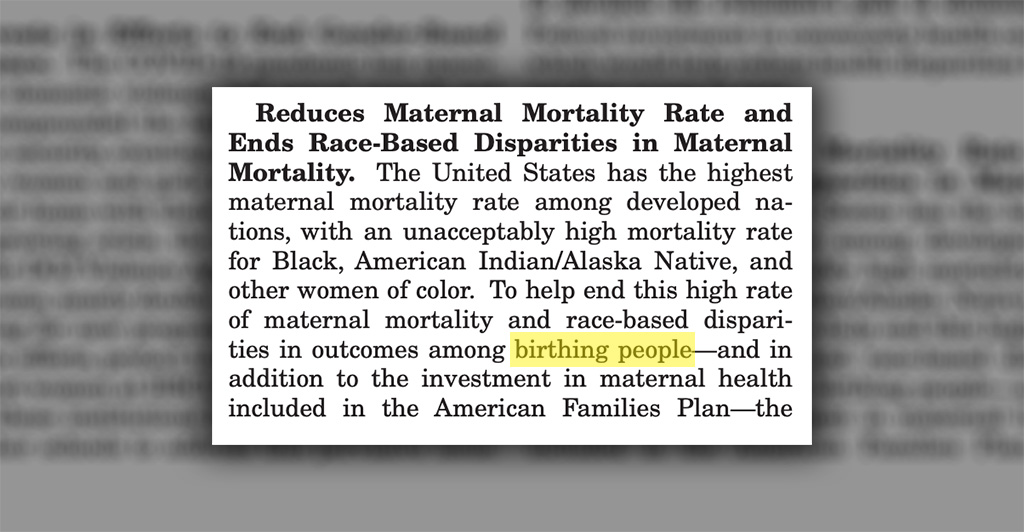 The term "birthing people" was thrust upon the public consciousness last month when Rep. Cori Bush (D., Mo.) used it during a speech on the House floor. Bush has since come under fire for her past work as a faith healer for a religious group that claims to have cured thousands of people suffering from AIDS, cancer, and other ailments.

Left-wing activists defended Bush's use of the term, which was met with widespread criticism on social media. "When we talk about birthing people, we're being inclusive. It's that simple," NARAL Pro-Choice America tweeted from its official account. "We use gender neutral language when talking about pregnancy, because it's not just cis-gender women that can get pregnant and give birth. Reproductive freedom is for *every* body."

The same activists attacked Bush's critics for suggesting "birthing people" was a ridiculous way to describe mothers. Snopes.com, the left-wing fact-checking website, published a strong rebuttal to a handful of joking statements about Democrats wanting to change "Mother's Day" to "Birthing People's Day."

Biden's budget is the first known instance of the term making its way into a policy document at the federal level. The budget's language, however, is not entirely consistent. Another section touts paid-leave policies for their success in keeping "mothers in the workplace."

Woke activists will be similarly disappointed by the budget's use of "Latino," as opposed to the more inclusive "Latinx," a term that most people of Latino or Hispanic origin have never heard and do not use.