Facing a massive coronavirus-induced deficit, Democrats in the California legislature are weighing a suite of new taxes on top earners, including a first-of-its-kind wealth tax and the highest top rates in the nation.

California is the most heavily taxed state in the union, but that did not stop legislators from floating an additional $60 billion in taxes by early June—before the wealth tax or income tax hike were proposed. Those latest plans would directly target the wealth of California millionaires, who already pay the lion's share of state taxes.

Assembly Democrats argue that more taxes are needed to stave off the threat of fiscal insolvency brought about by the state’s response to the coronavirus crisis. But California taxpayers and one tax expert tell the Washington Free Beacon that the threatened hikes could drive the state's wealthiest to flee. That would slow the recovery, as they take their wealth and connections with them, and further contribute to the outflow of many of California's most successful businesses.

Such an exodus would only add to the troubles of the state sometimes touted as a shining beacon of Democratic rule, whose governor, Gavin Newsom (D.), was slated to speak in a much-coveted slot during the Democratic National Convention's final night on Thursday. Newsom's last-minute cancellation, however, further emphasizes the tenuous status of his state—one resident described it to the Free Beacon as "a feudal society"—and the social upset that the new taxes could bring.

The two latest tax proposals, Assembly Bills 1253 and 2088, both explicitly target California's ultra-wealthy. A.B. 1253, released in late July, imposes an additional 1, 3, and 3.5 percent tax on earnings over $1, $2, and $5 million, respectively, applied retroactively to the first day of 2020. A.B. 2088 would impose a 0.4 percent tax on all personal wealth in excess of $15 million ($30 million for couples), including assets outside of California.

Both bills would hit many of the state's tech billionaires, such as Oracle CEO Larry Ellison (worth $59 billion), Mark Zuckerberg ($54.7 billion), and Democratic megadonor Laurene Powell Jobs ($16.4 billion). A.B. 2088 would be the first state wealth tax in the nation, mirroring the tax agendas of prominent progressives such as Sens. Bernie Sanders (I., Vt.) and Elizabeth Warren (D., Mass.).

Assemblyman Rob Bonta (D.), one of A.B. 2088's main sponsors, argued that the bill was necessary to fill the $50 billion budget hole left by the coronavirus crisis.

"Families are hurting right now," Bonta said at the bill's unveiling. "COVID-19 has only made matters worse. In times of crisis, all Californians must step up and contribute their fair share. Asking these well-resourced Californians to give a little more to keep our people working and support our most vulnerable is the right thing to do."

But state tax watchdogs disagree. Robert Gutierrez, president of the California Taxpayers Association, told the Free Beacon in a release that both taxes were excessive, especially given the $9.2 billion in new business taxes in the state's recently signed budget.

"Enough is enough," Gutierrez said. "A very small number of Californians pay the vast majority of state income taxes. When the constant drumbeat for outrageous tax hikes drives them away, who will pick up the tab?" 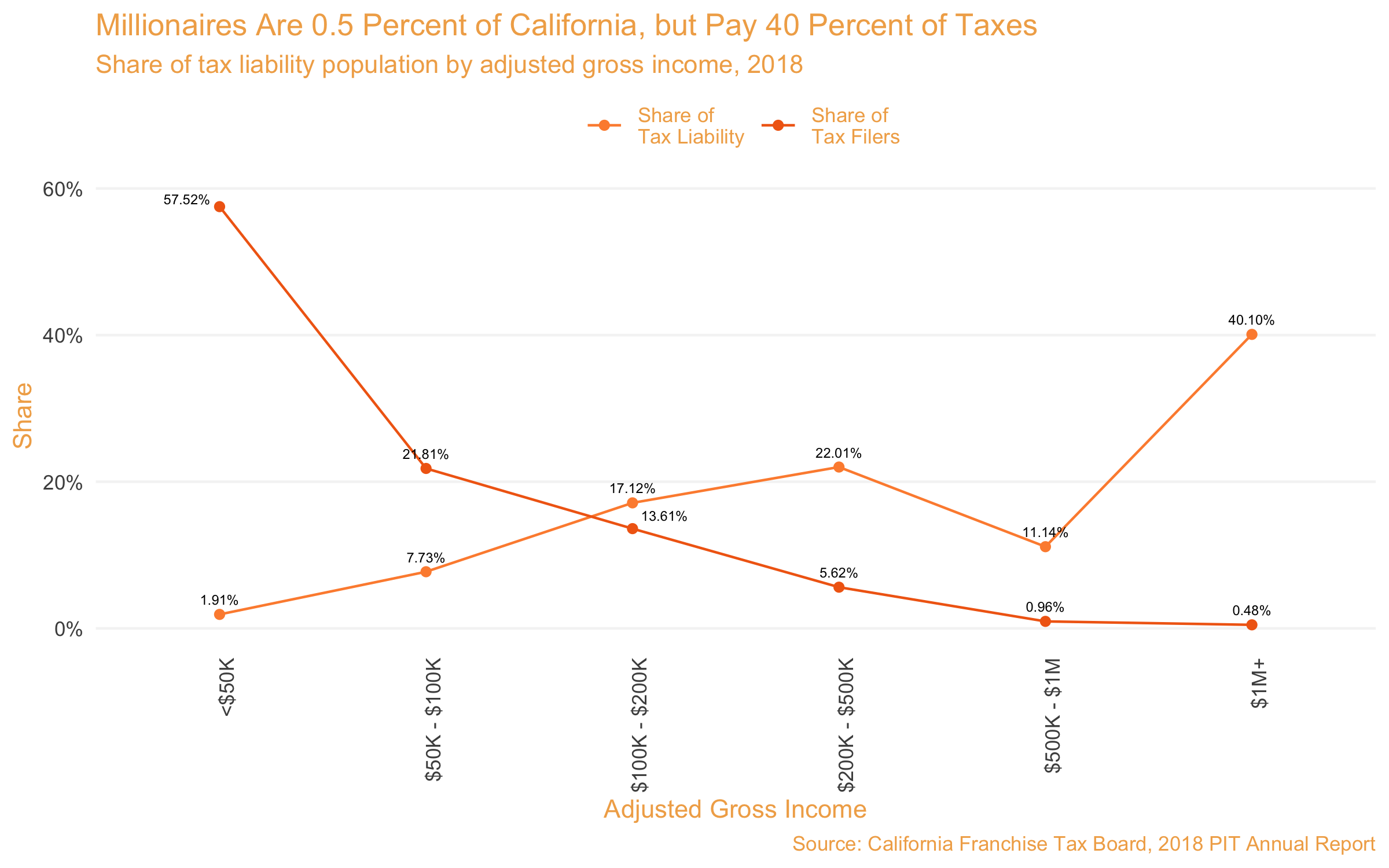 Data from the state tax board back up Gutierrez's claim. Fewer than 200,000 Californians, less than half a percent of the state's population, make over $1 million per year. But that same group is responsible for 40.1 percent of the state's annual tax revenue, with Californians making $200,000 or more kicking in another 33.2 percent. Katherine Loughead, a senior policy analyst at the right-leaning Tax Foundation, told the Free Beacon that is an unstable arrangement.

"All it takes is a few high earners leaving California to dramatically impact the budget, because the state already relies so heavily on income from high earners, and that is so volatile," she said. 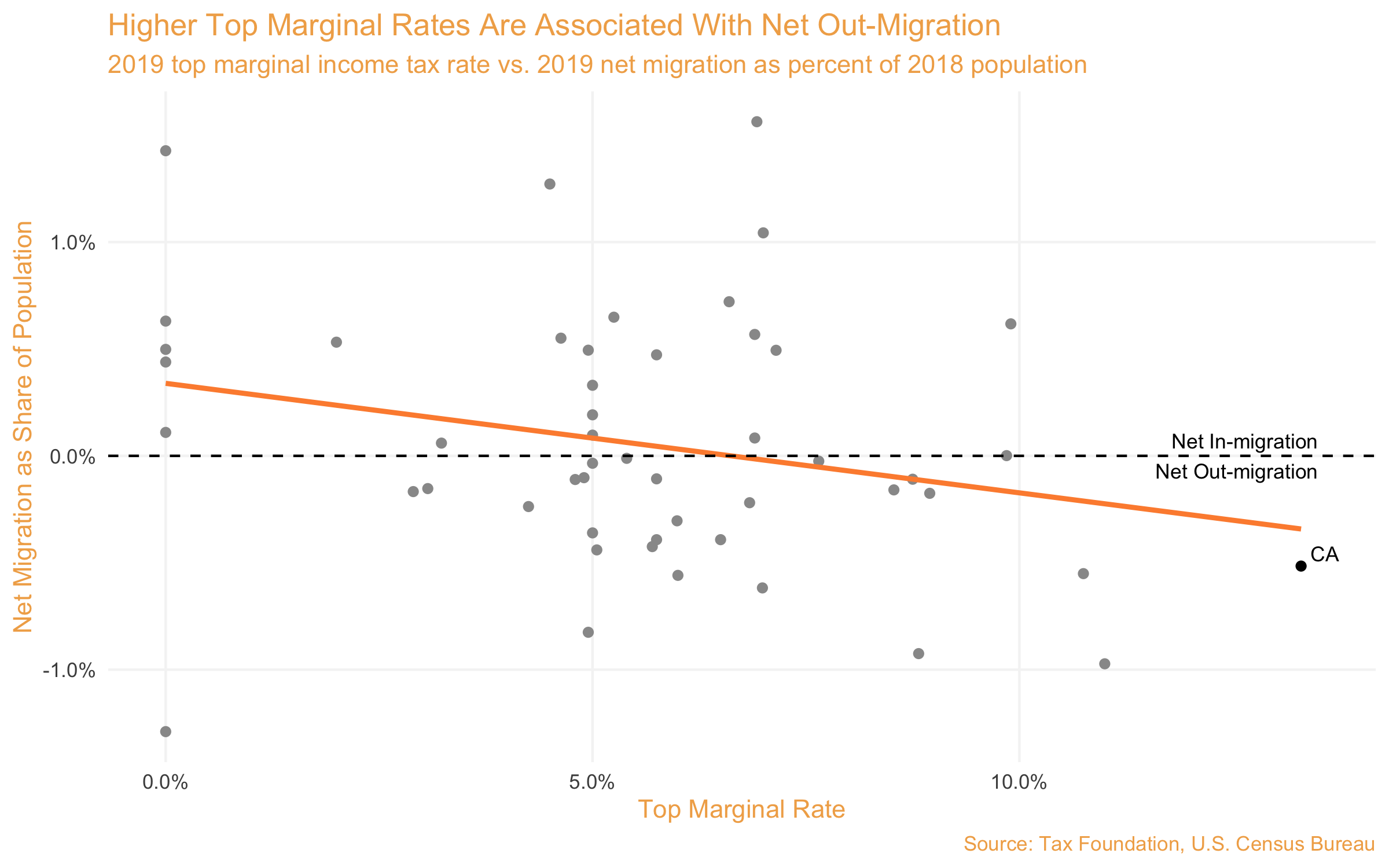 Loughead noted that, in general, states with higher tax rates have higher rates of out-migration. Research bears this claim out: A 2019 study found that a 2012 increase of California's top marginal tax rate increased out-migration by the wealthiest, reducing the revenue gains from the increase by 60.9 percent. A 2011 study from the New Jersey Department of the Treasury similarly found that a new top rate made the wealthy flee, costing the state $2.5 billion in tax revenue, while a 2017 study used nationwide data to find that state tax policy significantly affects where top scientists live.

Such an out-migration would only exacerbate the ongoing mass flight of businesses from the Golden State. On Thursday, ridesharing giant Lyft became the latest, announcing that it would suspend its service in California, citing the regulatory environment—competitor Uber is expected to follow. In the past several years, major companies such as Charles Schwab, Carl's Jr., Toyota, and Tesla have departed; many left for lower-tax Texas, which has actively courted California businesses.

The trend is not restricted to the wealthy or businesses. Data from home-buying website Zillow reveal that home offerings in San Francisco increased 100 percent over the previous July, rocketing past similar cities as remote-working denizens try to dump their homes and flee five separate tax hikes on November's ballot.

One Bay Area resident, who cited privacy concerns in requesting not to be named, told the Free Beacon that he is considering decamping to Texas or Idaho now that his six-figure job is remote. He said the tax savings alone—an estimated $30,000 a year—would make it worthwhile, as would the improved quality of life.

"It's become a feudal society. Uber rich and then horrible poverty," he said. "I've had my life threatened by homeless people, when I worked in S.F. saw people shoot up heroin or poop in the streets daily, and have had two friends robbed at gunpoint in the last 12 months."

These comments highlight one of the risks of driving out the wealthy residents of the nation's sixth most unequal economy. California is home to 12 percent of Americans, but over a quarter of the nation's homeless. It also has the highest share of noncitizen residents, according to the Census Bureau, a group disproportionately likely to be less educated and more reliant on welfare benefits. The state is the nation's sixth most generous, in terms of public welfare dollars per capita—an arrangement funded largely by its wealthiest taxpayers.

But as state Democrats bear down on them, regular Californians and the uber-wealthy alike may reconsider if this bargain is really worth it.

"It's very tempting to look at [other] states and think how cost of living could be a lot better, and income could go a lot further, and you could grow your business a lot faster in different environments that may not even have an income tax at all," Loughead said. "So I think those types of states are going to look more and more appealing to Californians."