A United States Marine who has been "walking the walk for fellow veterans" is set to complete a roughly 300 mile march from his home in North Carolina to Washington, D.C., on Saturday when he will complete the final leg of his journey from just outside the city.

It all started for Vietnam veteran Terry Sharpe in September 2014 when he grew fed up that fellow Marine Andrew Tahmooressi was being held in a Mexican prison and that President Barack Obama wasn't doing enough about it. After completing that march, Sharpe and fellow Marine Allen Brown decided to pick up and do the walk it again.

Now Sharpe is just four miles from completing the same walk again, this time with the mission of urging members of Congress to take action to get former Marine Amir Hekmati and other Americans such as pastor Saeed Abedini currently imprisoned in Iran released.

"Why are we negotiating with Iran without getting our boys released," said Sharp, in reference to ongoing nuclear talks with Iran. "[Secretary of State] John Kerry should say, ‘Let these boys go and then we could sit down and talk.'"

Sharpe began his current walk, which also aims to raise awareness for the high veteran suicide rate, on June 1 and set up a website, WalkingMarine.com, for his supporters to track his daily progress. 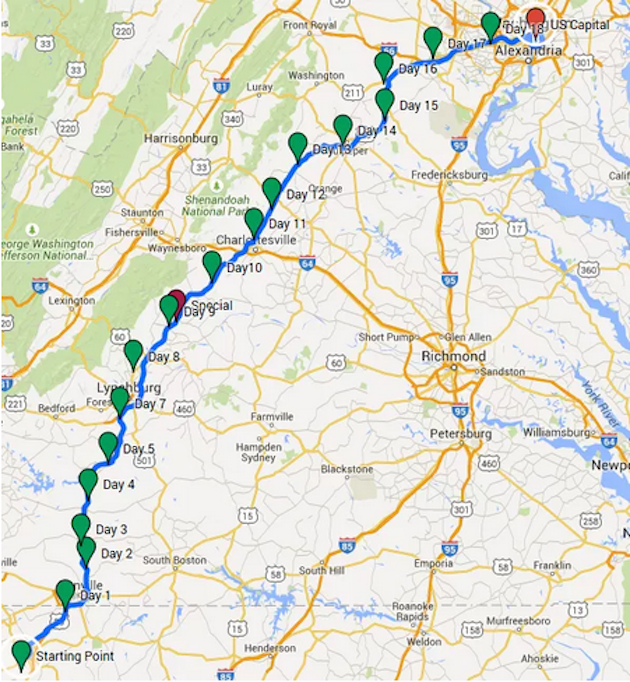 The website is also used by Sharpe to thank all those who have helped him along the way. He thanks all that assist him with food, lodging, or who have joined him for portions of the walk. He even thanked one woman who gave him free coffee at a Kangaroo gas station.

The last bit of help Sharpe is asking for is that people join him at 8:30 A.M. on Saturday at the Arlington Gateway Park in Rosslyn, Va., to complete the walk.

Sharpe, who remained involved in the fight to have Tahmooressi released by Mexico after his walk by attending congressional hearings and working with the Tahmooressi family, plans to do the same after this walk.

He will remain in Washington, D.C., next week and plans to meet with multiple members of Congress to discuss the situation in Iran.