Marines Arrive at White House and Demand Action from Obama

The two Marines who have traveled 300 miles by foot to deliver a message to the White House regarding the case of Sgt. Andrew Tahmooressi reached their destination on Thursday morning and were joined by a large crowd of supporters.

Marine veterans Terry Sharpe and Allen Brown rallied supporters in the rain early Thursday morning in Arlington Gateway Park just outside of Washington, D.C, as they prepared for their 21st and final day of walking to the White House.

The two 63-year-olds served in the same battalion during the Vietnam War and say they fought in many of the same battles. However, they didn’t meet until Brown saw Sharpe walking down the road nearly three weeks ago and decided to join him for the rest of his journey.

Supporters who had helped Sharpe and Brown along their long journey as well as new supporters met the veterans Thursday morning to walk to the White House.

"I have been following their story since they started and was glad that I could meet up with them today and see them finish it out strong," said Brendan Strum, a former Marine who traveled from his home in Nags Head, N.C., to join the walk for its final 2.4 miles.

The day’s walk began on the Key Bridge, where Sharpe and Brown were met by police officers and informed that the group would be given an escort of three police motorcycles and a police car for its walk through the city.

The group grew as it went. Many supporters of what the Marines called the "Free Sgt. Tahmooressi March" were waiting along the route from the park to the White House and even more were waiting at the final destination. 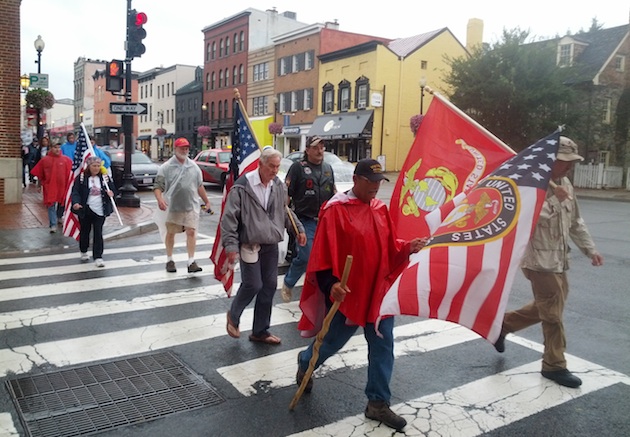 Sharpe stood in front of the White House and read aloud his letter to President Barack Obama to the crowd that gathered around him.

"As Marines we pledged long ago to never leave another Marine on the battlefield, and you have expressed this same sentiment as commander in chief," said Sharpe. "Our nation owes Sergeant Tahmooressi a debt of gratitude, and you have the ability to repay part of that debt by making one phone call."

"As the most influential leader in the free world, one call from you to President Enrique Peña Nieto could surely spare Sergeant Tahmooressi and his family any more grief, and bring him home so he can receive the help he needs to allow him to lead a full and productive life," he said.

The two Marines then held their cell phones above their heads to symbolize their demand that Obama immediately "make the call" to Mexico.

He then added that although their walk to the White House is finished, his fight to have Sgt. Tahmooressi released is far from over.

"This is the end of my and Allen’s journey here, but not the end of my quest to free Sgt. Tahmooressi," said Sharpe in front of the White House.

When asked how he plans to get home, Sharpe said "I have no idea, but I ain’t walking home."

"We are in good spirits and have had good people behind us," said a clearly emotional Brown. "We miss our families."

After Sharpe and Brown finished speaking, a fellow Marine led a prayer for Sgt. Tahmooressi in front of the White House lawn.

After leaving the White House, Sharpe and Brown walked to the Mexican Embassy located just blocks away. They were greeted by a press official who said that the embassy was "aware of the situation" and "will pass along the message" to Ambassador Eduardo Tomás Medina-Mora Icaza and the "proper authorities in Mexico."

The Marines are not going home just yet. They will stay in Washington, D.C., for a week, and plan to attend a hearing being held by the House Committee on Foreign Affairs regarding the case of Sgt. Tahmooressi on Oct. 1.

They will also meet with Sgt. Tahmooressi’s mother, Jill Tahmooressi, who will testify at the hearing. Sharpe and Brown will give the flags that they have carried with them on their 300-mile walk to Tahmooressi.

Supporters of Sharpe and Brown say that they are not done fighting for Sgt. Tahmooressi either.

"I think the president can make that happen with one telephone call and I will do whatever I can do to help encourage him to make that call," said Strum.

The White House did not respond to a request for comment