Venezuela President Nicolas Maduro on Wednesday became the second autocratic leader in recent months to opine about international affairs in the pages of the New York Times.

Maduro wrote in the Times that "now is a time for dialogue and diplomacy" in Venezuela and called for mediated talks to end two months of protests against his administration. His op-ed followed Russian President Vladimir Putin’s column last September urging President Barack Obama not to order strikes against the Syrian government, which U.S. officials believed had used chemical weapons to kill hundreds of its own people.

Nearly 40 people have died in the protests that began in early February after the sexual assault of a female college student on campus. Demonstrators say they are fed up with rampant crime, inflation, and shortages of more than one in four basic goods.

A Washington Free Beacon analysis found that Maduro’s op-ed was riddled with exaggerations and inaccuracies: 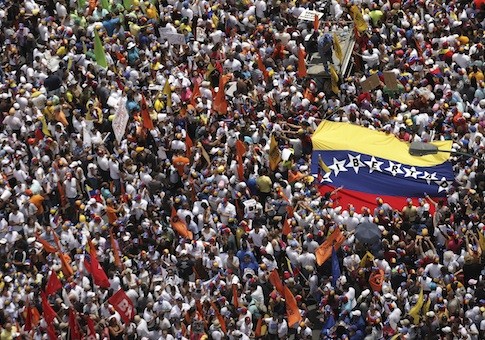 Maduro cited United Nations and World Bank data to argue that his government, as well his predecessor Hugo Chavez, had reduced income inequality and poverty in Venezuela.

While both of those measures have decreased since Chavez was first elected president in 1998, Maduro did not mention that Chavez himself acquired great personal wealth during his 14-year rule.

Chavez’s family now reportedly owns 17 country estates totaling more than 100,000 acres in the western state of Barinas, as well as assets of $550 million stored in various international bank accounts. Residents in the same region wait as long as three hours for basic provisions at grocery stores.

National Assembly Speaker Diosdado Cabello, a close confidant of Chavez and member of Maduro’s United Socialist Party, has allegedly amassed "a private fortune" through corruption and ties to regional drug traffickers. The Miami Herald reported accusations last week that Cabello received at least $50 million in bribes to overlook lucrative public contracts that were overpriced, according to a recent lawsuit.

Maduro said those who distort events in Venezuela are "on the side of the 1 percent."

"We have created flagship universal health care and education programs, free to our citizens nationwide" 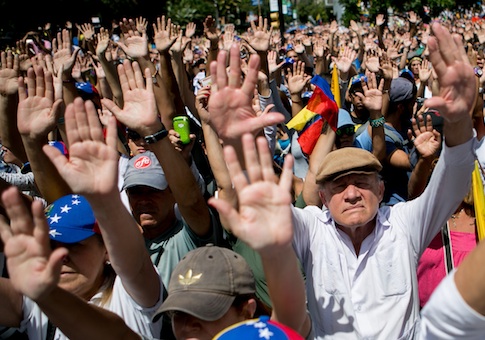 The Associated Press reported in November that Venezuela’s health care system "is collapsing after years of deterioration."

About 90 percent of the country’s public hospitals lack vital supplies due to government-imposed dollar shortages and price caps. The government was forced to suspend organ donations, transplants, and non-emergency surgeries.

Evelina Gonzalez, a San Mateo resident with breast cancer, told the AP that she has "nowhere else to turn" after being rejected for surgery at several hospitals and watching her cancer spread. 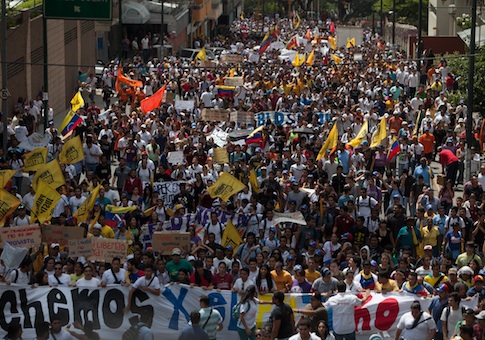 Maduro touted Carter’s praise of the Venezuelan electoral system in 2012.

However, the opposition claimed that its witnesses were ejected from multiple voting centers during last year’s presidential elections—which Maduro won by a razor-thin margin. Former Chavez allies or "chavistas" dominate the National Electoral Commission, according to the pro-democracy group Freedom House.

Although Maduro’s socialist party captured just one percent more of the 2010 legislative vote than the opposition, it secured about 30 more seats due to electoral law revisions. The government frequently uses state-run media to promote socialist candidates.

"The protesters are, we believe, directly responsible for about half of the fatalities…" 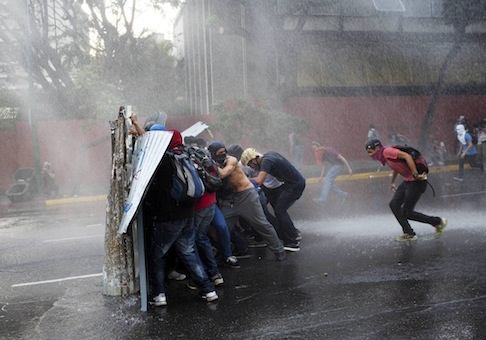 While some National Guard members have been killed during the protests, reports indicate that the protesters have bore the brunt of the violence.

Hundreds of protesters have been arrested, and the opposition says dozens have been tortured. State security forces, including pro-government militias known as "colectivos," have beaten residents and fired at them from rooftops.

"Within Venezuela, we have extended a hand to the opposition…" 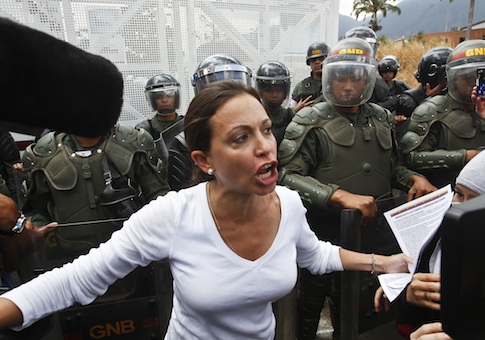 Observers say it remains unclear who would represent the opposition at Maduro’s proposed "peace" talks.

Two opposition mayors elected by large majorities have also been sentenced to several months in prison, according to the Human Rights Foundation. 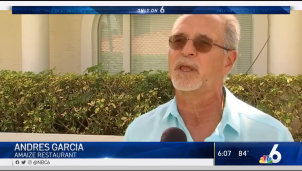