As Biden admin turns blind eye to sanctions, China and Iran cash in

A network of Chinese petrochemical refiners is behind an upswing in the importation of illicit Iranian crude oil, providing the hardline regime in Tehran with at least $22 billion in revenue since President Joe Biden took office.

Chinese refiners known as teapots, which are semi-independent and not state-controlled, are primarily responsible for "funding this illicit and uniquely lucrative trade" with Iran, according to information obtained by United Against a Nuclear Iran (UANI), an advocacy group that works to expose those who help Tehran to evade economic sanctions.

China's use of these teapots is part of a coordinated effort to evade international sanctions on Iran's oil trade, according to UANI. Through this network, Beijing has been able to purchase Iranian crude well below market price while obfuscating its origins. Teapots allow Beijing to bypass its state-controlled refineries and misrepresent the purchases as originating from countries not subject to sanctions.

This oil scheme has allowed China to import at least $22 billion in Iranian crude since the Biden administration took office and relaxed sanctions on Tehran as part of a bid to secure a revamped nuclear agreement. China was importing an average of 400,000 barrels of oil per day from Iran before Biden became president. That number has risen to around 1,000,000 per day since Biden took office, according to figures published by UANI. 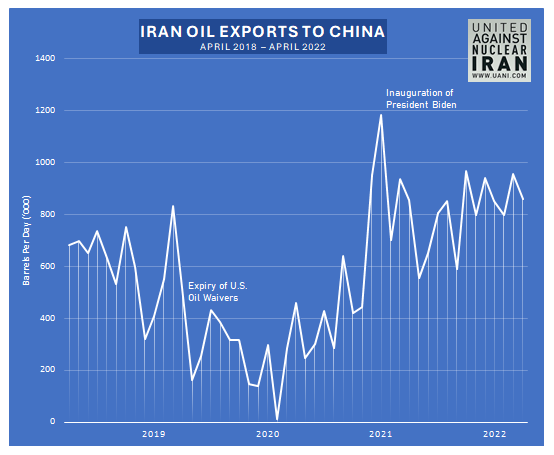 Documents obtained by UANI show that "the bulk of Iranian oil is indeed being imported by the teapots." Records seen by the group detail at least 40 different shipments of Iranian oil to China dating back to 2019. By using these smaller and semi-independent teapot refiners, China is able to protect its big-name oil firms from sanctions and say it is winding down Iranian imports to comply with international sanctions on Tehran's crude, according to UANI.

"The fact that teapots—rather than major state actors—would import the bulk of Iranian oil makes sense from China's perspective," the organization said in a policy brief outlining its discovery of the teapot oil scheme. "Since the U.S. has in fact sanctioned Chinese state-owned imports in the past, such as Zhuhai Zhenrong, the decision to import Iranian oil via dozens of small unaffiliated ‘non-state' firms helps obscure the Chinese government's role and protect its own big firms from scrutiny, accountability, and attendant sanctions."

"With their small size and limited business operations," by contrast, "teapots are both hard to uncover and not exposed to the U.S. financial system," the group said. "In conjunction with the clear lack of U.S. enforcement, the threat of sanctions is therefore far less of a constraining factor."

Teapots import around one-fifth of China's total oil needs. They purchase Iranian oil well below market price due to the illegality of these deals and then conceal the crude's origins by mislabeling the product as originating from Oman, Iraq, Russia, or other countries.

The top teapot refinery importing Iranian crude is Shandong Shengxing Chemical Co., Ltd., according to UANI's findings. The Chinese government in May 2018 awarded the company an import license, just two weeks after then-president Donald Trump pulled out of the Iran nuclear deal.

"Shengxing has received at least six different shipments of Iranian crude, branded as Oman crude, and one branded as Iraqi crude oil," according to UANI's data. "Together these shipments totaled approximately 7.3 million barrels of Iranian oil."

The second biggest teapot importer is Shandong Dongfang Hualong Industry & Trading Group, which was awarded its license on that same day as Shengxing. UANI discovered that this teapot also received important Iranian crude oil and then misbranded it as coming from Russia and other countries.

UANI chief of staff Claire Jungman said these teapots are a cog in the Iran-China financial relationship.

"As oil prices have gone up, sanctioned Iranian oil barrels are more attractive to teapots due to the steep discounts," Jungman said. "The incentive for teapots is always the low price. These shipments are always rebranded and don’t show up in official customs data. These teapots are key in keeping the money flowing from China to Iran."