The Chicago police department substantially reduced routine investigatory stops in the wake of protests following the death of George Floyd, official data obtained by the Washington Free Beacon show, with daily stops dropping by as much as 80 percent against historical averages.

Investigatory stops fell in March during the coronavirus shutdown, but rebounded to pre-2020 averages by the end of May—until, that is, the onset of protests. Then, as a wave of still-ongoing violence gripped the city, police drastically cut their street stop activities to levels which had not recovered by the end of June.

This backing off may have contributed to the homicides and shootings that have plagued Chicago for much of the summer. The reason for the decline in stops is unclear: Protests may have stretched limited police resources or, one Chicago-area think-tanker told the Free Beacon, a greater culture of hostility to the police may be encouraging officers to think twice before stopping.

Regardless of cause, the data from Chicago add to the evidence from Minneapolis and New York City that cops withdrew from routine street enforcement in the wake of the protests. Whether through diverting police attention or through fostering anti-cop sentiment, the nationwide protests may be worsening the spike in violence that has beset America's big cities over the past six months.

Chicago police began cutting back on stops in late March as the city shut down in response to the coronavirus. At the time, community organizers agitated for an even more comprehensive reduction, arguing against the CPD even enforcing the shut-down order issued by Gov. J.B. Pritzker (D.). 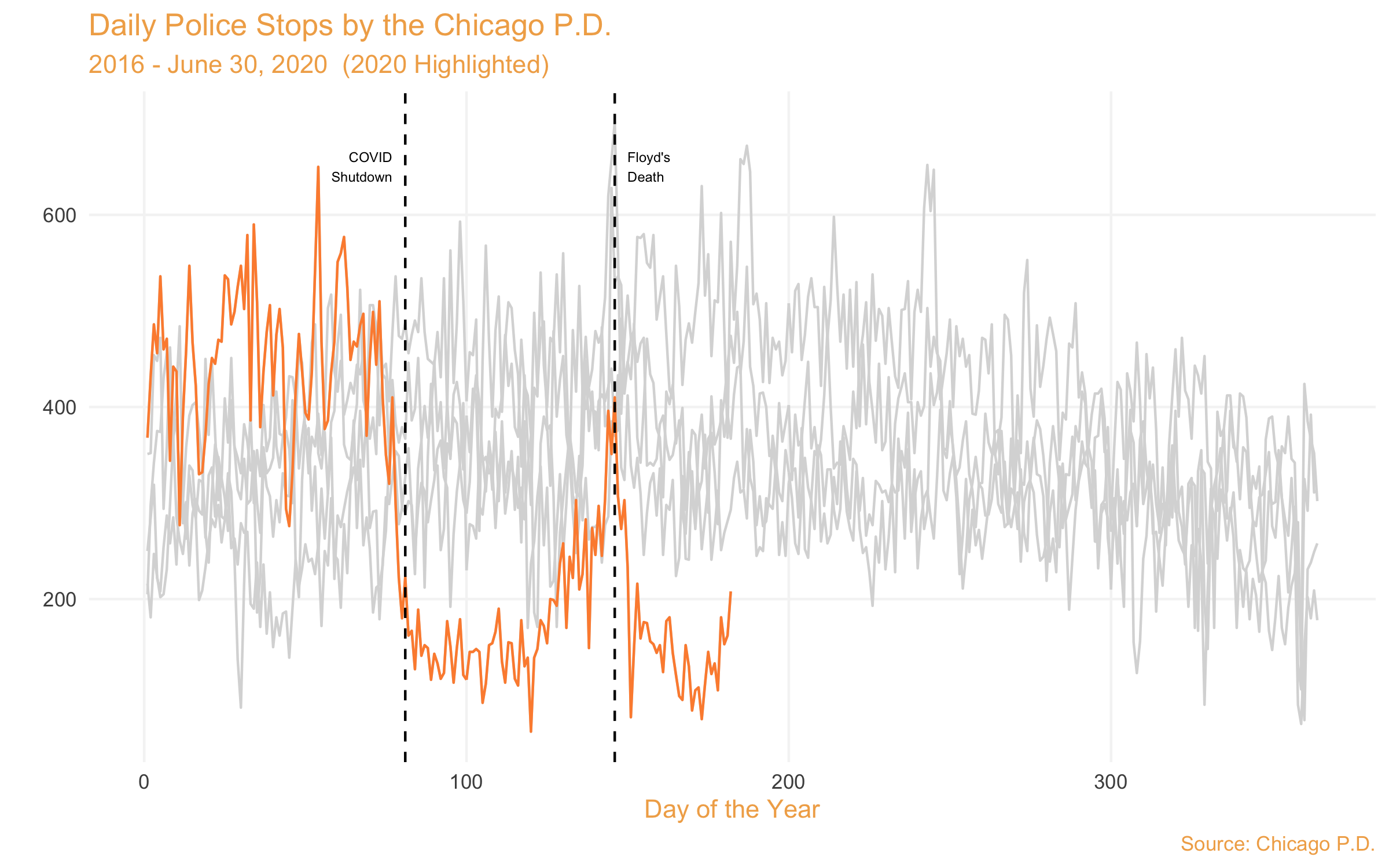 From the start of the year until March 17—four days before the statewide shutdown order—the Chicago P.D. stopped as many or more people as they had on the same day over the average of the preceding four years. But as the shutdown commenced, stops plummeted, falling to less than 50 percent of the historical average.

Starting in early May, however, stops began to rebound, nearly returning to pre-shutdown levels—at least until the protests started. In the days following the death of George Floyd and ensuing protests, stop counts fell to as little as 18 percent of the pre-2020 same-day average. They rebounded some through the end of June—the latest data available—but remained well below pre-protest levels. 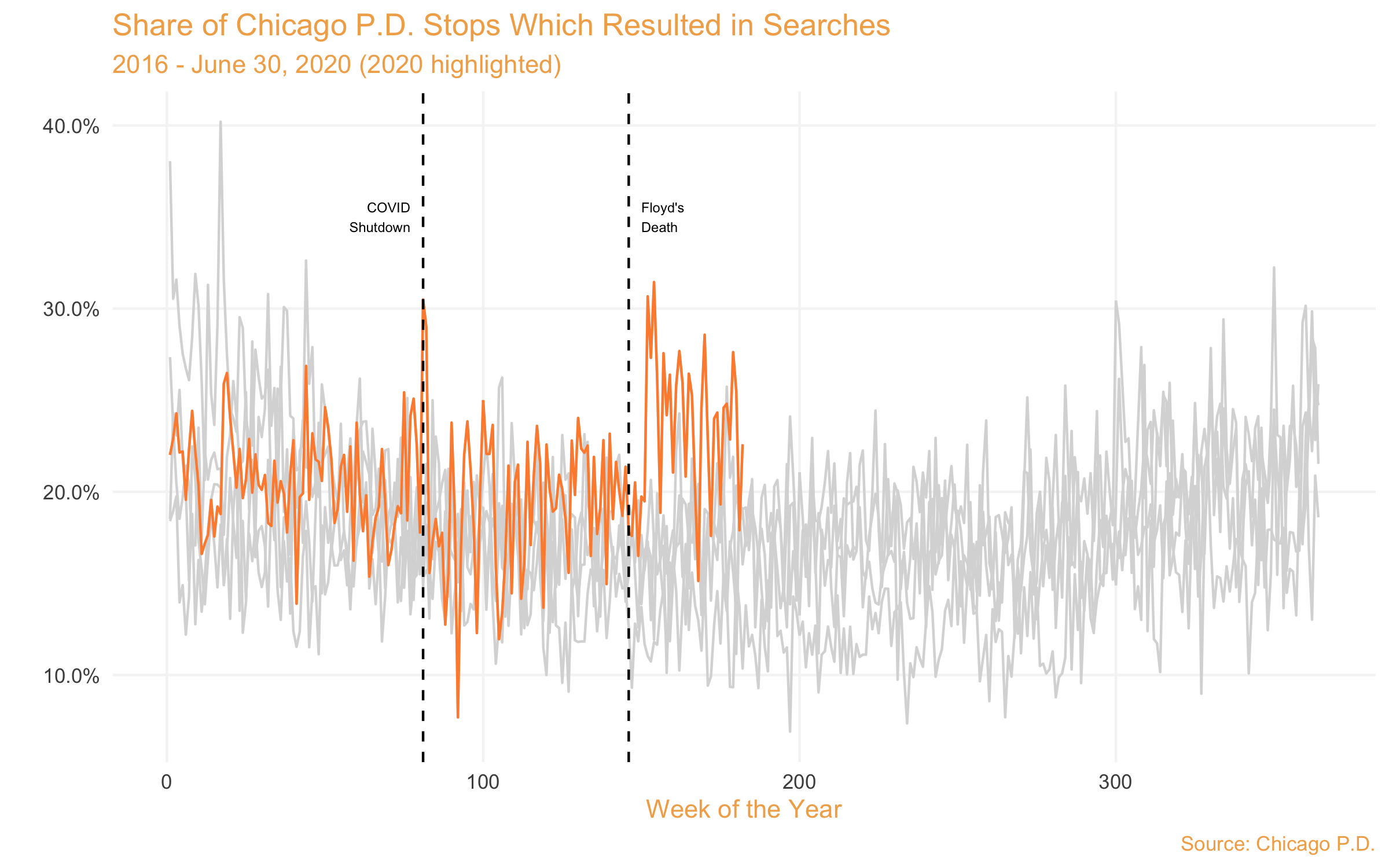 The data also reveal that while the Chicago P.D. is conducting fewer stops overall, the share of stops which involve searches—a practice critics deem invasive, and proponents see as essential to fighting crime—has actually risen. That suggests that while cops are doing less stopping, they are not deterred from conducting searches of those they do stop, as they were during Chicago's last homicide spike, in 2016.

The second, post-protest decline in stops is coincident with the surge in gun crime and homicides that has plagued Chicago for much of the summer. That spike has continued unabated into July, which was the single deadliest on record since 1992. The ongoing violence has prompted CPD plans to reinstate a hot-spot policing initiative, which it hopes will tamp down on the shooting.

What caused Chicago P.D. to step back? One plausible explanation is that protests and looting have drawn police attention away from responding to ordinary street crime—simultaneously making it harder for them to do beat enforcing that can help curb crime.

Reached for comment, CPD spokesman Michael Malinowski emphasized that stops "may fluctuate naturally over time from one area to another as criminals try to avoid apprehension." He further  said that "fewer people outside results in fewer investigatory stops"—crime data, however, indicate that there are more offenders on the streets than there were during the CPD's first lull.

"The overall numbers may be down but make no mistake, CPD officers are working hard to keep neighborhoods safe," Malinowski said. "In fact gun arrests have seen about a 15 percent increase over last year. CPD remains partnered with the community and committed to addressing crime and disorder in every neighborhood as we all continue to deal with the challenges of the COVID-19 pandemic."

Jim Lakely, vice president at the Chicago-area conservative think tank the Heartland Institute, told the Free Beacon that another factor might be at play: hostility to the police.

"When the entire culture and the political class in Chicago is embracing the idea of defunding the police, what do you think that does to police morale?" Lakely asked, adding that the decline in stops is likely "because either they've been ordered to do so, or they feel that it could be career suicide to do so, because you're putting yourself in a position for something bad to happen in which you will take all the blame and the potential criminals will not."

As evidence of declining morale, Lakely pointed to the suicide death in July of Deputy Chief Dion Boyd, the ninth and highest ranking Chicago P.D. officer to take his own life in two years. He also connected police reticence to a lack of support from Cook County D.A. Kim Foxx, a "progressive prosecutor" who, a recent Chicago Tribune analysis found, has dropped 30 percent of cases against felony offenders during her time in office.

Whatever the cause, the decline in stops in Chicago mirrors trends in other cities struggling with surging violence. A Free Beacon analysis found stops have plummeted in Minneapolis since the protests began, while another analysis of NYPD data shows that arrest rates were rising in line with surging shootings and murders until the onset of protests caused a sudden drop off in police activity.