N.Y. Cops Were on Top of a Crime Wave—Then the Protests Came

The city, like many across America, is struggling with a wave of shootings and homicides that has reached historic highs. But for many weeks, the NYPD kept pace, amping up arrests in response to the rising violence.

In June, however, ratios of arrests to criminal complaints fell sharply, coinciding with the start of the Floyd protests. City officials have blamed the decline on the continuing rise in gun violence since then, while the NYPD complains of an underfunded department stretched further by the need to respond to protests and looting—and some police officers grumble about their treatment.

All that suggests that protests against the police may be indirectly contributing to a summer of violence unlike any over the past decade. That linkage, which mirrors the trend in at least Minneapolis, suggests that the twin phenomena of nationwide demonstrations and an unexpected spike in homicide may not be as unrelated as some analysts have suggested.

New York, for years lauded as one of America's safest cities, is witnessing the same spike in violence that many other American metropolises have faced this year. Data from the NYPD show that crime fell to historic lows in the days after the city was locked down for the coronavirus pandemic and New Yorkers sheltered in place. 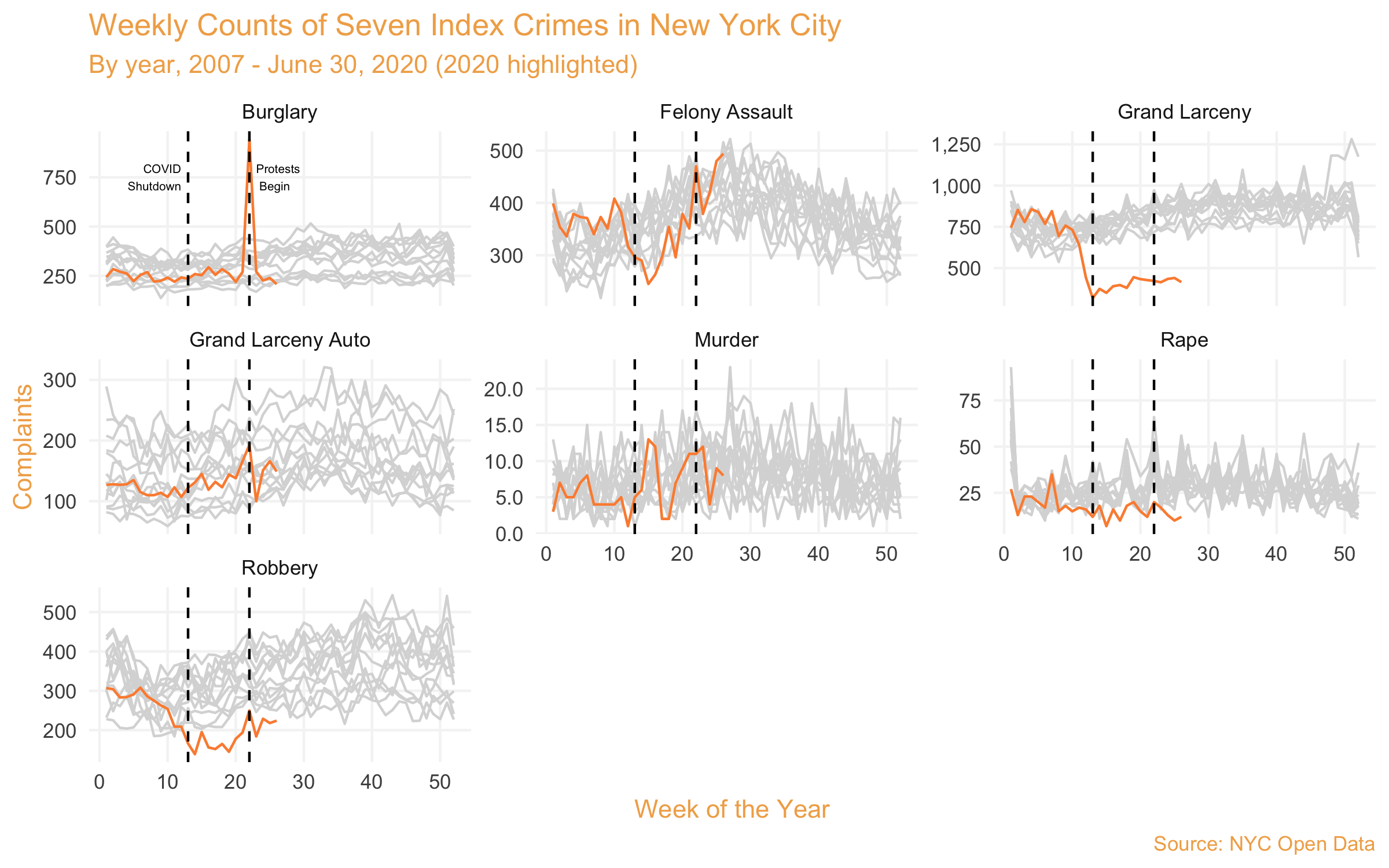 But while property crimes have remained low—with the exception of a spike in looting during the protests—murders and particularly gun assaults quickly rebounded, reaching historically high levels. July 2020 saw 20 more homicides and 156 more shooting incidents than July 2019, a 59 percent and 177 percent increase, respectively.

The increase in homicide was actually less pronounced than the rise in shooting incidents. By the first week of August, New York City had seen more shootings than over the entirety of 2019. Official data indicate that shootings were low in the first four months of the year, but began rising steadily in late April, continuing an upwards spike through the Floyd protests. 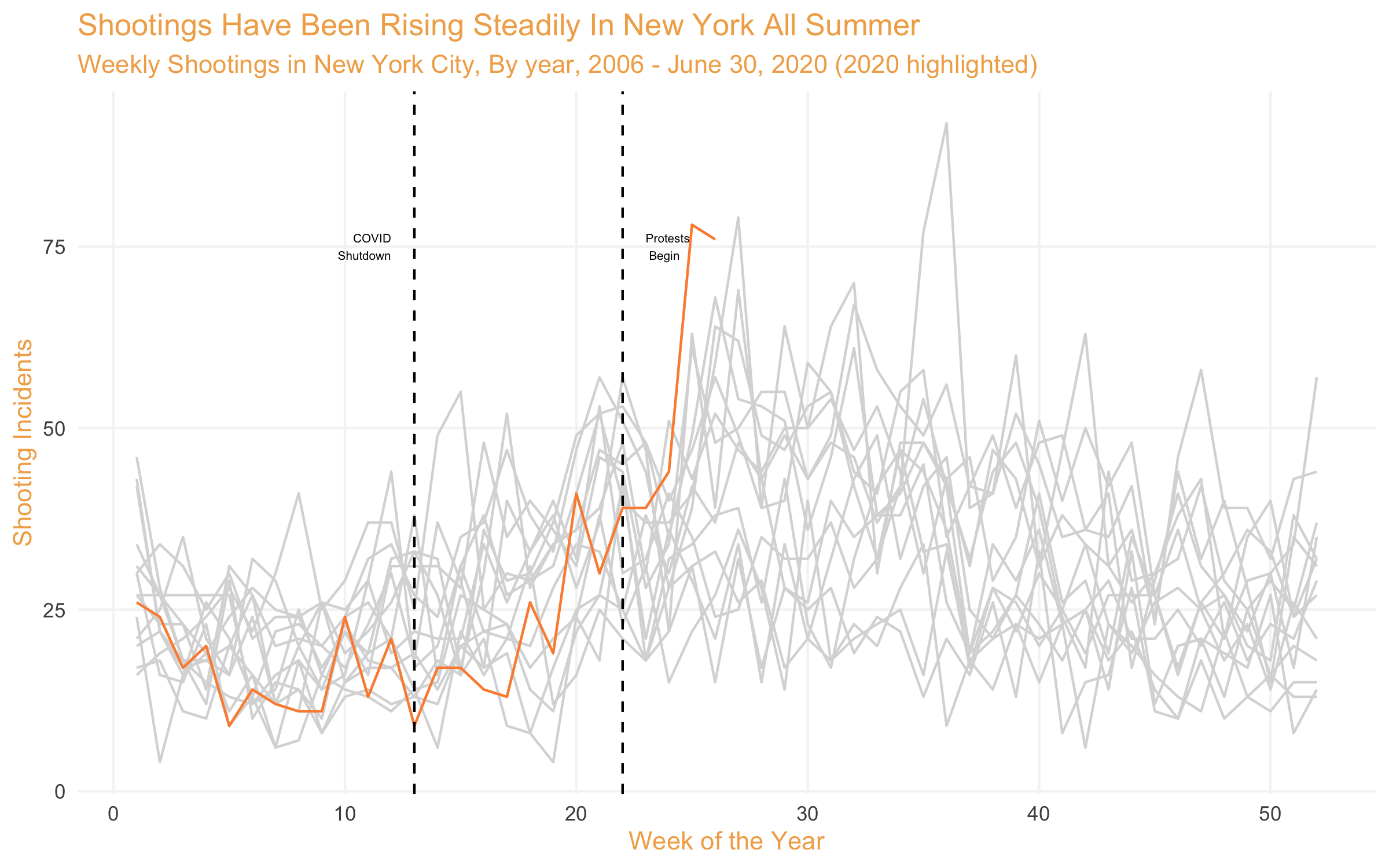 As with the rest of the city, official data indicate that the NYPD withdrew slightly following the coronavirus lockdown, with ratios of arrests to complaints—a measure of police response to crime—falling in early April. But as crime rose, those figures rebounded, with arrest ratios for felony assault, murder, and robbery all reaching historic highs. 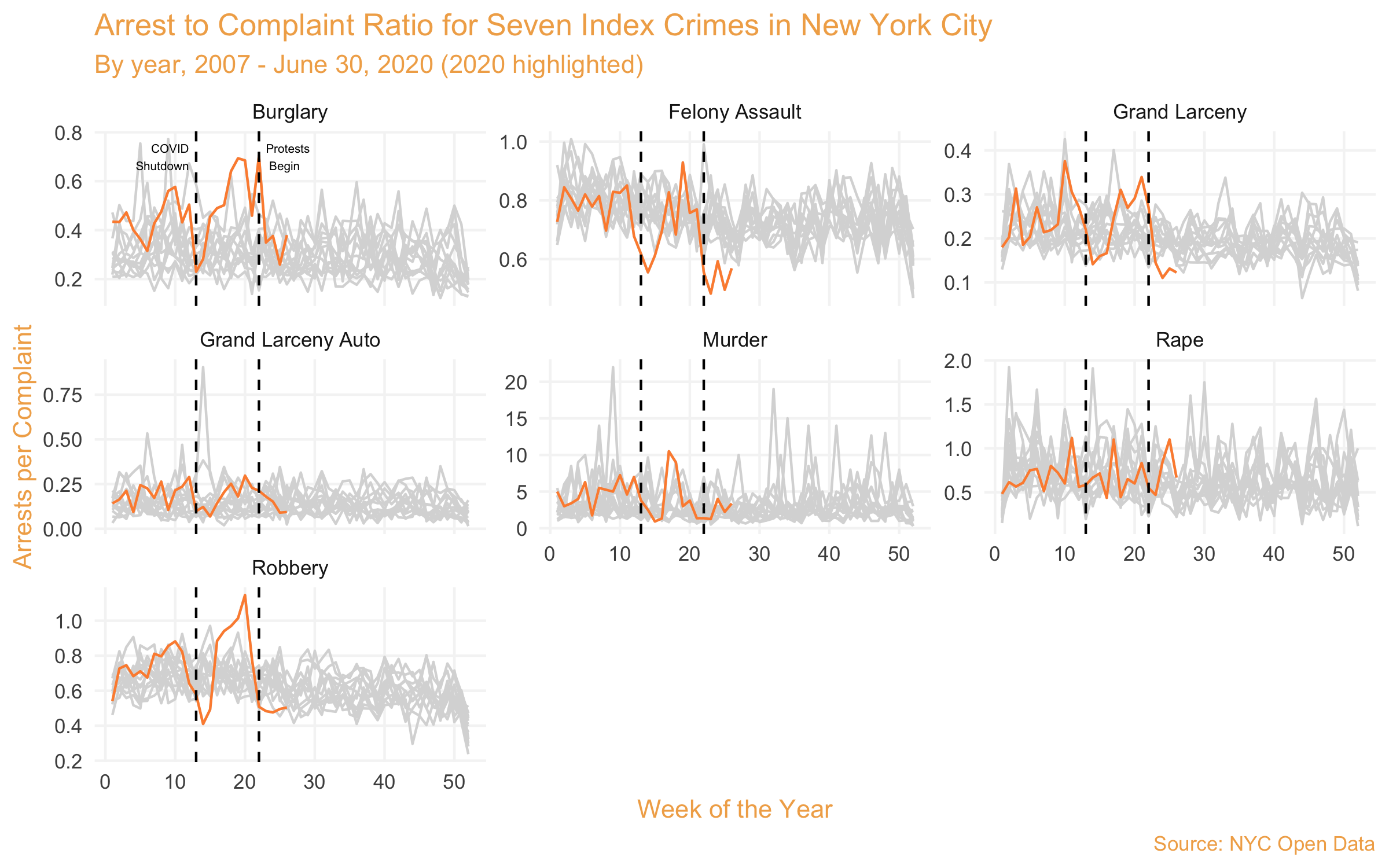 Then, the protests came. In the first full week following George Floyd's death, data show, arrest ratios plummeted. That trend persisted through the end of June, although the mayor's office claims that they have since rebounded.

The data, in other words, paint a picture of a rising crime spike to which the NYPD was adequately responding, until anti-police protests broke out across the city. New York mayor Bill de Blasio (D.), whose office did not respond to a request for comment for this article, has called the rising crime wave a "perfect storm" of events, but a report from his office obtained by the New York Times specifically blames the continued increase in violence on falling gun arrests.

The drop in arrests has caused some critics to charge the NYPD with an intentional "slowdown," responding to anti-police sentiment in the city by stepping back amid a crisis of violence. The department, which did not respond to a request for comment, has itself cited "the strain of deep budget cuts," a wave of retirements, and the drag on department resources required to oversee massive protests in the midst of a pandemic.

That position is in large part a product of aggressive cuts to the NYPD made by de Blasio, who has publicly aligned himself with the anti-police protests. In mid-June, Police Commissioner Dermot Shea was forced to disband a 600-man plainclothes unit tasked with combating violent crime; later that month, de Blasio announced plans to cut $1 billion from the NYPD's $5.5 billion budget—a move that has attracted criticism both from the police union and from black leaders in New York.

While the NYPD denies that police officers are deliberately slowing down, some beat cops see it differently. One Brooklyn police supervisor told the New York Daily News that his officers are demoralized: "As far as going the extra yard, that’s not happening. Guys are not getting out of their cars. They’re not going up to guys on corners."

"If one feels a lot of restrictions and if they are going to be penalized for violating those restrictions, they are less likely to do anything and I think that is part of what is going on," Eli Silverman, a professor at John Jay College of Criminal Justice, told New York 1.

Whether due to tightly stretched resources or lowered morale, the slackening of NYPD activity is likely having an effect on crime in the Big Apple. The trend mirrors that on display in Minneapolis, where crime spiked following the start of protests, leading to a drop in police activity that, in turn, may have driven crime still higher.