Decline in searches mirrors, might contribute to, explosion of gun violence

The embattled Minneapolis Police Department has mostly ceased stopping and searching residents of the city, as resources are stretched thin by anti-cop protests and surging gun violence.

Official data released by the MPD show that cumulative stops fell 36 percent in the week after George Floyd's death at the hands of three officers, sparking nationwide protests. That trend has persisted—over the week between July 6 and July 12, MPD officers made just 193 stops, down 77 percent from the same week in 2019.

Stops involving searches of people or their vehicles have also plummeted. MPD conducted just 20 over the week of July 12, and 11 the week before—87 and 90 percent declines, respectively, from the preceding year.

Such stops and searches are thought to play a critical, albeit controversial, role in keeping criminals and deadly firearms off the street—an analogous decline drove up homicide in Chicago. As such, the drop-off in searches may be fueling the ongoing violence.

This slackening of day-to-day enforcement, an MPD press officer told the Washington Free Beacon, represents a department stretched to its limits by an unprecedented spate of shootings in the weeks since Floyd's death. But it may also reflect police discomfort with day-to-day interactions in a city that is now ground zero for the police defunding movement. That in turn may be exacerbating the violence—another link between anti-police sentiment and surging crime.

Police stops and searches—sometimes referred to as "stop-and-frisk"—are a sometimes-controversial crime-fighting tool which proponents say helps combat gun crime in particular. In the lead-up to Floyd's death on May 25, Minneapolis police regularly stopped and searched residents and their vehicles. In the preceding two full weeks, for example, there were 263 stops involving searches, compared to 196 the preceding year. 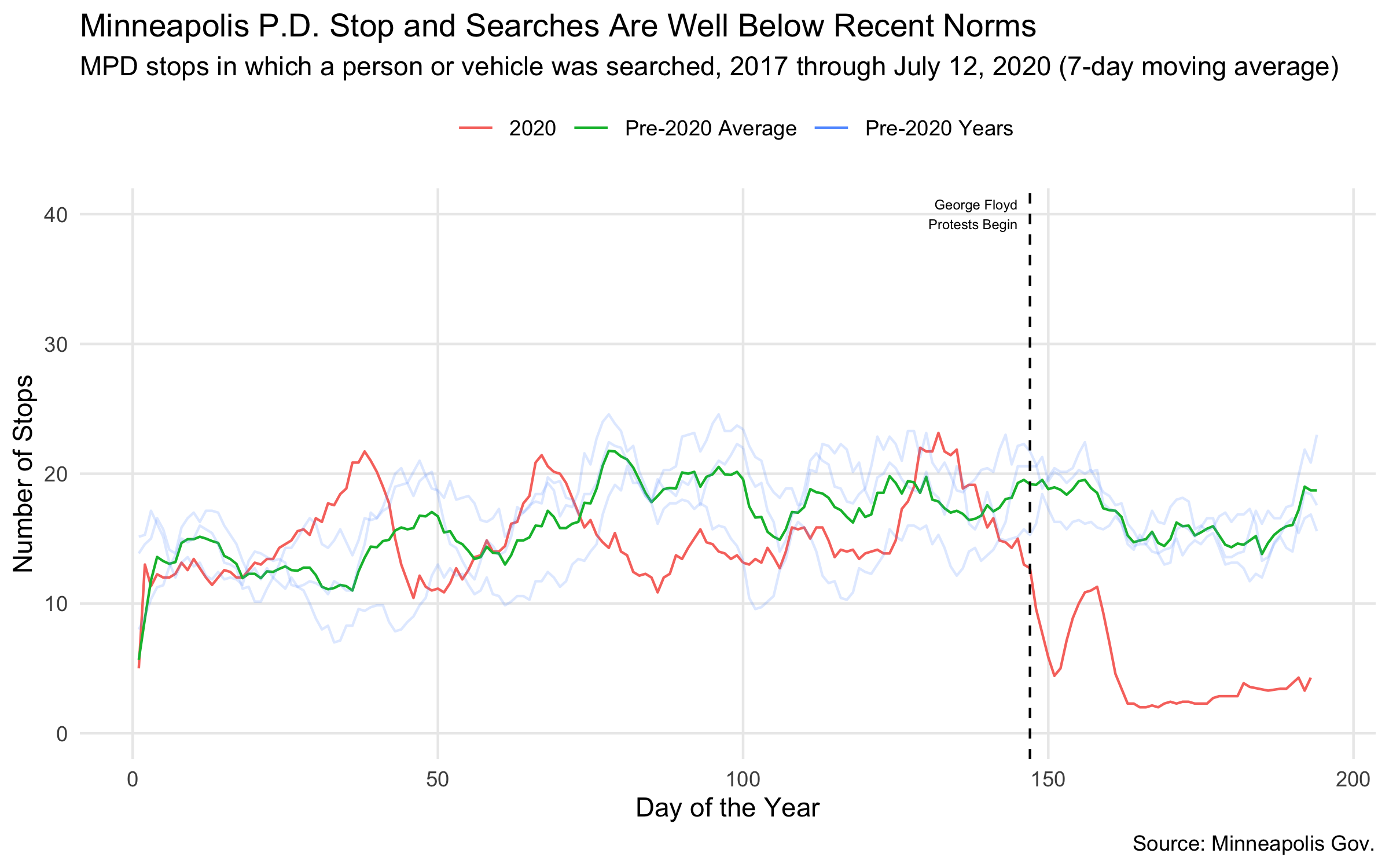 But in the wake of Floyd's death—and the ensuing protests and outbreak of gun violence—searches have plummeted. The MPD, a department with some 800 officers, conducted fewer than three searches per day in the most recent week available. 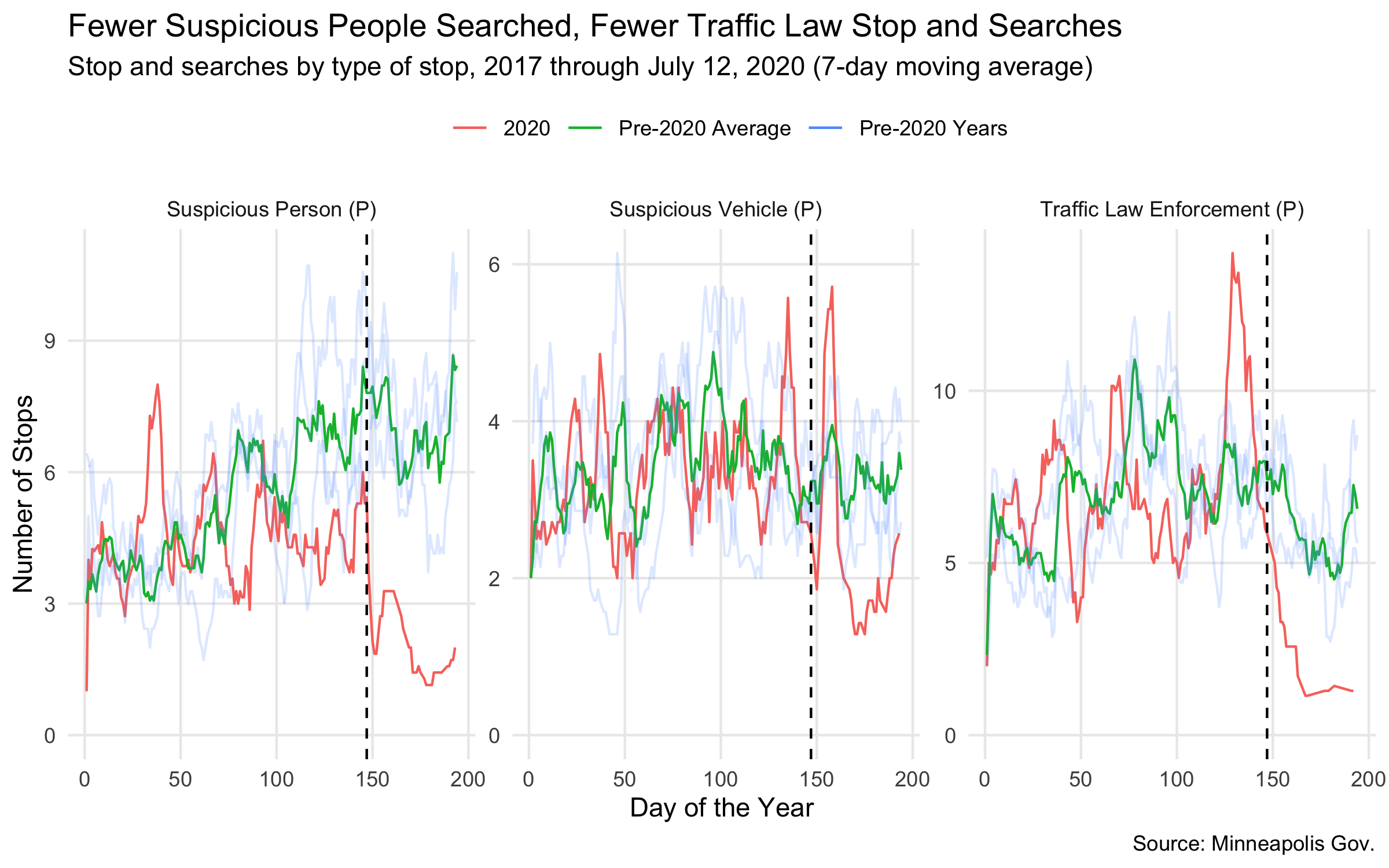 MPD public information director John Elder told the Free Beacon that the decline was attributable to the surge of violence the city has seen in recent weeks.

"Officers are busy responding to an increase in violence and 911 calls," Elder said by email. "Self-Initiated Field Activities are always going to be down when you have the spike and surge of incoming priority one calls. Should be evident that if we are running call to call, we don't have the time or ability to engage in traffic and other stops."

That spike in violence, the Free Beacon previously reported, also began in the wake of Floyd's death, city- and nationwide protests, and moves by the Minneapolis city council to replace the MPD. Both measures of gun shots and gun assaults spiked to rates far above the past 10 years. More recent data also show an increase in the homicide rate.

The MPD's view, as expressed by Elder, is that the decline in stops is caused by the increase in violent crime. But it is also possible that the reverse is true: A drop in stops and searches can mean more criminals and more guns on the streets, exacerbating a violent crime problem.

This may have been the case in Chicago in 2016, when the city saw a shocking 58 percent increase in homicides in one year. An analysis by University of Utah professors Paul Cassell and Richard Fowles found that the murder wave coincided with a significant reduction in stops by the Chicago P.D., in turn caused by a settlement with the ACLU.

Cassell has speculated, based on Free Beacon reporting, that Minneapolis may now be feeling a similar "ACLU Effect," attributable to the growing political hostility to the police. In the case of Minneapolis, police may draw back from stops and searches, which police critics often claim are racially biased and can lead to deadly encounters. The drop-off in stops comes as the Minneapolis City Council moves forward on abolishing the MPD entirely, a reaction to the Floyd killing and ensuing public hostility.

Elder insisted there was "zero" reason to believe that the decline in stops was driven by such an effect. But Cassell suggested that it may play a role, contributing to a police drawback from routine stops that can drive up violence—and thereby lead to even more drawback.

"It will always be difficult to untangle the confounding variables," Cassell told the Free Beacon by email, "but from a public policy point of view, the policy lever that needs to be pulled is to restore Minneapolis street stops back to where they were before the shooting violence started spiking."