Over 100 homicides made July Chicago's most violent month in decades, extending the rising tide of crime that, police data show, began at the same time as anti-police protests spawned by the death of George Floyd.

With 105 deaths, July was the city's deadliest month since 1992, but still only slightly more deadly than June's 92. The weeks since Floyd's death, in fact, are some of the most violent in 20 years of official data.

Challenging popular media presentation of the post-Floyd protests as largely peaceful, the first week of protests coincided with the highest counts of arson, burglary, homicide, gun violence, and public disorder incidents on record. While rates of the lesser crimes have abated, murder and gun violence remained elevated through the most recently available data.

These alarming figures make Chicago the hardest hit of the many major cities currently experiencing a surge in gun violence and homicide. The timing of the spike also suggests that the still ongoing protests against Chicago police may be a driving force behind the crime wave—mirroring trends previously identified in Minneapolis and possibly at play in other cities. 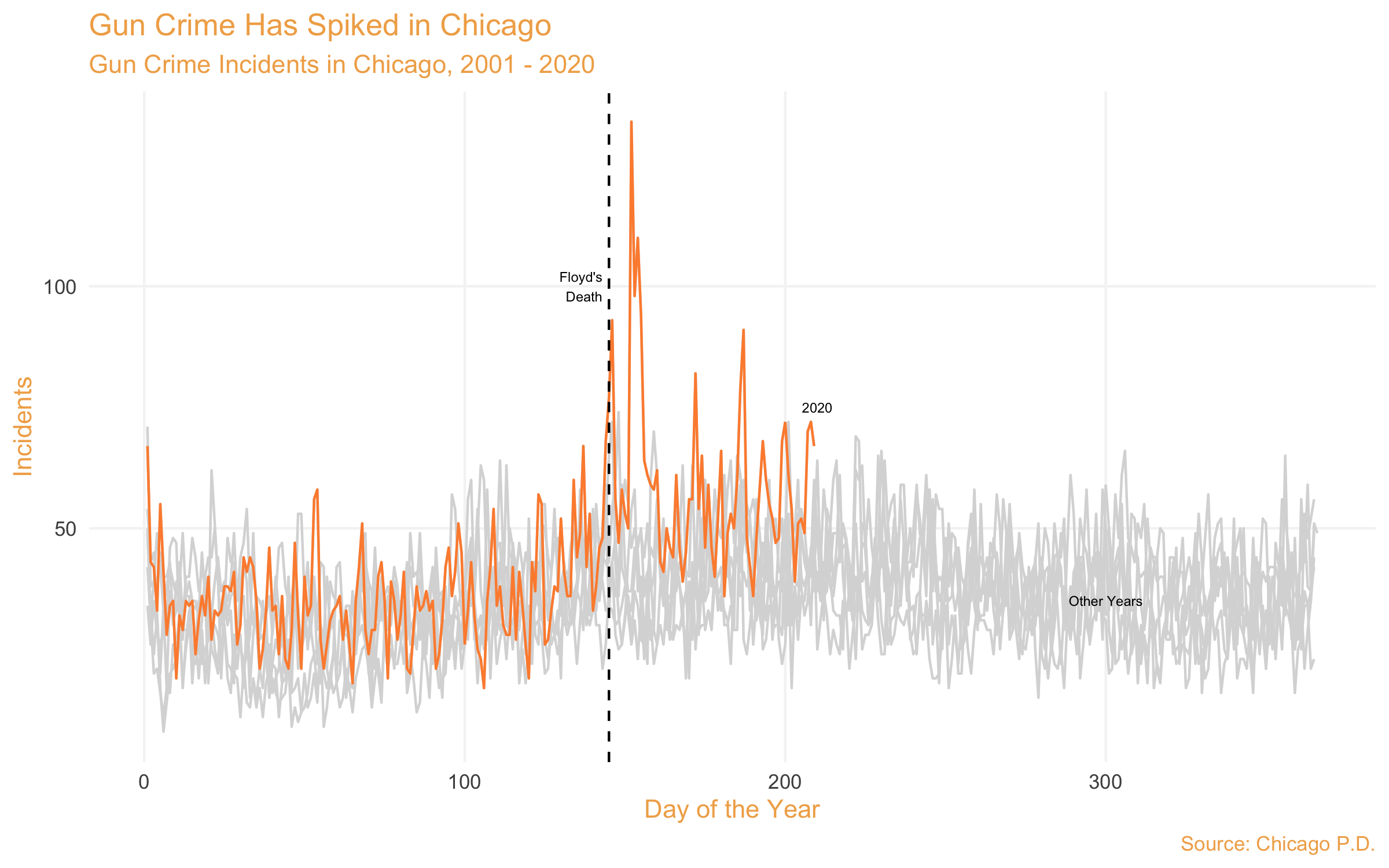 The police data paint a picture of a city in disarray. Gun crime in Chicago spiked in the days following the death of George Floyd on May 25, official police data show. At its peak on May 31, the Chicago Police Department reported 134 gun violence incidents.

Rates have declined from there but remain high. In 20 years of data, 9 of the 10 days with the most incidents occurred in 2020. 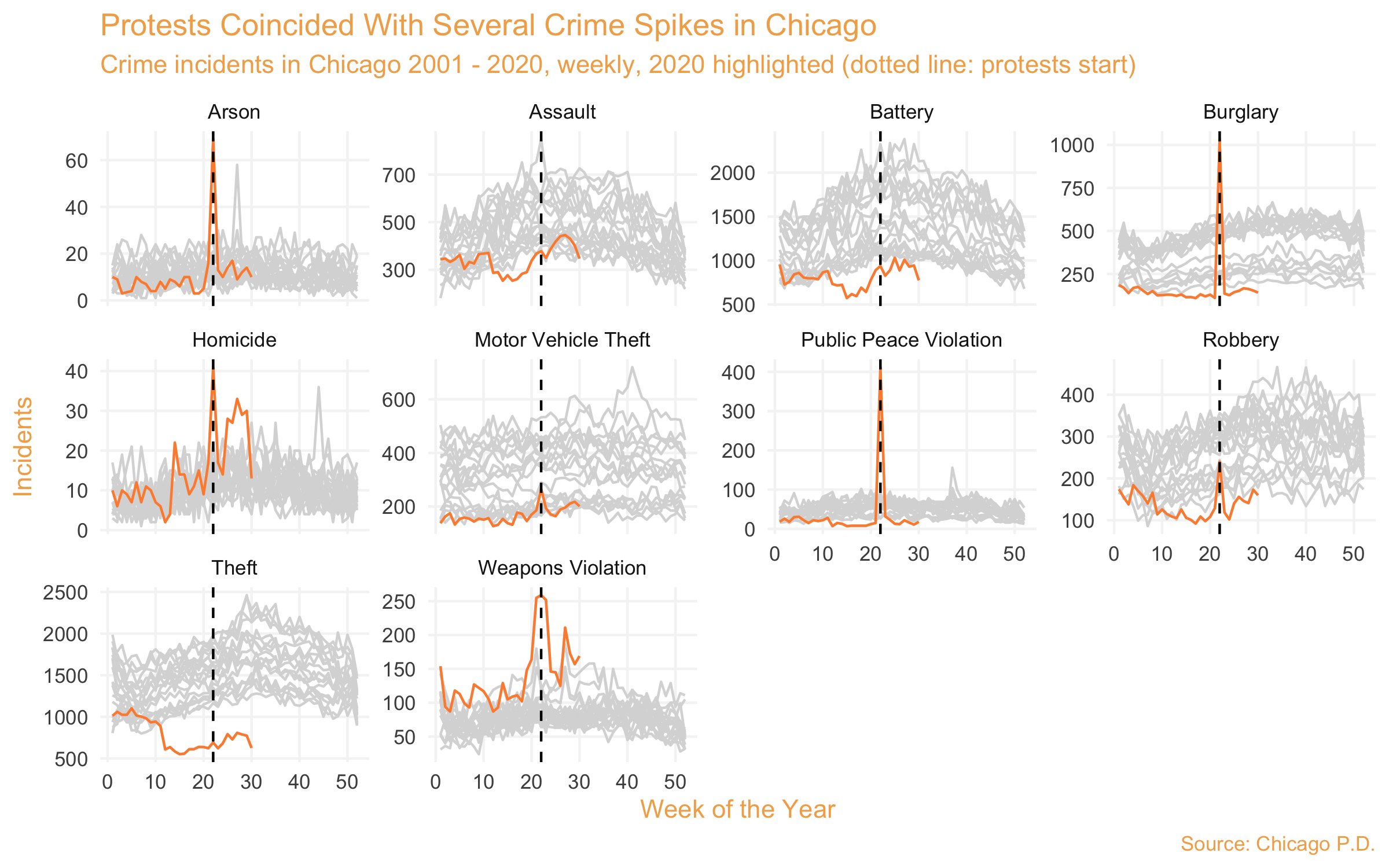 The beginning of protests further coincided with unprecedented spikes in other crimes, including arson, burglary, and public peace violations. It also saw an explosion of homicides, with 41 deaths in the week following Floyd's. Unlike the other spikes, however, the homicide wave has not abated, with a cumulative 197 homicides since June 1.

Those gunned down include seven-year-old Natalia Wallace, who was shot at her family's Fourth of July celebration, and nine-year-old Janari Andre Ricks, who was shot and killed as he played with friends behind his home.

This wave of homicides is part of a larger trend playing out in big cities across the nation—nearly three-quarters of the largest cities have seen homicide rates rise by double digits compared with 2019. But Chicago's murder wave stands out, accounting for roughly one in eight added homicides across the 50 biggest cities.

This particularly bloody period has prompted the deployment of federal agents to Chicago, but only after a standoff between Mayor Lori Lightfoot and President Donald Trump, with the former resisting the latter's offers of federal assistance. Lightfoot eventually relented, and federal agents have already arrested a number of gun offenders in the city as part of Operation Legend.

The scale and timing of Chicago's murder spike raise an obvious question: Could protests, which have for months demanded the defunding or abolition of the Chicago Police Department, be driving the crisis?

Lightfoot has blamed the surge on guns purchased in other states, especially Indiana, and brought in to the city. This is a common refrain from Chicago Democrats, who support the city and state's ultra-strict gun-control laws, but it doesn't line up with the data. 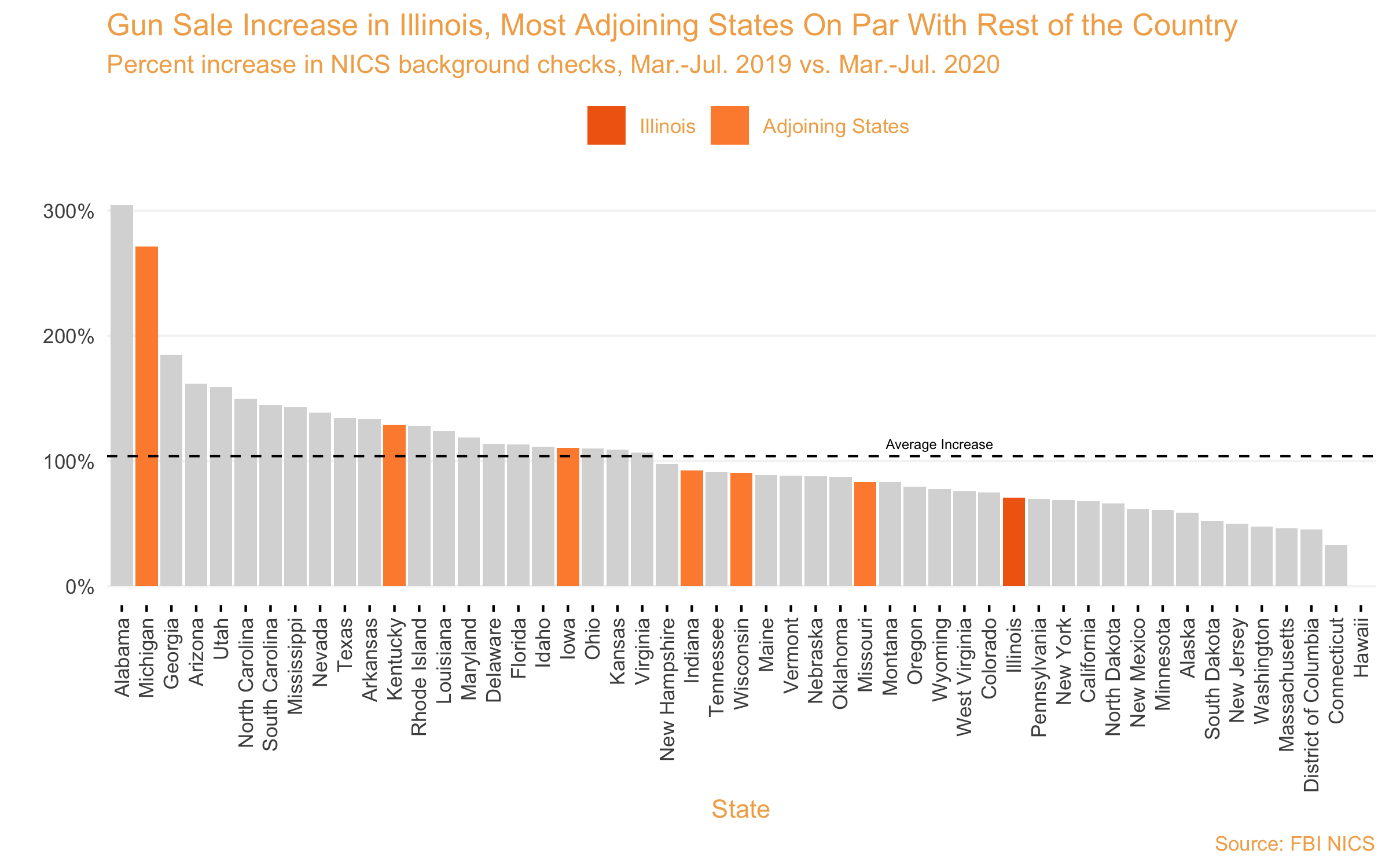 Historically, the plurality of illegal firearms recovered by Chicago police come from in-state. And while there has been a nationwide surge in gun-buying, research indicates its effect on homicides is real but small, increasing national murder totals by only about 5 percent—much smaller than the 105 percent increase in Chicago homicides between June and July 2019 and the same months in 2020.

It's also not clear that the surge has affected Illinois or surrounding states disproportionately; most have seen year-on-year increases in gun buying on par with the national average. Only one, Michigan, has seen a surge in the background checks used to measure gun purchases, attributable to a change in its licensing laws.

Rafael Mangual, a legal policy fellow at the Manhattan Institute, told the Washington Free Beacon that while the peculiarities of the coronavirus pandemic and Cook County's bail reform may also have played a role, it was likely that the protests and their effects on the police may be driving the crime wave.

"I think it's quite clear that the protests and riots contributed to the spike by creating a void as police were redirected from their normal duties to crowd control," Mangual said. "Over the longer-term, I wouldn't be surprised to see demoralization and fear sweep through the CPD, which, as we saw in 2016, could lead to a decrease in proactivity, which may very well be followed by a more sustained increase in violent crime."

Mangual pointed to research that linked a 2015 consent decree, placed on the Chicago Police Department in a deal with the ACLU, to a surge in homicides the following year. That decree, the research argued, constrained Chicago police officers' ability to engage in proactive "stops," which in turn are meant to reduce gun possession and violent crime.

In this, as in its crime trends, Chicago follows northern neighbor Minneapolis. As the Free Beacon previously reported, Minneapolis saw a similar spike in gun violence following the death of Floyd and ensuing protests. That increase coincided with a precipitous drop in the Minneapolis Police Department's stops, which the department attributed to increased crime but may also have driven the violence wave.

Recent data on Chicago's police stops are not yet publicly available, but there is at least some evidence of discontent in the department's ranks. Most prominently, Deputy Chief Dion Boyd committed suicide in late July, the ninth department officer to do so in two years.

Such an incident may indicate a police department demoralized by protesters' demonization—a recipe for their withdrawal from the streets and, consequently, a further increase in violence and death.