Fears of anti-Israel violence on campus amid Palestinian terror spike

Pro-Palestinian activists at the University of Berkeley caught on video chanting "we support the intifada" and another activist at Brooklyn College calling for the annihilation of Israeli settlers are sparking outrage among defenders of the Jewish state.

The support for violent resistance against Israel on U.S. college campuses comes amid a spike in Palestinian terrorism committed against Israelis that has claimed several lives.

Pro-Israel activists have begun to express concern about these calls, which appear to endorse violence against Jewish people and could exacerbate tensions at the schools.

The pro-Palestinian demonstrations have been led in recent days by campus affiliates of Students for Justice in Palestine (SJP), an anti-Israel organization that has disseminated anti-Semitic propaganda and supports boycotts of the Jewish state.

On U.C. Berkeley’s campus last week, anti-Israel activists were caught on film chanting, "We support the intifada," a reference to violent episodes in Israel that has led to increased acts of terrorism by the Palestinians.

The Berkeley demonstration took place hours after a 72-year-old Jewish man was stabbed while riding the bus.

"Intifada, intifada, we support the intifada," a man can be heard screaming into a microphone as dozens of pro-Palestinian activists repeat the chant. The chant leader is seen standing in front of a sign reading "Israeli apartheid."

Similar types of protests, dubbed a "day of action" by anti-Israel activists, occurred on at least 30 other campuses across the country.

The SJP affiliate at Brooklyn College held two such demonstrations and posted a message to its school-associated Facebook page celebrating "the third intifada." 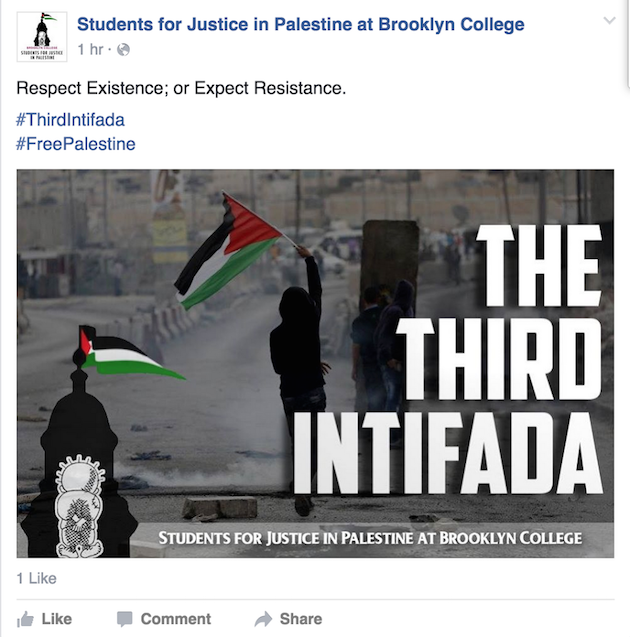 "The literal meaning of intifada is ‘shaking off,’" SJP said in the post. "In Palestinian communities, the word is said with pride to invoke a history of resilience and resistance to occupation, displacement and oppression."

During the last two intifadas in Israel, Palestinian terrorists attempted to murder Jews and rampaged through cities such as Jerusalem. A spate of stabbings and other attacks in the past weeks have wounded dozens of Israelis and killed others.

One SJP supporter at Brooklyn College went so far as to tweet—and then delete—a message stating, "Annihilate the settlers #intifada #Palestine," according to a screenshot obtained by the Washington Free Beacon.

Pro-Israel leaders who work with these campuses are expressing concern that the pro-Palestinian rhetoric is crossing and line and could lead to violent incidents on campus.

"A Palestinian terrorist stabbed an elderly woman in a bus station, and Berkeley’s SJP students followed up immediately by chanting for an anti-Israel intifada," said one senior official with a pro-Israel organization that liaises with campuses. "The Berkeley students called it their ‘Day of Action,’ except by action they apparently meant terrorism."

"These sorts of rallies foster fear on college campuses, and adults will eventually have to intervene to put a stop to them," the source said.

At Indiana University-Purdue University Indianapolis (IUPUI), the SJP affiliate posted to Facebook a message about the values of intifada.

Campus insiders following the demonstrations explained that these pro-Palestinian activists are attempting to sanitize the word "intifada" by removing its implications of violent resistance.

"An intifada involves a large number of people, and the word ‘shaking’ is inspired by the mass effect it causes," SJP at IUPII posted on Facebook. "It is often used as a term for popular resistance against oppression." 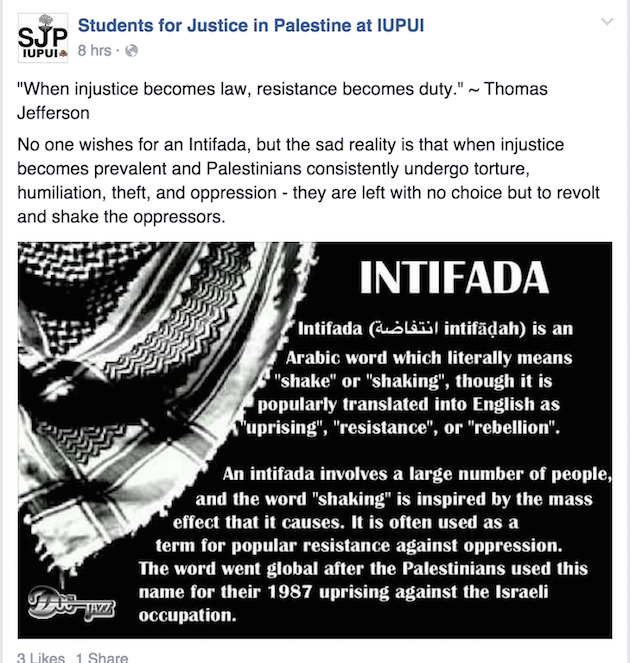 "No one wishes for an Intifada, but the sad reality is that when injustice becomes prevalent and Palestinians consistently undergo torture, humiliation, theft, and oppression – they are left with no choice but to revolt and shake the oppressors," SJP wrote in the post.

Dan Mogulof, a spokesman for U.C. Berkeley, said that the university takes the issue of free speech and expression very seriously, even if the language used might be offensive to some.

"We don’t endorse that demonstration" or any demonstration on campus, Mogulof said. "These aren’t events we allow. Rather they’re allowed by the Supreme Court of the United States."

"As disturbing as it is for many of our community members," the school remains committed to the principles of free speech as provided under the U.S. Constitution, he said.

The university is working to foster dialogue among groups and has "deep concerns" about the safety of all students.

"The well-being and security of all Brooklyn College students, faculty, and staff is our utmost priority, and we are committed to ensuring a safe campus environment where free speech is assured, and where all members of our campus community may express themselves without fear of reprisal," Jason Carey, director of the school’s communications and marketing team, said.

All on-campus events are required to follow the school’s stated rules, Carey added.

"Events that occur off campus, however, are subject to New York Police Department rules and regulations and include laws that strictly prohibit defacement of public property—for example sidewalks. These laws will be enforced," he said.

Brooklyn College is working to foster dialogue between students groups and "interaction that promotes understanding."

"Even so, we do not condone threats of violence or incitement to violence in any form," Carey said.