Lindsay Crouse, who earned notoriety after disclosing that her ex-boyfriend is dating Lady Gaga in a 2020 op-ed, said in a May 8 tweet that protesters should target the Chevy Chase Club because that way, she said, their cries "will reach not just Kavanaugh but also Justice Roberts—both are members." She deleted the tweet, but only after it elicited praise from activists who shared the address of the club across the platform. 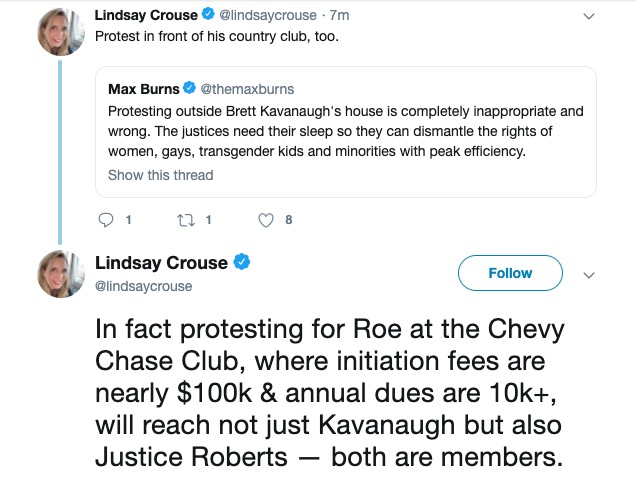 There is a near consensus among legal experts that targeted protests against federal judges are criminal. A 1950 law expressly prohibits any picketing "with the intent of interfering with, obstructing, or impeding the administration of justice, or with the intent of influencing any judge."

Times guidelines bar staff from "posting anything on social media that damages our reputation for neutrality and fairness."  Crouse’s posts come just over a month after the paper’s executive editor, Dean Baquet, issued a memo to staff pressing them to spend less time on Twitter and said its extensive use would "damage our journalistic reputations." That memo was prompted by internal concerns that the conduct of some staff may interfere with the ability for others, such as court reporters, to cultivate sources or gain access.

Baquet also pressed staff in 2017 to exercise transparency after removing a social media post and "quickly acknowledge the deletion in a subsequent tweet." Crouse did no such thing.

Neither the Times nor Crouse responded to a request for comment.

Crouse’s tweets are the latest example of bubbling tensions between staff who want to openly advocate for their political views and management who wish for the paper to appear impartial. The Times, which has been the epicenter of the debate in legacy media over objectivity, fired editor Lauren Wolfe last year after she tweeted that she felt "chills" after seeing President Joe Biden’s plane land.

Aside from columns asking questions such as, "How do you compare yourself with Lady Gaga?" after she dates your ex, Crouse has written about how former Supreme Court justice Ruth Bader Ginsburg served as her "fitness idol." Her focus for the Times opinion section is "gender, ambition, and power," according to her author bio.

Since the leak of the draft Dobbs decision, conservative justices have been the target of heated protests outside their homes. On Wednesday, the Washington Free Beacon reported on an internal DHS memo outlining threats from pro-abortion extremists against members of the court and clergy.

"Domestic violence extremists (DVEs) and criminal actors have adopted narratives surrounding abortion rights to encourage violence, likely increasing the threat to government, religious, and reproductive health care personnel and facilities and ideological opponents," the memo reads. The memo later states that most of the threats against justices and their staff are circulating on social media.

Earlier this month the Senate passed a bipartisan bill bolstering security for members of the Supreme Court and their families. That legislation has since stalled in the House, with Democratic leadership refusing to provide a date for an expected vote.