REVIEW: 'Greta Thunberg and the Climate Crisis' by Amy Chapman

Remember Greta Thunberg, the Swedish child activist who became a media darling by skipping school to protest climate change? The COVID-19 pandemic has really done a number on her celebrity status. She's no longer a child, for example, having turned 18 last year. A Democrat was elected president, giving millions of liberals an excuse to stop caring about the things they pretended to care about when Donald Trump was president.

The hierarchy of elite liberal hysteria has shifted. Being up in arms about the "existential threat of climate change" seems so quaint and out of touch compared to the "existential threat of structural racism." Even the scientists seem to agree. Racism is better for ratings and requires just as little effort to care about symbolically. Nancy Pelosi and Chuck Schumer can take a knee wearing Kente cloth, woke corporations can hire a bunch of diversity consultants, and the rest of us can tweet #BlackLivesMatter or post a black square on Instagram.

On a related note, it would be hard to find a more egregious example of "white privilege" than this recently published New York Times article about deranged liberals who aren't having kids due to their crippling climate anxiety. "I literally can’t go to a dinner party without the collapse of a civilization being at least mentioned, if not being the main topic of conversation," a rich white woman told the Times. "Arable land is decreasing around the planet. We might not have enough food."

This raises an interesting question. Who, exactly, is the intended audience for all these Greta Thunberg children's books? The most recently published one (in the United States), Greta Thunberg and the Climate Crisis, is intended for 7- to 9-year-olds. Children who wouldn't exist if their parents actually cared about the planet, right? To be fair, they were conceived during the Obama administration when liberals were still riding high after ending racism by voting for the articulate black guy.

Printed in Dubai, the book purports to be "the unofficial biography" of Thunberg, along with "the official facts on climate change." The author, Amy Chapman, delivers concise paragraphs between clipart images of oil rigs and melting icebergs. Greta's story, she writes, is an inspiration to all children because it proves that "anyone can make a difference." At the very least, it proves that anyone can become famous by publicly agreeing with the professional journalists (and other liberal activists) who make the news. 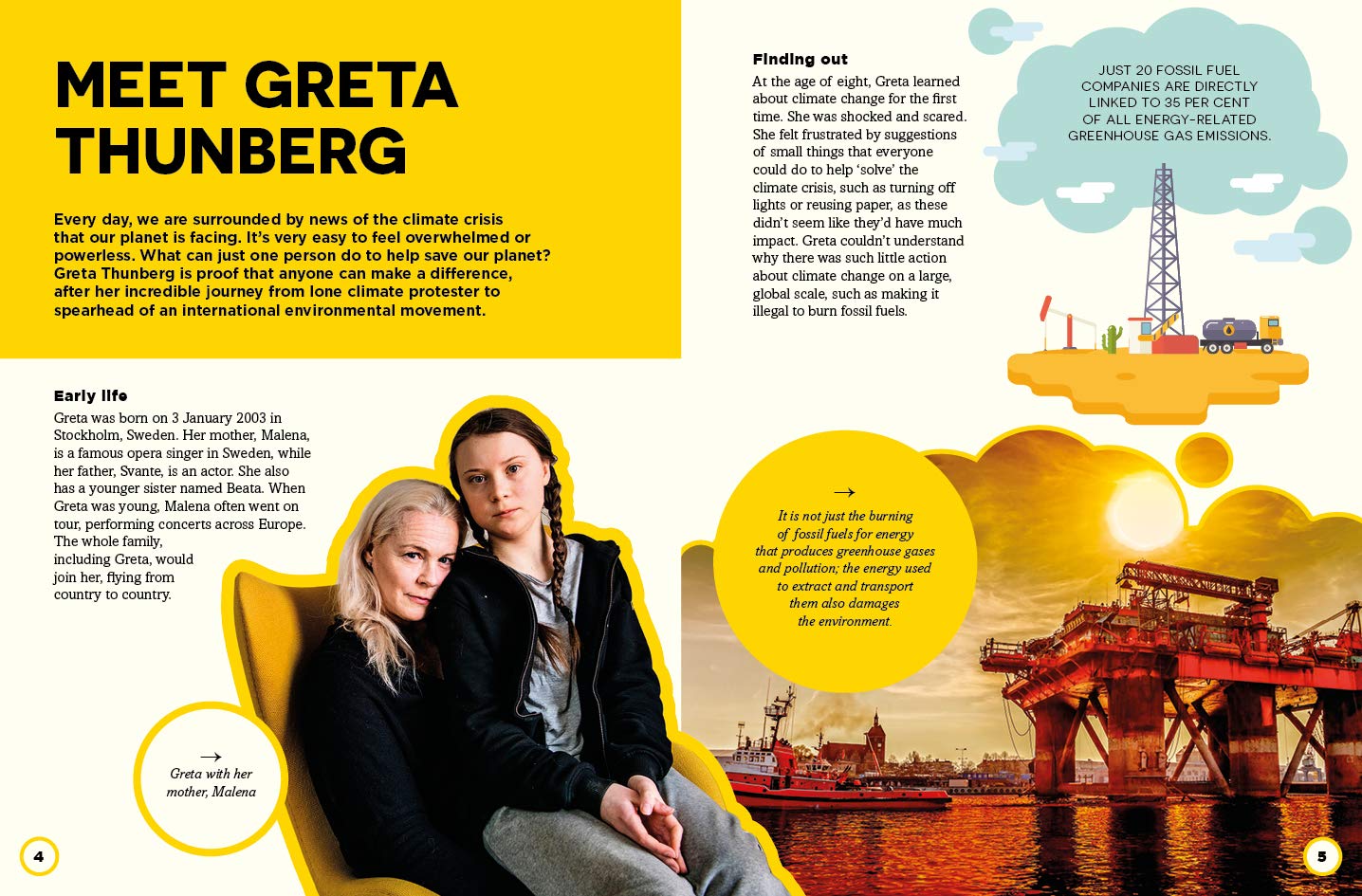 Chapman describes the unusual media hysteria surrounding the 2018 publicity stunt that would make Thunberg a household name among MSNBC viewers and New York Times subscribers. Just 15 at the time, Thunberg decided to protest climate change by skipping school and hanging out in front of the Swedish parliament. "When Greta started her protest in August 2018, she posted about it on Instagram and Twitter," Chapman writes. "Her posts were shared by other social media accounts, and then quickly picked up by local and international news reporters." Within a few weeks, she was giving TED talks and appearing at Greenpeace conferences. Inspiring!

In terms of actual accomplishments, Greta's story is a rather underwhelming one. About 1.4 million people took part in the Global Climate Strike she organized in 2019, which is about one-tenth the number of Americans who participated in the antiracism demonstration in the summer of 2020. Arguably her most impressive accomplishment—sailing across the Atlantic Ocean on a racing yacht to attend the 2019 U.N. climate change summit—was a poorly conceived publicity stunt. Thunberg went on to express "concern that the massive climate protest movement has achieved nothing." She wasn't wrong.

Perhaps that's why the book is so heavily focused on symbolic posturing. After all, that's what most political activism amounts to these days. Thunberg was named Time magazine's person of the year in 2019, the youngest person to receive the honor. "Climate strike" was declared the 2019 word of the year by Collins Dictionary. There's an entire section devoted to "Tweets and trolling," which highlights Greta's online beefs with Donald Trump, Vladimir Putin, and other world leaders who "feel threatened by the power of her movement," which hasn't accomplished anything, but promises to deliver "a climate revolution … whether people liked it or not," in Thunberg's own words. 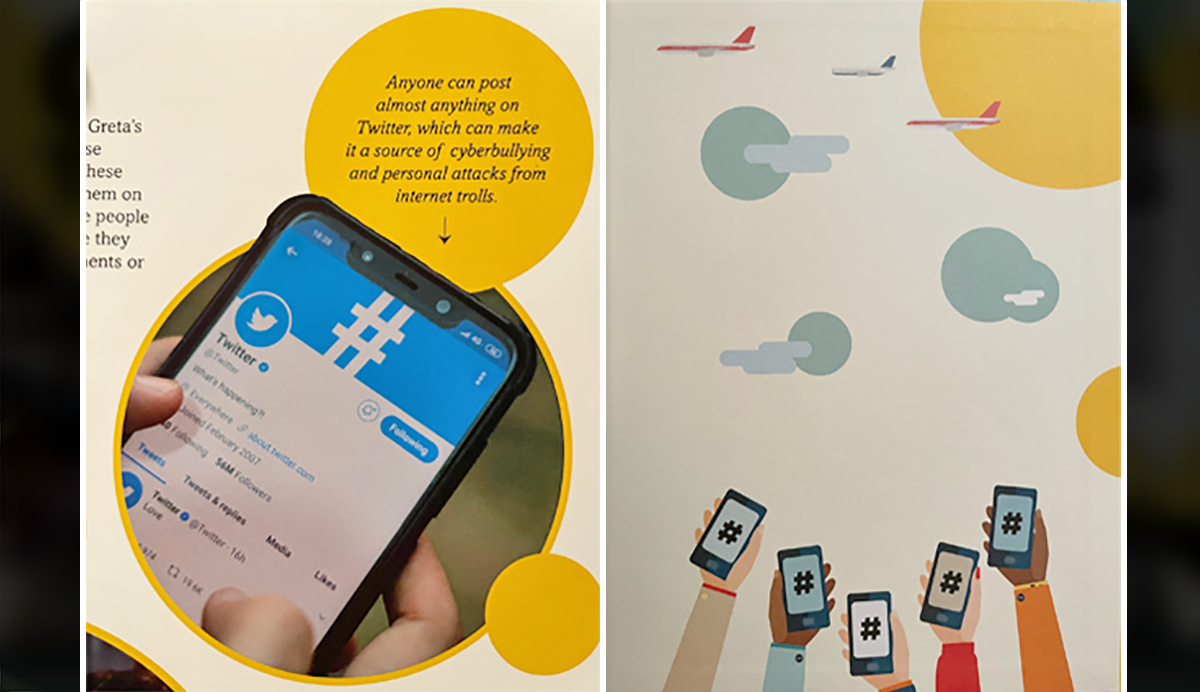 One can hardly blame a big publishing house like Franklin Watts (Hachette) for trying to cash in on Greta Thunberg's 15 minutes of fame. But it seems fair to question their judgment in light of how competitors are targeting the woke parent demographic. For example, Greta Thunberg and the Climate Crisis currently ranks 2,059,618th among books sold on Amazon. Race Cars: A children's book about white privilege, an illustrated guide for parents of 6- to 9-year-olds to use "as they engage in meaningful discussions about racism and inequality with their kids," ranks 187,186th. (No, I'm not making this up.)