CNN Cuts Ties With Writer Who Praised Hitler for Years

CNN says it cut ties with a writer who took to social media to praise Adolf Hitler, but his admiration for the Nazi leader who killed more than six million Jews was well-established prior to this weekend's post.

Adeel Raja, a Pakistani-based CNN contributor whose byline has appeared on the network's website at least 54 times, wrote on Sunday in a now-deleted post, "The world today needs a Hitler." CNN said Sunday night that due to Raja's "abhorrent statements," he would "not be working with CNN again in any capacity." 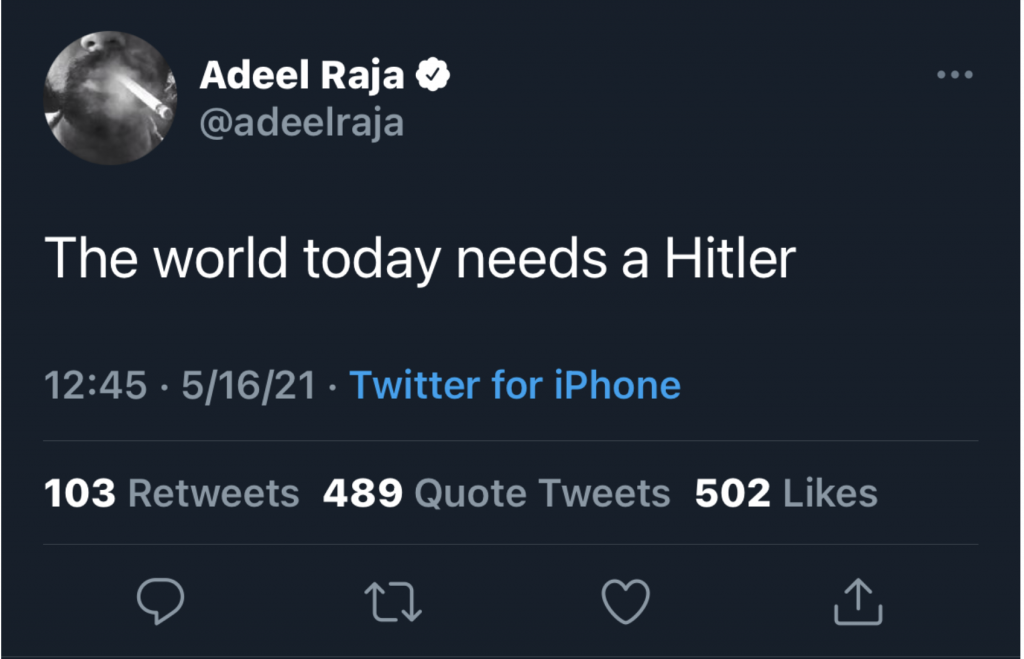 Raja’s Sunday post, however, is just one of several praising Hitler and criticizing Israel in vitriolic terms. In other tweets, such as one during the World Cup in 2014, Raja wrote, "The only reason I am supporting Germany in the finals is—Hitler was a German and he did good with those jews [sic]!" In another 2014 tweet, Raja said, "Hail Hitler."

Raja claims on his LinkedIn account that he has contributed to CNN for more than seven years.

The ongoing violence has incensed anti-Semites and anti-Israel activists online, including the country’s detractors in Congress, like Reps. Ilhan Omar (D., Minn.) and Rashida Tlaib (D., Mich.). They have accused Israel of terrorism but have not condemned Hamas for its actions.

The news network's decision to cut ties with the Nazi admirer was not covered by CNN reporters Brian Stelter and Oliver Darcy in their Monday newsletter on the media.