One of the driving forces behind a California teachers' union's anti-Israel efforts publicly called Zionism a "sick bourgeois" ideology and called for an end to "Israeli war crimes and colonization."

Soni Lloyd, a left-wing activist and teacher who unsuccessfully ran for the presidency of the United Teachers Los Angeles union at the beginning of 2020, described the United States as an "evil empire" that funds "ugly Zionism" around the world in a Facebook post on May 14. Lloyd did not respond to a request for comment on that Facebook post or another where he posted a cartoon of Israeli prime minister Benjamin Netanyahu dropping bombs on Gaza with the help of the United States. After the Washington Free Beacon reached out for comment on those posts and others where Lloyd expressed anti-vaccine sentiment, he locked his Facebook profile. 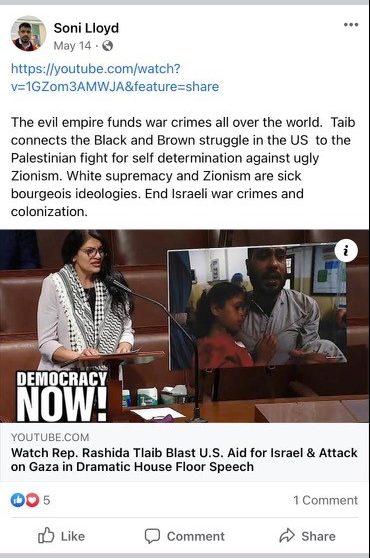 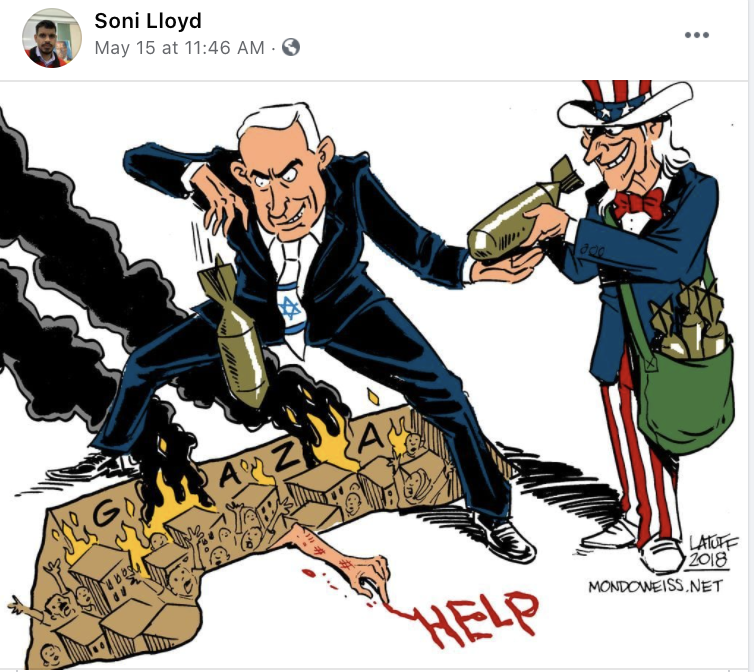 The UTLA is facing accusations of anti-Semitism on multiple fronts as critics say it is prioritizing a left-wing cause over issues facing students and families. A group of parents of California schoolchildren authored an open letter to the president of the UTLA demanding an "unequivocal apology for the anti-Semitism and intolerance coming from you and the union you lead." The group, California Students United, ripped into UTLA president Cecily Myart-Cruz for leading a union more concerned with condemning the Jewish state than reopening schools.

"The leadership of the union representing our children's teachers has no business singling out one country and its people, especially a people who have been victims of discrimination persecution, and genocide for generations," the letter stated. "The position of the union you lead has thrown gasoline on the fire of what was already a volatile, unsafe, and increasingly frightening environment for Jews."

The letter comes after leaders of the union passed a resolution on May 19 condemning Israel for the fighting in Gaza and calling for an end to U.S. aid for the Jewish state. The resolution is one of a number of resolutions being considered, and its passage makes it likely that the resolution will come up for a vote in the union's policy-making body, the House of Representatives. The next meeting of the House is in September.

Another resolution, obtained by the Free Beacon and which is currently being circulated within sections of the union, calls for the end of U.S. financial aid that is being used for "incessant warfare against an indigenous people in the Middle East."

"UTLA denounces the he [sic] recent bombings in the West Bank and Gaza by the Israeli army resulting in the deaths of hundreds of civilian people, mostly women and children," a copy of the resolution says. "The high intensity aerial warfare is unjust and inhumane. Palestinians have the right to self-determination free of violence and occupation."

In response to a request for comment on Lloyd's Facebook posts and the anti-Israel resolutions, a UTLA spokeswoman provided the Free Beacon with a statement that had been issued on June 1. In the statement, the union said the resolutions are part of a "democratic process" and that they do not represent the opinions of the UTLA. "Debate and disagreement are essential to democracy and to our union, even when there are deep, conflicting emotions on both sides," the union wrote. Its parent union, American Federation of Teachers, did not respond to a request for comment.

UTLA is not the only California teachers' union embracing anti-Israel causes. The United Educators of San Francisco voted in favor of a resolution that accused Israel of apartheid and war crimes and endorsed the anti-Semitic Boycott, Divestment, and Sanctions movement.

"As public school educators in the United States of America, we have a special responsibility to stand in solidarity with the Palestinian people because of the 3.8 billion dollars annually that the U.S. government gives to Israel, thus directly using our tax dollars to fund apartheid and war crimes," the teachers wrote.