Research highlights the link between the drug crisis and economic distress

The drug crisis touches every aspect of Americans' lives, with the workplace being no exception, a new study shows.

The number of drug overdose deaths occurring in the workplace rose by 24 percent annually between 2011 and 2016, researchers at the National Institute for Occupational Safety and Health (NIOSH) found, costing 760 lives in that time period alone.

To reach this conclusion, the researchers collected six years of statistics from the Census of Fatal Occupational Injuries, a survey administered by the Bureau of Labor Statistics that tracks deaths that occur on the job. Their findings indicated that while the rate of overdose death in the workplace was low—about 0.9 overdoses per million full-time employees—it had also increased significantly over the period studied, even as the overall rate of workplace fatality remained roughly constant.

The authors also indicate that the CFOI likely undercounts overdose deaths, as postmortem drug testing is only performed if some evidence of prior drug use is discovered.

Their overall finding is not surprising, given America's on-going drug crisis. Drug overdose is now the leading cause of non-medical death in the United States, and the leading cause of death for Americans under 50. More than 70,000 people were killed by drugs in 2017, so it is unsurprising that overdose has crept into the workplace.

Still, the new study's conclusions throw additional light on the impact of the overdose crisis on the U.S. economy. A 2017 survey from the National Safety Council found that more than 70 percent of employers report being impacted by the drug crisis, ranging from employee absenteeism attributable to drug use to the 10 percent who claimed to have witnessed an overdose on the job.

This creep of drugs into the workplace is reflected in lost productivity. A 2017 report from the President's Council of Economic Advisers estimated that the opioid crisis cost $504 billion, or 2.8 percent of GDP, in foregone output in 2015 alone.

At the same time, it has had a profound and devastating impact on America's labor market. Research by the late Alan Krueger, a Princeton economics professor, indicates that a third of men not in the labor force (i.e. neither employed nor looking for work) take opioid painkillers, and that where opioid prescriptions rose, labor force participation fell in tandem.

"It's a big number," Federal Reserve Chairman Jerome Powell said last year in reference to painkiller consumption. "It's having a terrible human toll on our communities and also it matters a lot for the labor force participation rate and economic activity in our country."

All of these effects—lost productivity, labor-force dropout, and overdose deaths both in and out of the workplace—tend to concentrate in certain communities more than others. The NIOSH study notes that nearly half of the overdose deaths it identified took place in three industries: transportation, construction, and healthcare/social assistance. By contrast, white-collar workplaces, like those in public administration or the professional fields, were unlikely to be affected. 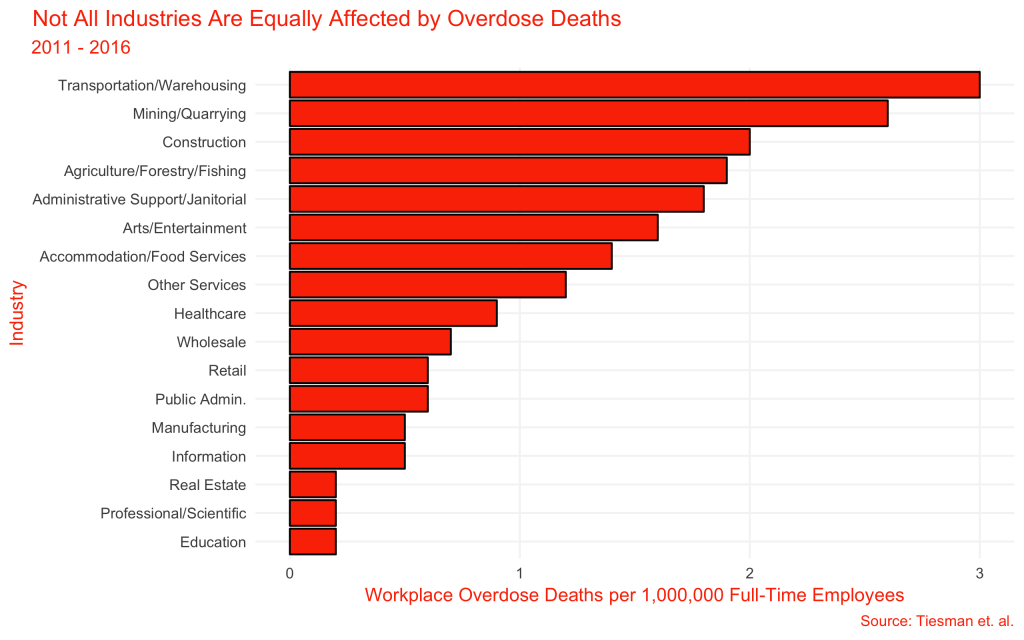 The authors point to research by a group of respected doctors and harm-reduction advocates, who point out that "the most profitable jobs in poor communities are those with elevated physical hazards that may increase risk of on-the-job injuries and chronic musculoskeletal conditions." In other words: the blue-collar jobs with the highest wages—fields like trucking, construction, and nursing—are also those which lead most directly to physical injury and, thereby, opioid dependency.

As such, economic distress and the drug crisis are, as Krueger puts it, "intertwined," with each driving the other. The new NIOSH study only adds further evidence to this connection, suggesting that among left-behind Americans, soaring overdose deaths and economic stagnation are two sides of the same coin.