Powell’s comments came during an appearance before the Senate Committee on Banking, Housing and Urban Affairs, CNBC reported.

Unemployment in the United States is at historic lows, but that statistic only tells part of the story. Unemployment rates count the percentage of people not employed who are currently looking for work, discounting people who are in school, retired, "discouraged," or who have otherwise dropped out of the labor force altogether. The percentage of the overall population actually participating in the labor force—the labor force participation rate (LFPR)—has been steadily declining since the early 2000s.

Powell cited research by Princeton economist Alan Krueger, who found 44 percent of working-age ("prime age") men not in the labor force reported taking a painkiller in the past day, with two thirds of those men taking a prescription. Labor force participation, Krueger's paper noted, "has fallen more in areas where relatively more opioid pain medication is prescribed, causing the problem of depressed labor force participation and the opioid crisis to become intertwined."

"It's a big number," Powell said of the rate of painkiller consumption among non-participant men. "It's having a terrible human toll on our communities and also it matters a lot for the labor force participation rate and economic activity in our country."

Powell's argument links together America's surging opioid crisis and the long-run decline in the LFPR. Indeed, self-reported opioid abuse rose in the late 1990s to hit its current levels in roughly 2003, according to an analysis of national survey data. This suggests that the period of LFPR decline has overlapped with a period of increased opioid abuse.

On the other hand, the secular trend in LFPR decline is arguably longer-running than the opioid crisis. The aggregate LFPR’s recent drop-off obscures how the male LFPR has declined for decades, offset by an increase in the female LFPR as women enter the workforce en masse for the first time. Importantly, this drop in male LFPR substantially precedes the current opioid epidemic. 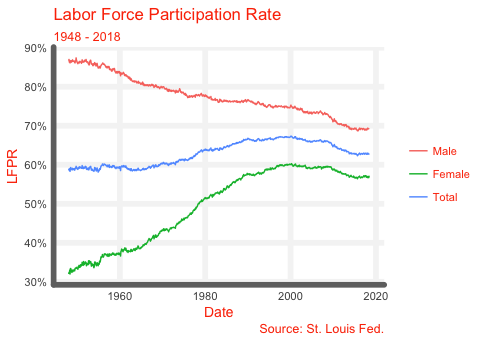 One factor which may explain the connection between opioid consumption and prime-age male labor force drop-out is the upsurge in self-reported disability. Analysis from Scott Winship, formerly a scholar at the Mercatus Center, notes that at least 58 percent of inactive prime-age men report being disabled; Krueger finds much the same, claiming about half of prime age men not in the labor force "may have a serious health condition that is a barrier to work."

All of this matters in part because of the scourge of opioid addiction—which claimed more than 40,000 lives in 2016 and may have taken more in 2017—but also because of the impact of labor force dropout on the economy. In a tight labor market, with what some analysts are labeling a "labor shortage," the persistently decline in the male labor force participation rate keeps employers desperate for employees.

If Powell's analysis is correct, then addressing opioid addiction will help bring more people back into the labor market. Of course, such interventions won't help if large portions of the population really are dropped out of the labor force for disability purposes. That said, it is not clear what role substantive disability, versus a strong social safety net and vanishing jobs in the historically high-risk manufacturing sector, plays in encouraging people to opt out of work and on to the dole.