A Women's March organizer who came under fire this week for attending a sermon by rabid anti-Semite Louis Farrakhan responded to criticism by tweeting a defense from a rapper who shared Farrakhan's bigoted views.

Tamika Mallory was called out by CNN's Jake Tapper after she attended Farrakhan's annual Saviours' Day address, during which the Nation of Islam leader attacked "that Satanic Jew," called Jews "the mother and father of apartheid," and declared that "when you want something in this world, the Jew holds the door."

One of Mallory's defenders was Bronx rapper and political activist Mysonne, who denied that Mallory was an anti-Semite. In appreciation, Mallory shared his tweet on Twitter and Instagram.

Love my brother for life! https://t.co/3gb2g9FmVj

Without my brothers and sisters, I am nothing! @mysonnenygeneral ✊🏾🖤

But in his defense of Mallory, Mysonne then made a series of comments agreeing with Farrakhan's view that Jews were uniquely to blame for the plight of black people.

"…farakhan[sic] has a view of Jews based on the pain and harm that he can prove they've inflicted on blacks for hundreds of years!" he tweeted to one user who compared him to David Duke, another anti-Semite. 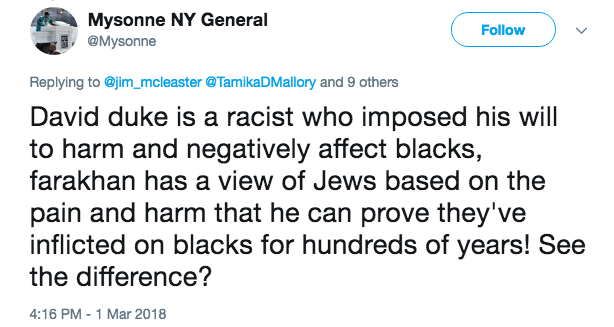 "To disagree with farakhan[sic] is understandable," he tweeted to another user, "but to act as if the violence, pain, control and destruction that people he has evidence that are in fact Jewish have imposed on Blacks is not Realistic." 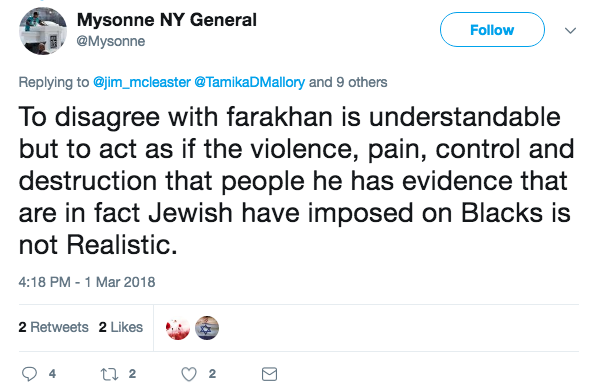 When called out for his views, Mysonne claimed he was not an anti-Semite because some of his best friends were Jewish.

Turns out @Mysonne is an anti-Semite who thinks Jews have oppressed blacks for "hundreds of years." pic.twitter.com/mCYdZH0ULL

I know beautiful Jews, some of my best friends are Jews. I don't have anything against Jews. That's why I told you , your argument is with the wrong people.