Review: 'Deaths of Despair and the Future of Capitalism' by Anne Case and Angus Deaton

Every year since the turn of the millennium, the number of Americans dying by suicide has risen, with nearly 50,000 deaths in 2018 alone.

That steady increase began after almost a decade and a half of decline and has proceeded at such a pace that 2018's per capita suicide rate is the highest since the start of World War II. Suicide is now among the 10 leading causes of death in the United States, the second-most common cause for Americans between the ages of 10 and 24, and the third-most for those between 25 and 44.

These figures are a tragedy. But they are also a mystery. Experts have been unable to pick apart a statistical story that grows stranger the closer you look. What, they have been asking for years, is behind this unrelenting increase?

"We don't have a good answer," Dr. Jonathan Singer, president of the American Association of Suicidology (AAS), said. "That's the most accurate answer."

Other experts are equally perplexed—as one put it, "I have my guesses, other people have their guesses," but guesswork remains guesswork. Suicide has risen through booms and busts, across age groups, and simultaneously with Americans' increasing self-reported happiness. Explanations proffered by popular commentators and politicians raise more questions than they answer.

Of the crises of self-inflicted death that have struck Americans in recent years—including drugs and alcohol—the suicide spike is by far the hardest to explain. At the same time, it has received the least attention: While the federal government earmarks millions of dollars for alcohol abuse and billions for drugs, suicide receives little in the way of funding. A lack of research, as well as limited resources for interventions, promise to continue to make this case deadlier every year. 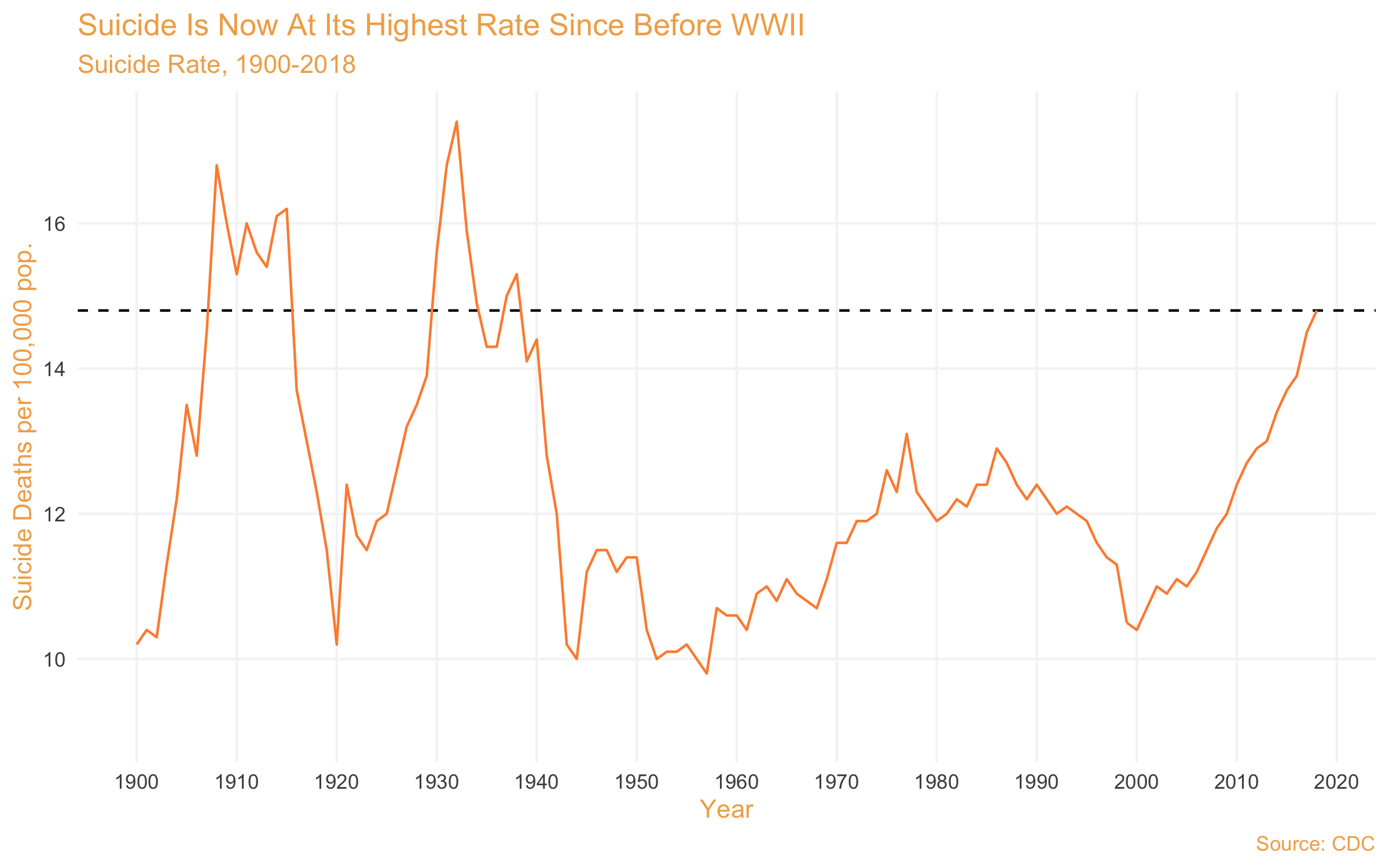 Data from half a century ago are likely to be imprecise. But since the 1960s or so, suicide rates have followed a steadier trend, rising slowly through the '70s, curbing in the '80s, and then falling through the '90s until, all of a sudden, they take off in 2000. The subsequent rapid ascent looks unlike anything recorded in the data for the past 50 years.

"Suicide rates are cyclical," Dr. Bart Andrews, an AAS board member, told the Washington Free Beacon. "If you look at the U.S. rates over the history that we've been tracking it, we tend to see these 20- or 30-year cycles of up and down suicide trends."

Andrews said that he's not yet convinced that the sudden spike in 2000 is a departure from this cyclicality—its magnitude may just represent better tracking. But it is hard to see the past 20 years following the same dynamics as the '70s and '80s when data collection was at least closer in quality to today.

Demographically, the suicide spike concentrates among non-Hispanic whites and Native Americans, reflecting those groups' historically higher suicide rates compared with others. In the past 20 years, men were three to four times more likely to commit suicide than women, although that is also true historically and cross-culturally.

Although it concentrates by race and sex in predictable groups, one of the curious features of the suicide spike is that all age groups are experiencing it. Young people, in particular, are reaching record highs, but suicide is up for every age group between 15 and 85. 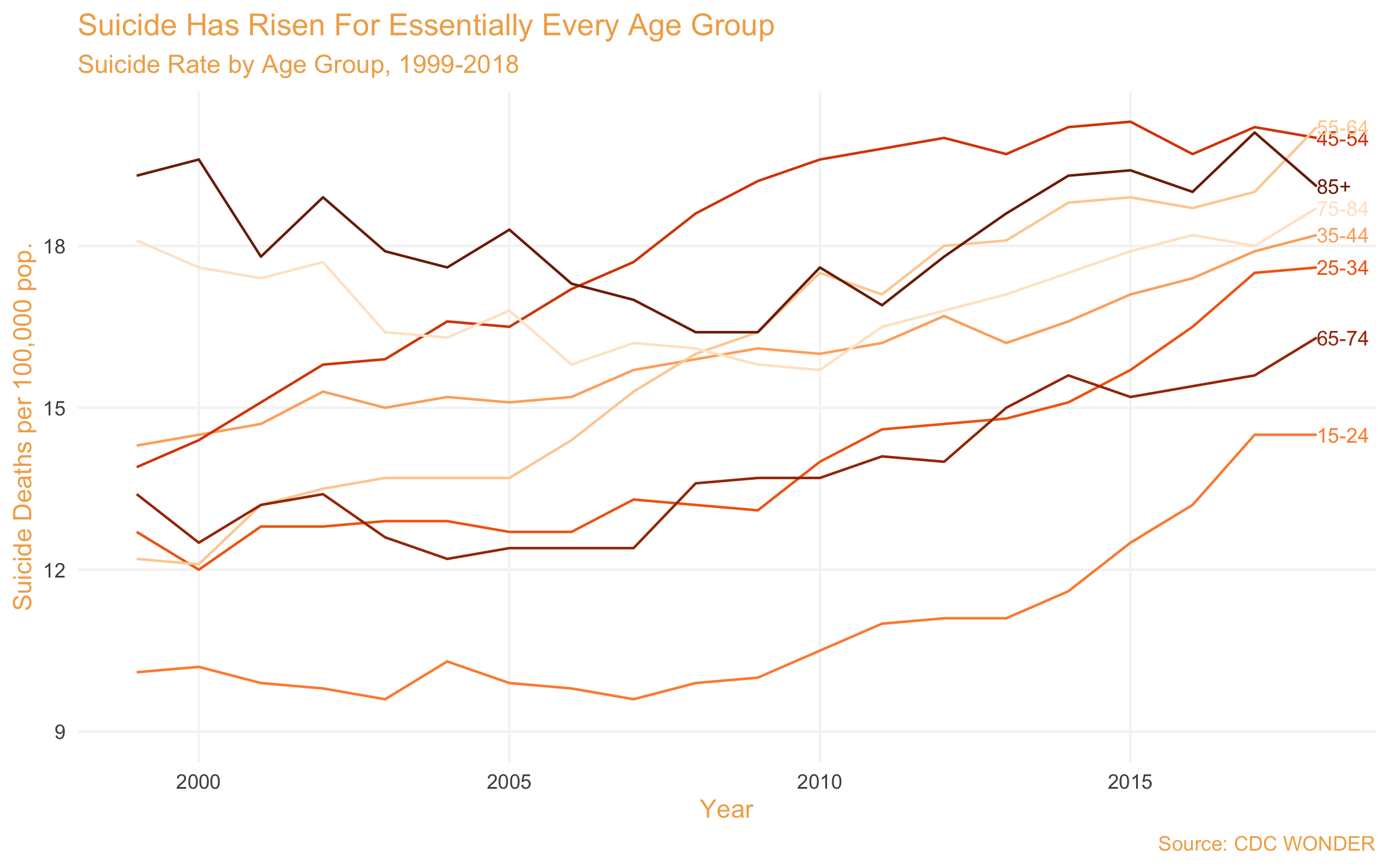 What could explain this all-ages suicide wave? The answers available, as it turns out, only lead to more questions.

The Story Gets Stranger

"Anyone who tells you that they know exactly why the rates are going up or going down is lying to you," Andrews said. "We truly don't understand this really well."

"I wish I could give you a better soundbite with this," Singer said. "It's just so complicated, and we don't know."

A two-decade suicide spike has given commentators and scientists time to formulate hypotheses. But the holes in their arguments actually make the crisis appear even more mysterious.

For example, Singer explained, for "a long time," suicidologists believed that youth suicide corresponded with other risky teenage behaviors—drinking, having sex, doing drugs, etc. But as such behaviors have become less common, teen suicide has only risen—in other words, less risk now means more suicide, not less.

Andrews suggested that the spike has something to do with both cultural and economic changes. But the latter explanation highlights something equally weird: The suicide rate seems largely unrelated to the business cycle, growing just as quickly before, during, and after the Great Recession.

Other curiosities emerge when one more closely examines less-scholarly explanations. Start with one often invoked by those on the left: the 400 million firearms in American homes. Guns were at the center of a feature on the crisis in Rolling Stone last May, while in October, Rep. Carolyn Maloney (D., N.Y.) released a report claiming to find that "gun access is driving [the] suicide epidemic."

Maloney, Rolling Stone, and others correctly identify that firearms are the leading cause of suicide death, but that has been true for decades. Surprisingly, firearm deaths do not account for the major part of the increase in suicides since 1999. 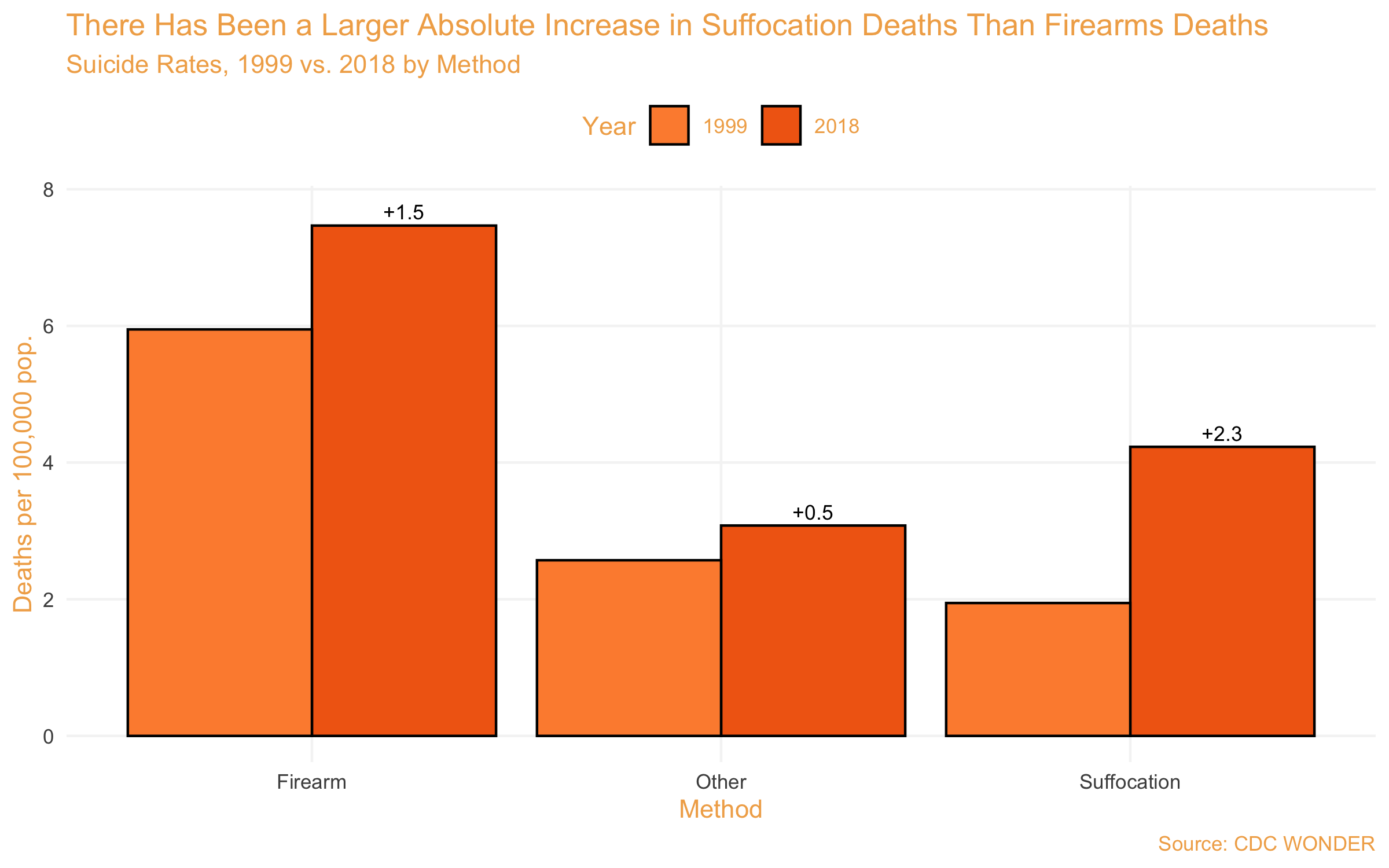 Data show that about 35 percent of "added" suicides since 1999 are attributable to firearms, compared with 53 percent added suffocation deaths and 12 percent "other." In other words, firearms can explain, at most, about a third of the increase.

That's not that surprising, given that the share of Americans with a gun in their homes has fallen since the 1990s. But it does suggest something else weird—why have suicides by suffocation become so much more prevalent over the past two decades?

Another popular culprit is social media and smartphones. Everyone from TV host Tucker Carlson to psychologists Jean Twenge and Jonathan Haidt has pointed their fingers at technology to explain teen suicide in particular. Twenge has provided some empirical evidence for the case, linking extended screen use to increased suicide risk.

But the screens-suicide link is not so cut and dry. One large longitudinal analysis found that there was no relationship between screen use and depression, except where depression predicted screen use among teen girls—not the other way around. Another confirmed Twenge's finding but also found that increased screen time explained just 0.4 percent of the variation in teens' wellbeing.

Faced with this mystery, some have simply labeled the suicide spike as a product of general social malaise. These arguments often allude to "deaths of despair," the sociological term coined by economists Anne Case and Angus Deaton to refer to rising suicide, drug, and alcohol deaths among middle-aged, white Americans, but now often used to refer to self-inflicted deaths more broadly.

But Americans are actually less despairing than ever. Gallup recently found a 40-year high in their satisfaction with life, while the share telling the General Social Survey that they are "not too happy" has barely budged. There is much talk of a "loneliness epidemic," but as Congress's Joint Economic Committee found in a 2018 report, there are little data to indicate that Americans are lonelier today than they were decades ago. And data from federal surveys show that at least among older Americans, self-reported rates of suicidal ideation appear to be basically flat. 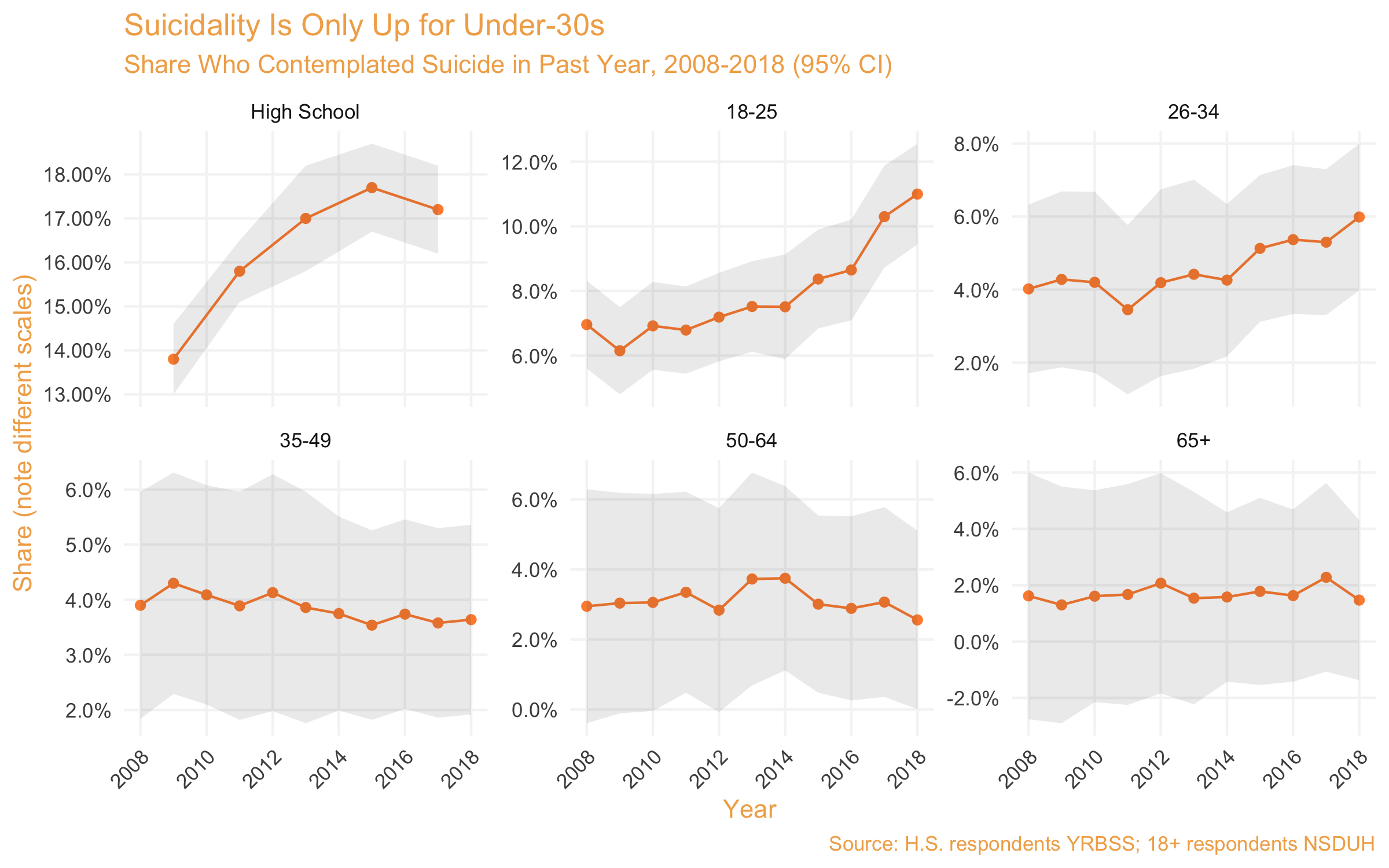 Singer cautioned that this last trend may be because research suggests that "the people who die by suicide are not a pure subset of those who have suicidal thoughts, or even those who have attempts." But it at least adds another layer to our mystery.

All of these would-be explanations show us more we cannot explain. The suicide rise goes up as risky behavior goes down; it does not track economic rise-and-fall; it's driven not by firearms but by suffocation; it seems disconnected from technology, and it's growing even as Americans seem to be happier. Why, then, do we not know what is going on?

Is Suicide a Priority?

Amidst a nationwide panic about Ebola in 2014, Congress appropriated $5.4 billion to fight the deadly African disease. In total, 11 Americans were infected, of whom two died.

That same year, 42,826 people died from suicide. In FY 2015, the National Institutes of Health allocated about $70 million to "suicide" and "suicide prevention" research. Today, that number is about $150 million. By comparison, alcohol abuse—which killed 75 percent of the people suicide did in 2018—gets nearly 3.5 times as much funding.

"We need to have funding that is proportional to the crisis we're facing," Andrews said. "We spend a pittance on suicide prevention, which tells me that culturally we still don't value these deaths."

To the extent that we know what works, suicide prevention efforts face legislative and funding limitations. Singer pointed to research on "comprehensive community-based suicide prevention," including support for community "gatekeepers," which was shown to reduce teen suicide rates, in particular in rural communities. But rates crept back up when the program was defunded. The American Foundation for Suicide Prevention (AFSP) has called for expanded suicide assessment and intervention training for medical professionals, which was required by just nine states as of 2018.

"One of the reasons that we don't understand it really well is that understanding, the research, the amount of time and effort we put into understanding changes in the suicide rate, is abysmal," he said.

Dr. Jill Harkavy-Friedman, vice president of research for the AFSP, made a similar call for more funding, both for suicide research and suicide prevention.

"Until we scale up intervention efforts at the community, state, and national levels, we will likely continue to see an increase in suicides in the United States," she said. "As a nation, we need to significantly increase our investment in the science, education, and advocacy, in order to expand effective suicide prevention efforts. The lives of millions of Americans depend on it."

Review: 'Deaths of Despair and the Future of Capitalism' by Anne Case and Angus Deaton