An intern at an undocumented immigrant-focused group funded by liberal billionaire George Soros, and which is an approved group of the left's biggest dark money donor network cofounded by Soros, was behind the ambush confrontation of Sen. Mitch McConnell and his wife, Transportation Secretary Elaine Chao, as they were leaving an event at Georgetown University on Tuesday evening.

The incident was filmed and uploaded to Twitter by a user named Roberto.

We confronted @SenateMajLdr and @SecElaineChao with @ProPublica audio of children separated from their families at the border while leaving a @Georgetown event. We must #AbolishICE & #AbolishCBP! #FreedomforImmigrants pic.twitter.com/ljv70F3F0L

Roberto, a self-described "rising Senior" at Georgetown University, said he had just come back from his internship at United We Dream and claimed that "a friend" had texted him that McConnell and Chao were at an event on campus.

United We Dream boasted of Roberto's confrontation on their Twitter account, writing, "‘Leave my husband alone?' Tell that to the families who were ripped apart by ICE & the undocumented youth who won't see relief because of him. Shout out to UWD intern Roberto & youth holding @SenateMajLdr accountable! #AbolishICE #AbolishCBP".

Twenty minutes after the tweet, the group also bragged about Marco Rubio hecklers in Florida. "Shout out to our UWD Florida organizers for keeping @marcorubio accountable to his horrible endorsement of family detention. We need #FreedomForImmigrants, not more cages," they wrote. The group did not respond to a request for comment by press time.

United We Dream is the "largest immigrant youth led organization in the nation" that is headed by Washington, D.C.-based activists. The organization's website says they have over 100 affiliate groups across 28 states.

The group sends out "Action Alert" texts to individuals signed up for notifications in their area to quickly mobilize for rapid response purposes. 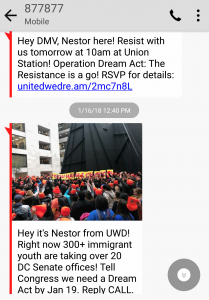 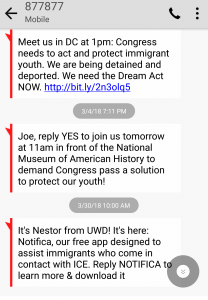 United We Dream was behind demonstrations such as the "sanctuary campus" anti-Trump protests that were initially billed as being organized by students on the grassroots level. The protests took place at more than 80 colleges, where students signed petitions and walked out of classes to "support undocumented classmates."

Cristina Jimenez, the cofounder and managing director of the United We Dream Network, herself attended high school and college as an undocumented immigrant.

United We Dream is additionally funded by the Open Society Foundations, according to its annual reports.

Soros is a cofounder of the Democracy Alliance, the left's largest dark money donor network, in which each member vows to direct hundreds of thousands in funds to groups approved by the organization. United We Dream is one such group supported by the alliance.

Shortly after the 2016 elections, the Solidaire Network, the Threshold Foundation, and the Women's Donor Network, all San Francisco-based progressive groups, mobilized to form the "Emergent Fund" to resist "immediate threats" to "immigrants, women, Muslim and Arab-American communities, black people, LGBTQ communities, and all people of color."

Charlene Sinclair, the director of reinvestment at the Center for Community Change, sits on the Emergent Fund's advisory council alongside Jimenez, the managing director of United We Dream Network.

Like United We Dream, the Emergent Fund is an approved organization of the Democracy Alliance.

Prominent Democratic politicians are also linked to the alliance and have attended gatherings to map out the next steps of the "resistance."

Rep. Nancy Pelosi (D., Calif.) headlined a dinner at the group's secretive investment conference last fall in Carlsbad, Calif., and was joined at the retreat by Rep. Ben Ray Lujan (D, Minn.), who chairs the Democratic Congressional Campaign Committee, documents obtained by the Free Beacon at the gathering show.

Maxine Waters, who recently urged for "push back" against Trump officials in public, was also spotted at the resort but did not appear in the group's agenda.

WATCH: Soros Prosecutor Plays Dumb When Asked Why Attorneys Are Fleeing His Office