Justice Antonin Scalia argued against the recent majority opinions on Obamacare and same-sex marriage during a speech at Rhodes College on Tuesday evening, casting his fellow justices as "terribly unrepresentative of our country."

The Commercial Appeal of Memphis, Tennessee reported that Scalia criticized the idea that the U.S. Constitution is a "living document" that changes with the times and can be altered without official amendments.

"Don’t mess with the Constitution," Scalia said. "The people who wrote it were brilliant."

"Do you really want your judges to rewrite the Constitution?" Scalia added. He described the current Supreme Court justices as a mere group of lawyers "terribly unrepresentative of our country."

Scalia labeled the recent cases in favor of Obamacare and gay marriage as the  "furthest imaginable extension of the Supreme Court doing whatever it wants."

"I worry about a court that’s headed in that direction," Scalia told to a crowd of hundreds of people, including many students who lined up as early as three hours before his scheduled remarks.

The justice criticized individuals who support keeping the Constitution a fluid document that can change as time evolves, explaining that said arguments are usually driven by the idea of adding freedoms to the document.

"I don’t know why you think it’s always good unless you’re an anarchist," Scalia said. "I thought the trick was to balance freedom with order." 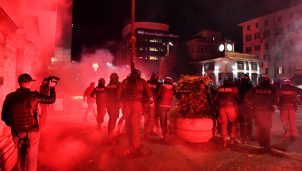