Report: Medicaid Expansion in Wisconsin to Cost More Than $1 Billion Per Year

Medicaid expansion in Wisconsin will cost taxpayers $600 million every year and drive up prices in the private sector as well. A family of four with private insurance, for example, can expect to see an increase in cost of as much as $700 per year.

That's according to a new study produced by the Wisconsin Institute for Law & Liberty (WILL) and the Center for Research on the Wisconsin Economy (CROWE) at the University of Wisconsin-Madison.

The total public and private cost of expanding Medicaid in the state will be more than $1 billion annually, according to the study.

"These costs are staggering and represent a misguided policy choice that would burden hard-working Wisconsin families already struggling with the cost of health care," WILL Research Director Will Flanders said in a statement. "The public deserves an honest debate about the true costs and trade-offs of any proposal that expands Medicaid in Wisconsin."

Gov. Tony Evers plans to include federal Medicaid expansion in his upcoming budget proposal to be announced on Feb. 28.

"The new research shows the expansion of government run and controlled health care isn’t good for Wisconsin," Speaker of the Wisconsin State Assembly Robin Vos said in a statement. "There’s a proven cost to families who have private insurance coverage with health care costs increasing more in states that expanded Medicaid."

The Impact of Medicaid Expansion: Examining the cost to consumers and the net impact on Wisconsin, co-authored by Flanders and Noah Williams, Director of CROWE and Professor of Economics at the University of Wisconsin-Madison, reviews data from all 50 states and the District of Columbia. It compares private sector health insurance costs and emergency room visits in states that expanded Medicaid eligibility and in states that did not expand Medicaid.

The report found that expanding Medicaid will increase the cost of health care on individual Wisconsinites with private insurance by roughly $177 per year and up to $700 for a family of four.

Even if the stated savings were applied, as expansion proponents argue, WILL and CROWE note that Medicaid expansion will still cost Wisconsin $600 million per year.

"Supporters of Medicaid expansion often point to so-called free money from the federal government without truly understanding the costs to consumers," Voss added.

Emergency room visits would increase in Wisconsin by more than 52,000 visits per year, the report adds, also driving up the cost of private health care.

"The way to contain health care costs and expand access to health care is not to move more Wisconsinites from private health insurance to a government run health care program," CROWE Director Noah Williams said in a statement. "It is only through market forces, competition, price transparency, and increased variety through deregulation that health care costs will decrease and access will be widespread." 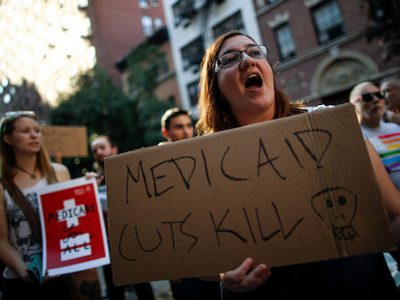