De Blasio admin touts first ever ad campaign in U.S. on bathroom use

New York City Mayor Bill de Blasio is billing taxpayers $265,000 for new advertisements that tell New Yorkers to use whichever bathroom they want, regardless of gender.

The "Look past pink and blue" campaign ads with transgender individuals are being plastered across the city, on the subway, in bus stops, phone booths, local television, and on social media. The ads will also appear in Spanish, Korean, Chinese, Russian, and Bengali newspapers.

"Use the restroom consistent with who you are," the ads read. "In NYC, it’s the law. No questions asked." The campaign is using the hashtag #BeYouNYC.

The New York Commission on Human Rights said it is the first-ever  government ad campaign in the United States on bathroom use. 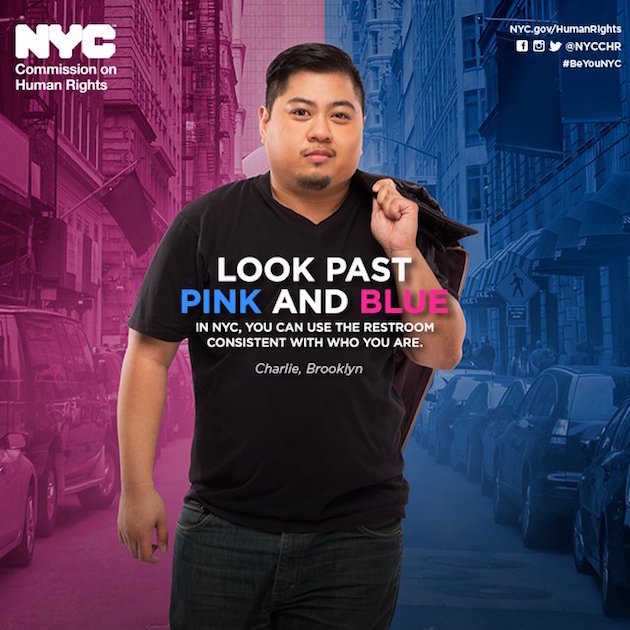 "No one deserves to be denied access to bathrooms or discriminated against for being who they are," de Blasio said. "Every New Yorker has the legal right to use the bathroom consistent with their gender identity, no questions asked—and these powerful ads affirm this right."

First lady Chirlane McCray, who de Blasio named the Honorary Chair of the Commission on Gender Equity, said the law allows New Yorkers to use the bathroom "where they feel comfortable and safe."

A spokesperson for the Commission on Human Rights told the Washington Free Beacon that the ad campaign is costing approximately $265,000.

The campaign was timed for "LGBTQ Pride Month." The ads reinforce the new policy of the de Blasio administration that defines gender as male, female, or "something else entirely."

New Yorkers can now face six-figure fines if they refuse to call a person by their preferred pronoun. The administration released a list of 31 approved genders, which includes "femme queen," "butch," "gender gifted," and "femme person of transgender experience."

The ads encourage individuals to call the government and report on their fellow New Yorkers if they "face discrimination based on [their] gender identity and expression."

The city said it used "audience research with transgender and cisgender New Yorkers and input from transgender community and legal advocates" to create the ads.