Marriage in America Is a Luxury

Analysis: Survey data capture major disparities in who gets to marry

Marriage, once a staple of American life, is now increasingly a luxury, according to a new report.

About 48 percent of the adult population is married, while about 11 percent report cohabiting and 7 percent are "in a relationship," according to the American Family Survey (AFS), in line with previous findings. The remainder, 34 percent, report "no relationship" at the time of their interview.

Each year researchers from Utah's Deseret News and Brigham Young University ask more than 3,000 Americans about their family lives, their views of family issues in the United States, and what concerns they have about the future of their and other families.

One of the benefits of the AFS, which began in 2015, is that, unlike many major surveys, it asks not only about marital status, but also about whether or not a respondent is cohabiting or dating. It captures the full range of what most people think about as being in a "relationship." What the survey reveals is that, in spite of a fixation on dating in popular media, a surprisingly small proportion of the population—18 percent—is paired but unmarried. Even among 18- to 29 year-olds, just 30 percent are "dating." 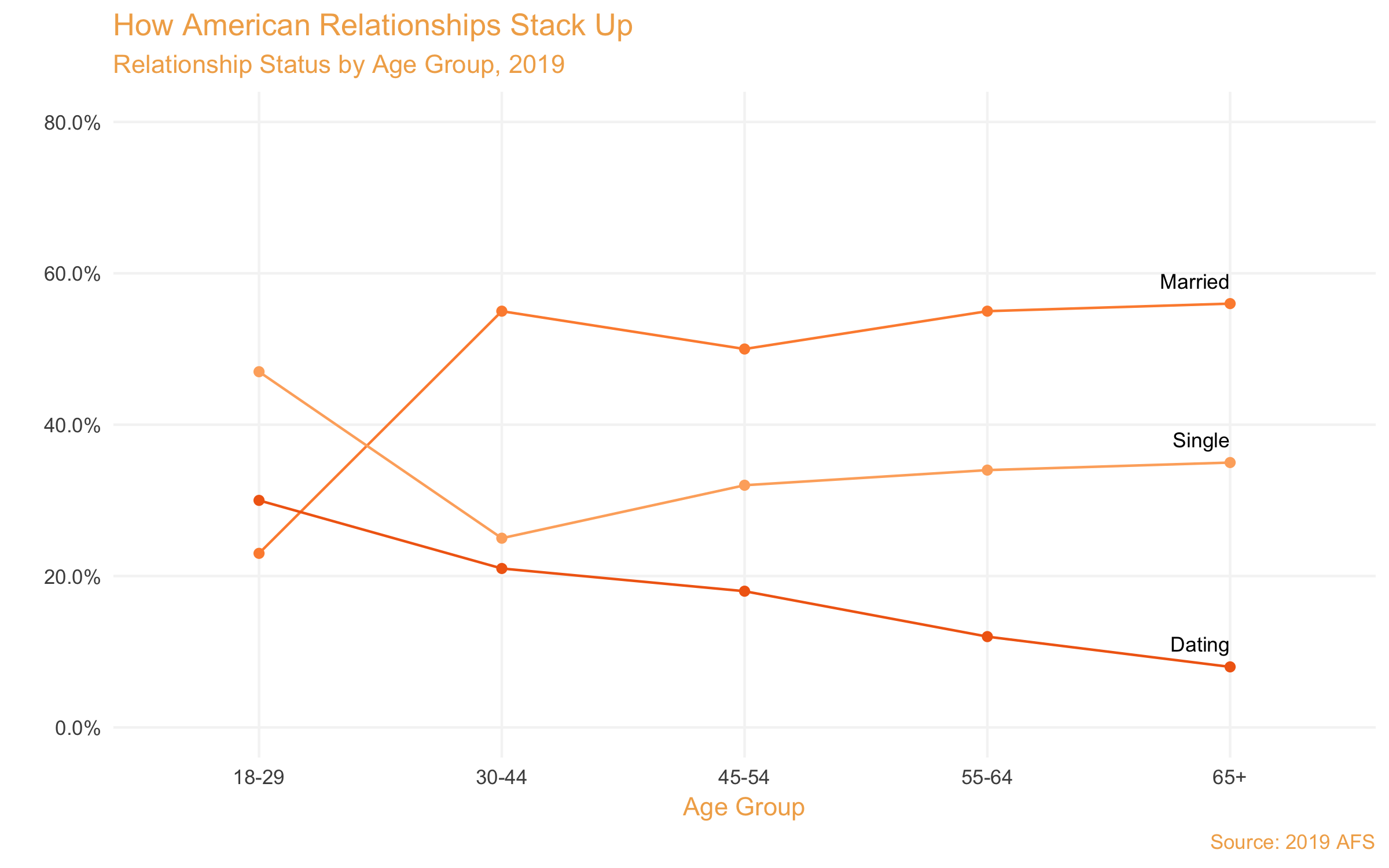 Surprisingly, 18- to 29-year-olds are most likely to self-identify as not being in any type of relationship. This finding goes hand-in-hand with the "sex drop," the steady increase in past-year celibacy among American women and, in particular, men in their 20s. While Americans have grown increasingly permissive toward moral choices such as premarital sex, actual steady, unpaired monogamy remains far less common—and therefore less of a route to sex — than marriage. For most people, the choices are still marriage or singlehood.

The AFS reflects this reality with its finding that majorities or near-majorities still think marriage is important: 60 percent say marriage makes families better off financially; 54 percent say it is needed to create strong families; 50 percent say, "when more people are married, society is better off." Only 18 percent call marriage "old-fashioned and out-of-date," while 15 percent see it as "more of a burden than a benefit."

While lots of Americans say they like marriage, far fewer are married today than they were 60 years ago. The picture that the AFS paints is a striking one: In general, marriage in 2019 is far more common among high-status individuals than low-status ones. 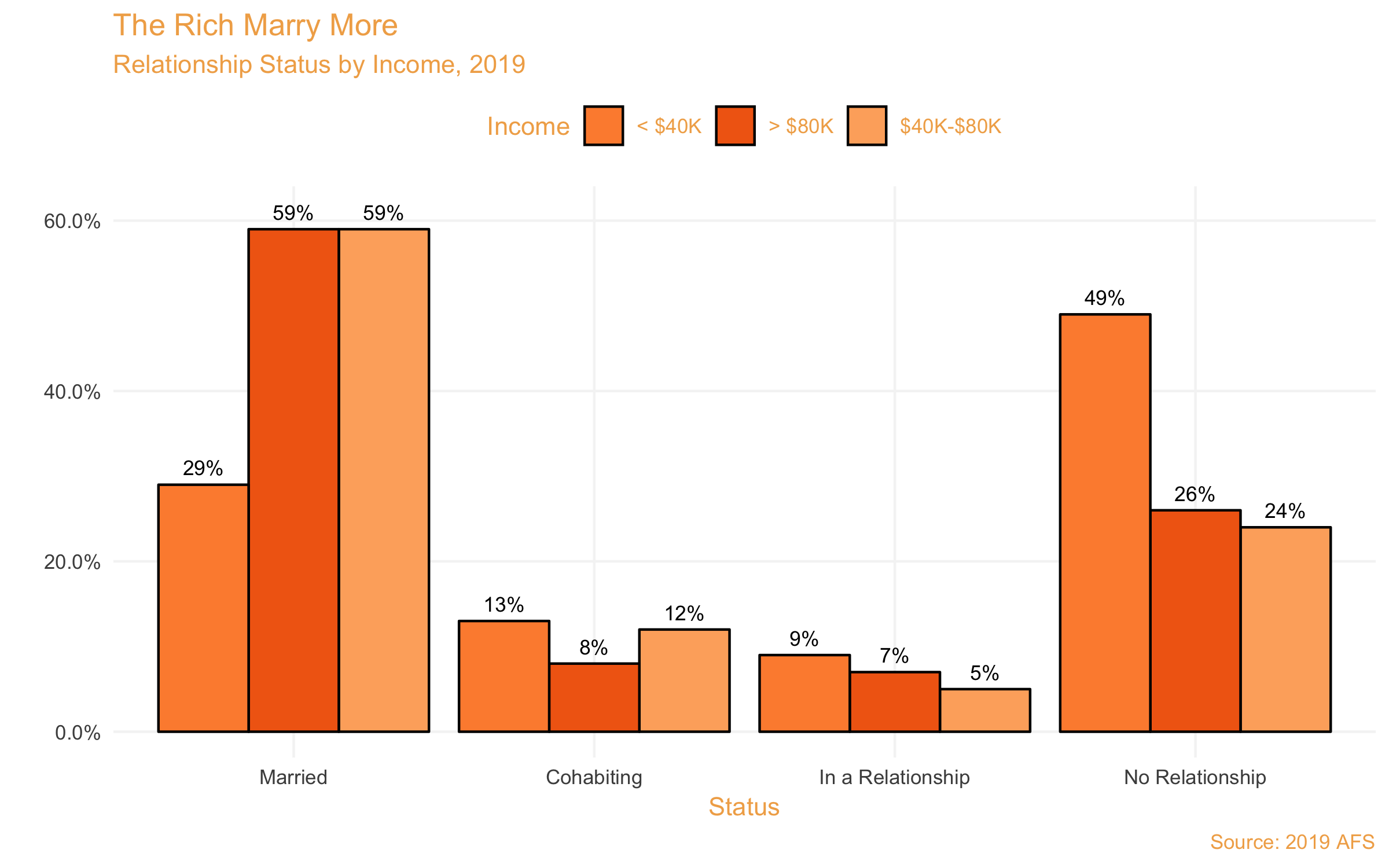 Disentangling these measures is hard. Still, the cumulative effect is remarkable, which is why marriage rates are attracting scrutiny from social scientists and demographers.

Those looking to explain the gap have explored everything from incarceration rates to the tax code to find an answer. Recent research on the dearth of "marriageable men" points to factors as diverse as declining labor force outlook for low-status men, mass incarceration, and even women's entry into the university. Demographer Lyman Stone noted in congressional testimony on Tuesday that much of the tax structure is biased against marriages—a dynamic he said is partially responsible for America's plummeting fertility rate.

This may seem like a paradox—if many marriages are getting stronger, how can marriage as a whole be getting weaker? But if marriage is growing more elite, than the quality of the average marriage will improve, even as the availability of marriage, and therefore the quality of the institution, declines.

The link between family-making and luxury does not stop in marriage statistics. The AFS surveyed respondents about their experiences with paid leave, as Congress weighs multiple proposals to expand access. The results are yet another instance of stratification in family life. 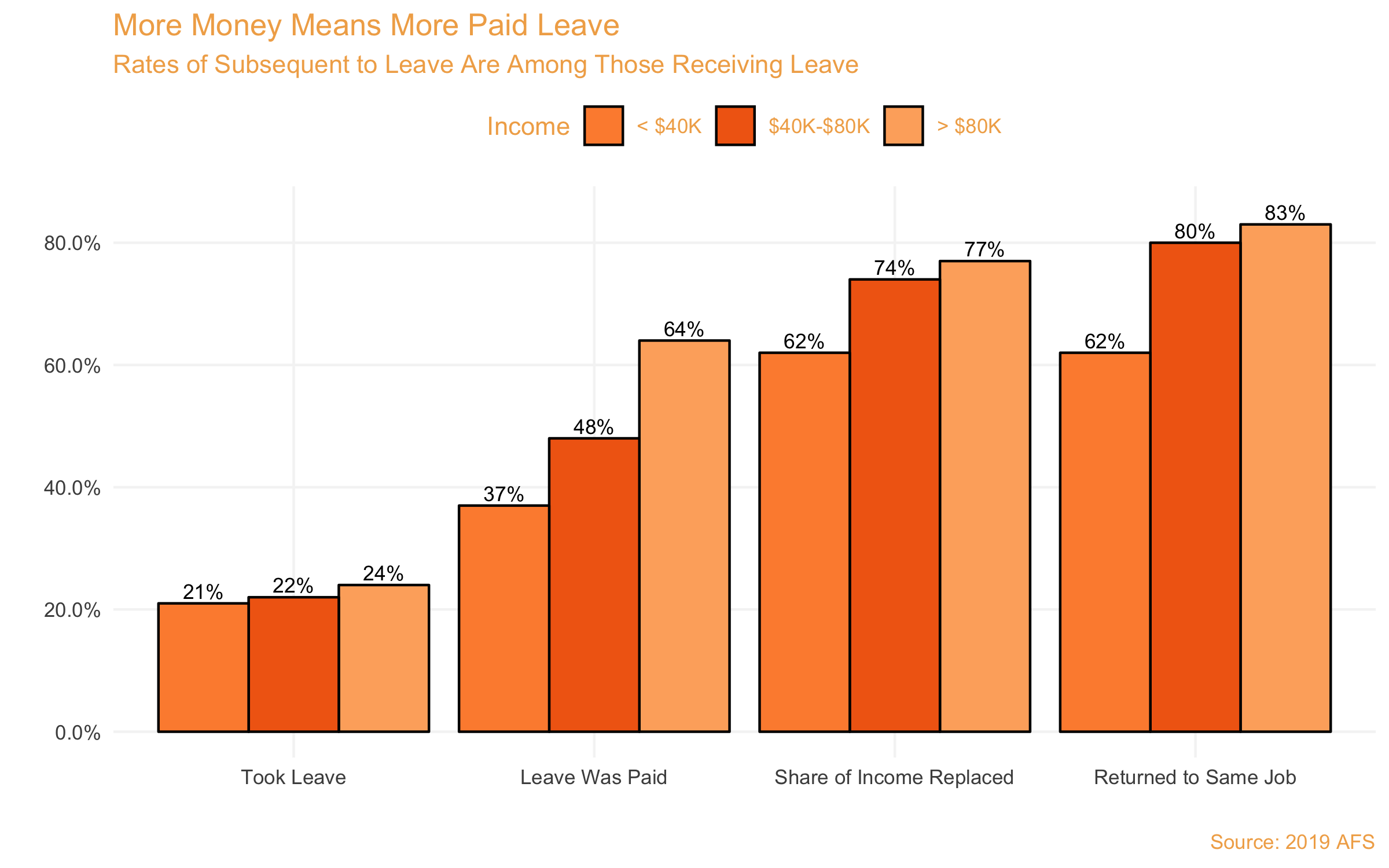 Among the three income groups the AFS reported on, roughly equal shares reported having taken any of their federally-guaranteed 12 weeks of unpaid family leave. But among those who did take leave, making more money increased the likelihood of being paid while on leave. The percentage of income covered by paid leave increased for higher earners. Those with paid leave were more likely to return to the same job and company after it expired. Paid family leave in general is linked to lower female labor force drop out post-pregnancy, the major driver of the gender wage gap.

What this finding illustrates is that family life, along with marriage, is becoming a luxury good. Paid family leave smooths the transition to childrearing for high-earners, but not for low-earners.

"The fact that Americans of all income categories take leave should not obscure the ways socio-economic status matters for the types of leave offered and for Americans’ experiences during and after their leaves," AFS said.

On Friday, a group of scholars met at the American Enterprise Institute to discuss the details of the survey results. University of Wisconsin sociologist Marcy Carlson argued that the persistence of marriage among elites proves that, in spite of cultural messaging to the contrary, people still want marriage.

"I think the fact that marriage is much more common and much more stable among those with a higher education and a higher income shows that marriage is a choice that people want," Carlson said. "Because exactly the people that can afford not to get married and do family in other ways are the ones choosing this institution."

The obverse is also true. Marriage being more common and more stable among the better-off means that those who want it, but can't afford it, are left out in the proverbial cold.