The Mystery of the Missing Husbands

A startling number of young women are unable to find a spouse, and new research from a group of economists suggests their would-be partners are just not up to snuff.

The new paper—the work of economists from Cornell, Brigham Young University, and Southern Utah University—explores why today's young women are marrying later or not at all, linking the trend to a series of changes in American society: mass incarceration, economic inequality, and women's arrival on the college campus.

Today's young adults are opting to both marry later and less often than their parents and grandparents did. The share of women aged 25 to 45 who are married has declined more or less continuously since about 1970, dropping from more than 80 percent to about 50 percent in half a century. 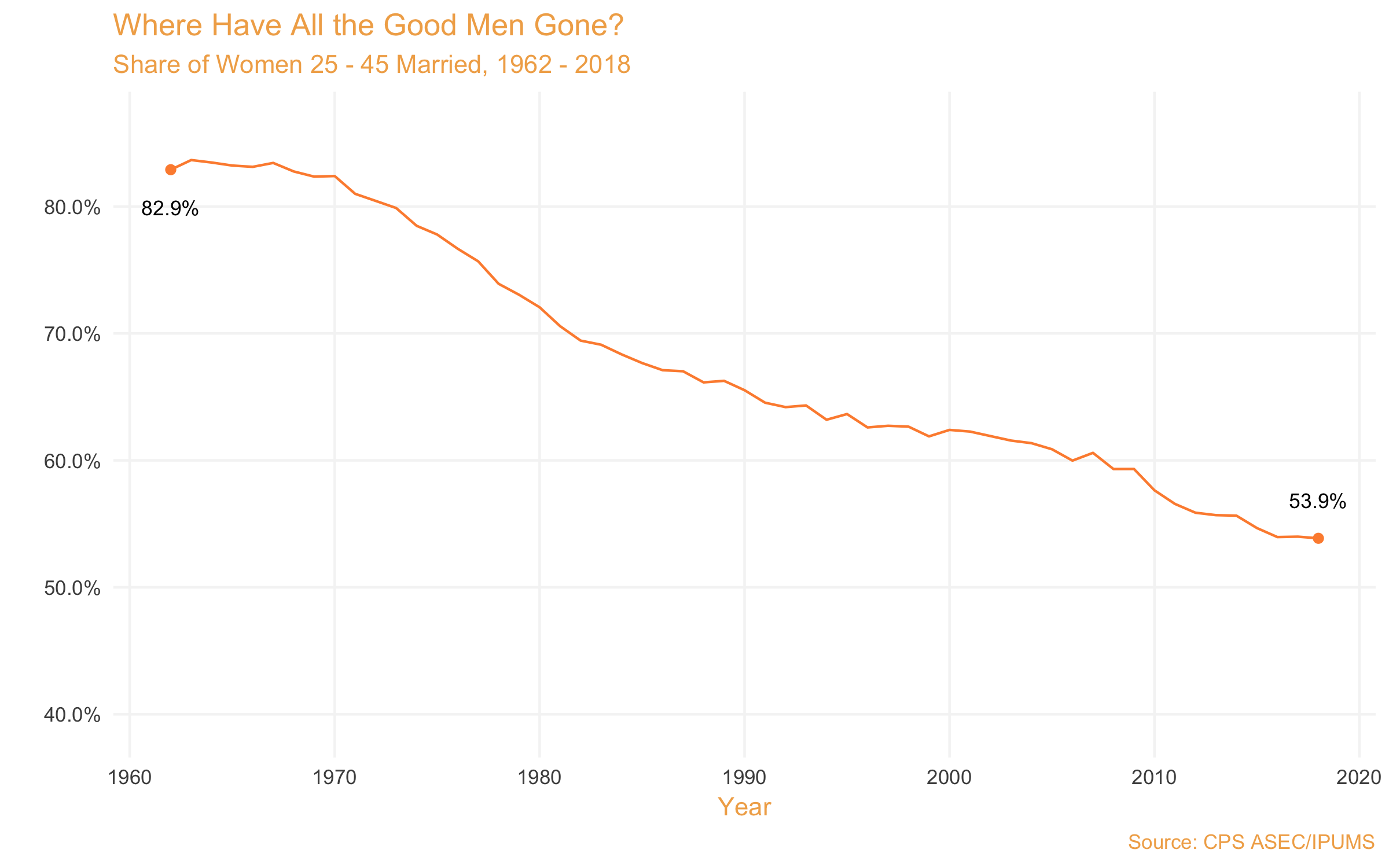 The authors collected data from the American Community Survey, an annual survey conducted by the Census Bureau that collects demographic information including marital status. They divided up respondents by sex and marital status, as well as by race, income, and educational attainment, and linked each unmarried woman in their sample to a group of demographically similar married women. They then used information on the husbands of the married women in each group to create a hypothetical "synthetic husband" for the associated unmarried woman. The researchers compared the "synthetic husbands" to the actual pool of unmarried men, and found enormous disparities between the actual bachelor class and the hypothetical spouses likeliest to match with America's unmarried women.

Researchers approached the question of marriage from a market perspective in which "buyers" and "sellers" try to pair off to reach mutually satisfactory arrangements. In this model, people usually pair with others who are mostly like them—what is called "assortative mating."

On the one hand, there is a certain "floor" to a man's marriageability. The supply of what sociologist William Julius Wilson called "marriageable males" is constrained by men's employment, earning power, and educational attainment. Men's labor force participation has declined precipitously, a trend which has particularly reduced the "marriageable male" population in areas affected by deindustrialization. The number of such males has stagnated, leading to a lack of suitable partners for some women, especially on the low end of the socioeconomic-status spectrum.

This problem is particularly significant for black women, in no small part because of the large share of the black male population currently incarcerated. Even black women with a college degree, or who made in excess of $100,000 per year, were significantly less likely than their white counterparts to be "paired"—a finding that further confirms Wilson's original claim, according to the authors.

Women with a college degree also struggle to find husbands in today's "assortative mating" system for the simple reason that they outnumber men with diplomas. In general, women prefer not to "marry down" educationally, e.g. pairing a college-educated woman with a high school-educated man. But since the mid-1990s, women have made up a larger share of the college-educated population than men—meaning that they either must "marry down" or remain single. 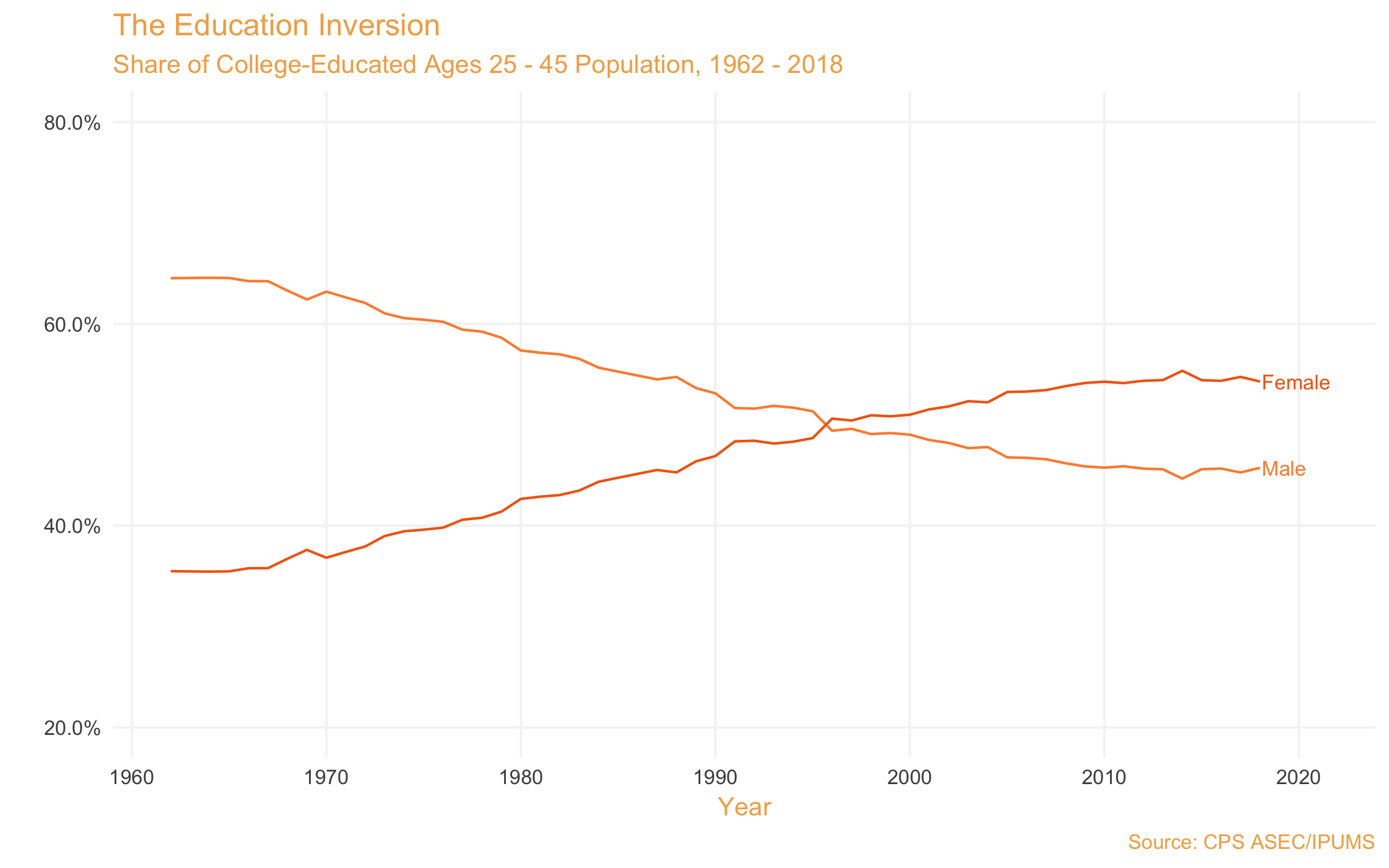 The rise of "underqualified" men and "overqualified" women is at least partially to blame for America's plummeting marriage rate. The question remains: what will women do? The paper concludes that college-educated women have an easier choice to make in today's marriage market than do women without college degrees.

Women already at the bottom end of the skills distribution have no option to "settle." Which is why, the paper argues, helping men rise up may be good for everyone in the marriage market.

"One implication is that promoting good jobs may ultimately be the best marriage promotion policy rather than marriage education courses that teach new relationship skills," the paper concludes. "Of course, other policy efforts aimed at securing women's economic independence (i.e., equal pay legislation) are also important in the case of single mothers who often face constraints on marital search behavior and have limited prospects for ‘marrying up.'"