A congressional candidate, who is endorsed by the same progressive group that backed Reps. Alexandria Ocasio-Cortez (D., N.Y.) and Ilhan Omar (D., Minn.) in 2018, recently called to disarm police officers.

"It’s time to disarm the police," Jamaal Bowman wrote on Twitter before retweeting one user's response that police in the United Kingdom "carry no guns" and thus have "killed no citizens."

Bowman, a Bronx middle school principal, is challenging incumbent Rep. Eliot Engel (D., N.Y.) in New York's 16th Congressional District. Just one-third of Justice Democrats-backed candidates won their primary in 2018, and Bowman is now the third candidate to challenge Engel, who was first elected in 1988, from the left.

If his call for police disarmament is any indicator, Bowman may soon join the majority of failed Justice Democrats-endorsed challengers. Bowman's proposal is "nonsensical," according to Manhattan Institute legal policy expert Rafael Mangual.

"The proposal itself is something that I don’t think is to be taken seriously," Mangual said. "This idea that we can disarm police, even in New York, which has now relatively low rates of gun crime, is really nonsensical."

In spite of the attention they receive in the media, police homicides are rare. Mangual pointed to recent research that found 99.22 percent of arrests did not involve the use of any force. Among cases where force was used, 98 percent resulted in "no or mild injury."

According to the Washington Post‘s database of police-use of fatal force, there have been 32 police shootings in New York City and the five boroughs since 2015. Just one of the individuals killed in that time—24-year-old David Felix— was unarmed. Another, 18-year-old Sergio Reyes, was carrying a fake pistol, which he had just used to rob a bodega and pointed at the officers who shot him.

Bowman is also likely underestimating the contrast between the United States and the United Kingdom in terms of crime rates. According to data from the Metropolitan Police Service, there were roughly 131 homicides in London in 2018, a rate of 1.6 per 100,000 residents. That figure was actually the highest in a decade, thanks to a spate of stabbings that made international news. 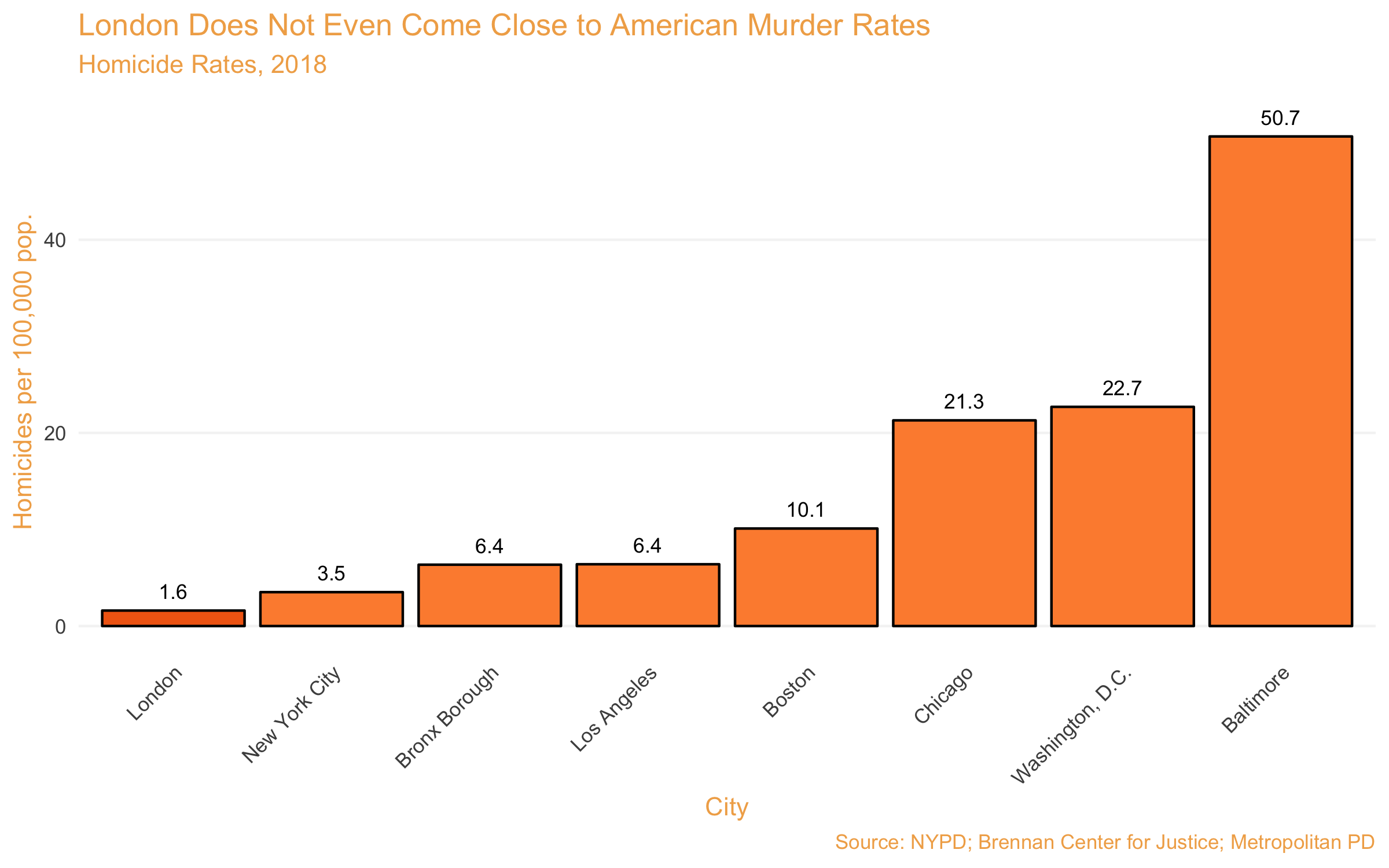 London does not even come close to the homicide rate of comparable major U.S. cities such as Los Angeles, Chicago, or Boston, despite a decades-long trend of declining crime in the United States. Even at the lowest rates in 30 years, the United States is simply more violent than other nations.

Though Engel did not respond to request for comment when asked if he supports Bowman’s call to disarm police, two of Bowman’s primary opponents offered differing opinions on the issue.

"As someone who envisions a society free of guns, I support disarming police," said Ghebreghiorgis, adding that arming police "needlessly escalates what should be non-confrontational interactions between community stakeholders."

But a third challenger with 25 years of police experience, Sammy Ravelo, disagreed, calling Bowman’s support for disarmament "outrageous and irresponsible."

"I believe that the recent call by my opponent to disarm the police is both outrageous and irresponsible," said Ravelo. "The suggestion of disarming our men and women in blue disqualifies Mr. Bowman from seeking to become an elected official."

"Disarming the Police will negatively impact poor communities and communities of color where violence is higher due to socio-economic reasons," Ravelo concluded.

Justice Democrats held several conversations with Ghebreghiorgis before deciding to endorse Bowman, according to the Intercept.

Engel celebrated a runaway victory against three primary opponents in 2018, receiving nearly 74 percent of the vote. Republicans have not run a candidate against Engel since 2012.

Here Are All 27 Democrats Who Voted Against Protecting SCOTUS Judges