America is facing a serious increase in hate crimes, according to multiple prominent figures; data from the FBI show that, while this is true, the full story is more complicated than it may seem.

In the wake of actor Jussie Smollett's arrest for the alleged perpetration of a fake hate crime, political and media figures—many of whom were quick to support Smollett's story—have sought to emphasize that commentators should not downplay the real rise of hate crimes in America.

"We must speak the truth: hate crimes are on the rise in America," 2020 contender Sen. Kamala Harris (D., Calif.) wrote in a statement released on Twitter. "Just last year, the FBI released statistics that revealed a 17 percent increase in the number of hate crimes in America."

"We don't know what happened to Jussie, but what we do know is that racism is alive and well in this country, homophobia is alive and well in this country. 2017 set a record for the number of hate crimes," claimed Vox‘s Liz Plank in a CNN appearance. "There has been an increase in hate crimes against the LGBT community, against Muslims, against black people."

But not everyone is so sure. Plank's co-panelist, Reason contributor Kmele Foster, pushed back on her claim, arguing that "even in FBI statistics, there's a great deal of ambiguity about what makes something a hate crime."

"There is not a lot of statistical evidence to support the notion that hate crimes are surging," added Foster's Reason colleague Robby Soave.

In absolute terms, even one hate crime is tragic and condemnable. But in relative terms, knowing how frequently hate crimes are committed, especially in the context of history, can help to create a more nuanced and thoughtful discussion about how society and policymakers should respond. So how common are hate crimes, anyway?

Harris's claim that hate crimes have increased "17 percent", which has previously been repeated by news outlets, comes from the Federal Bureau of Investigation's Uniform Crime Reporting Program (UCR), specifically its Hate Crime Statistics series. The UCR aggregates data from police departments from across the nation, and is routinely used as the source for annual crime statistics.

(A separate source of data on criminal offenses is the National Crime Victimization Survey, administered by the Bureau of Justice Statistics, which asks a statistically representative sample of Americans about their experiences of being criminally victimized. The most recent report on the topic from the NCVS indicated that hate crime rates fell between 2004 and 2015; however, summarized data were not available for years after 2015, limiting its usefulness for analyzing recent trends.)

The 17 percent figure cited by Harris and others is just the percent change in the number of hate crime incidents reported to the UCR in 2017 over 2016—7,175 in 2017 and 6,121 in 2016. But this figure is misleading for two reasons. First, such absolute numbers need to be population adjusted, to account for the year-on-year increase in the U.S. population.

Second, not all law enforcement agencies actually report hate crimes to the FBI—in 2017 for example, about 16,000 sent in figures, covering about 94 percent of the population. To accurately assess the frequency of hate crimes, then, we need to convert the absolute number of incidents into a rate, by dividing that figure by the covered population. 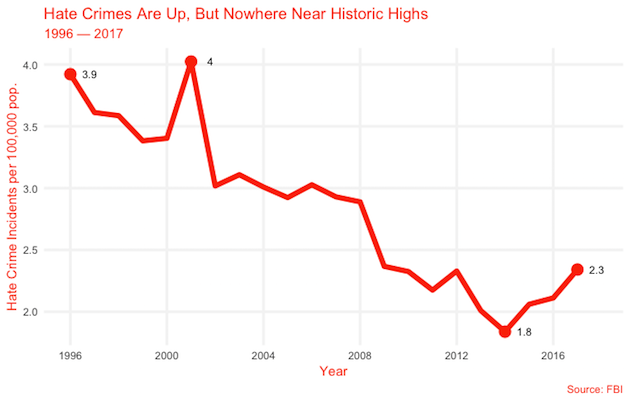 The plot above highlights a couple of important points. First, in available historical context, the hate crime rate is substantially lower than it used to be. (The spike in 2001 is attributable to an increase in anti-Islam and anti-Muslim hate crimes following 9/11.) Plank's claim that "2017 set a record for the number of hate crimes" is just false, both in absolute and population-adjusted terms.

The second important point, however, is that the hate crime rate rose notably between 2014 and 2017, up 27 percent from the historic low. Many left-leaning commentators have pointed to this as evidence that President Donald Trump, who emerged as a political force in 2015, has caused an increase in prejudiced thoughts and actions.

Disentangling a "Trump effect" is a question more complicated than space here permits. But this overall trend—a historic low in 2014, followed by a rise—actually parallels another: the tendency in the crime rate. 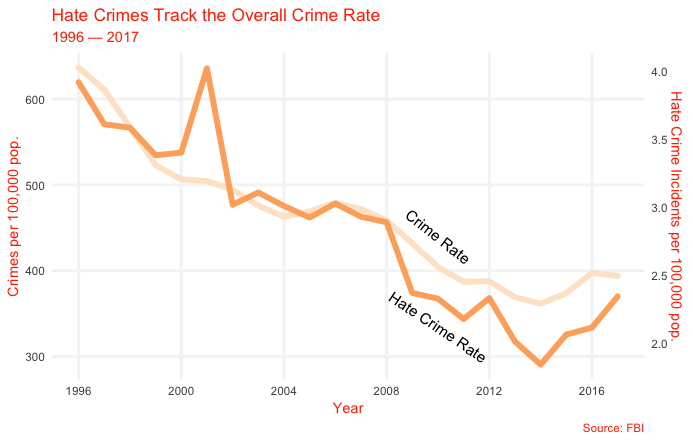 The overall crime rate, and especially the violent crime rate, rose in 2015 and 2016, before tapering off in 2017. It's not clear why, with commentators blaming everything from increased scrutiny on cops to increased availability of handguns. But it would make sense to think about hate crimes and crime overall as rising and falling together, especially if the crime rate is determined by the rise and fall of the permissibility of antisocial behavior more generally. 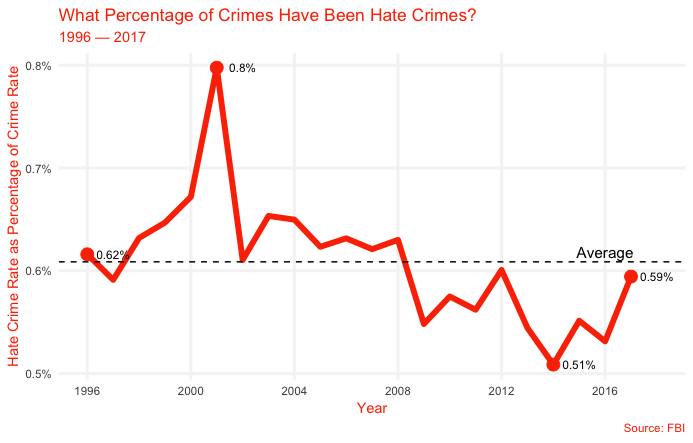 Simply dividing one by the other shows that as of 2017, hate crimes had more or less returned to the historic average for hate crimes as a proportion of all crimes (an average likely slightly distorted by the outlier year of 2001). In other words: hate crimes have recently been a disproportionately low percentage of overall crimes, and are returning to recent history levels.

To summarize all this: the rate of hate crimes has risen from its historic low in 2014, but still remains well-below historic norms—just like the overall crime rate. Claims of historic highs are dramatically overstated, but America has certainly done better on the issue in the recent past than it did as of 2017.

Additionally, there are two specific reasons for concern. First, the overall crime rate dropped in 2017, while the hate crime rate continued to climb. If this trend persists into 2018, it might indicate that the causes of hate crime and of crime overall are not one-and-the-same, meaning more serious analysis is required to disentangle the etiology of the hate crime rise.

Second, specific subgroups are facing elevated levels of hate crimes. There were roughly 300 more anti-black and anti-Jewish hate crime incidents in 2017 over 2016; the two groups are routinely the most targeted victims of racist and anti-religious hate crimes, respectively. 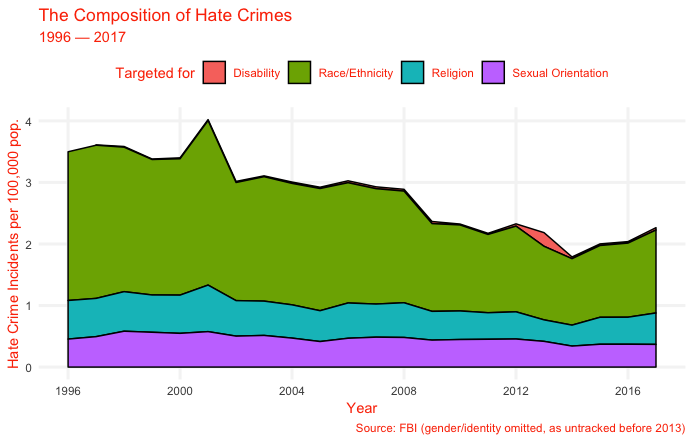 Especially if the number of hate crimes did rise in 2018 separate from the crime rate, policy makers may need to look more seriously at what has driven that increase. That includes asking what has caused increased targeting of black and Jewish Americans. Final figures on 2018 are unlikely to be available until the end of the year.