Middle East envoy Martin Indyk was overheard at an upscale Washington, D.C., bar bashing Israel and fully blaming it for the recent failure of peace talks with the Palestinians, according to an individual who overheard the conversation and described it as a surprising and "nasty" 30-minute-long tirade against the Jewish state.

Indyk—who has been identified by the Washington Free Beacon as the source of a recent series of anonymous quotes in the press condemning Israel—was caught openly lashing out at Israel over drinks with several members of his staff and wife, Gahl Burt.

The conversation took place in the hotel bar at the Ritz-Carlton on Thursday night, shortly after Indyk finished delivering remarks at the Washington Institute for Near East Policy’s (WINEP) annual gala.

While Indyk was critical of Israel in his public remarks, he and his staff are said to have let loose on the Jewish state over drinks before Indyk was scheduled to meet with former Israeli Defense Minister Ehud Barak.

"The tone was nasty," according to the source who overheard the conversation.

Indyk and his staff "openly blamed" conservative Israeli politician Naftali Bennett and others for "sabotaging the [peace] negotiations" by issuing permits for new Israeli housing blocks in Jerusalem.

"In the 30 minute conversation, no one at the table mentioned a single wrong thing the Palestinians had done," according to the source who overheard the conversation. "There was no self-criticism whatsoever."

Indyk’s staff also weighed in on the peace process, saying that while the press may believe that peace negotiations broke down over Palestinian Authority President Mahmoud Abbas’ unilateral bid for statehood at the United Nations, "they knew the truth and that [talks had broken down] way before that due to settlements," according to the source.

"The staff relished how critical Indyk was of Israel in public speech," the source said. "They laughed about it."

Indyk also took aim at WINEP executive director Rob Satloff, who had moderated a question-and-answer session with Indyk earlier in the evening.

Indyk "was incredulous" that Satloff had offered an alternate explanation of the settlement issue, one that applied less blame to Israeli Prime Minister Benjamin Netanyahu. Indyk told his crew that Satloff’s explanation "was just false" and that no one he knows believes it.

The conversation then turned to Israel’s treatment of the Palestinians, according to the source, who additionally provided a hand-drawn map of the bar area pinpointing Indyk’s location. 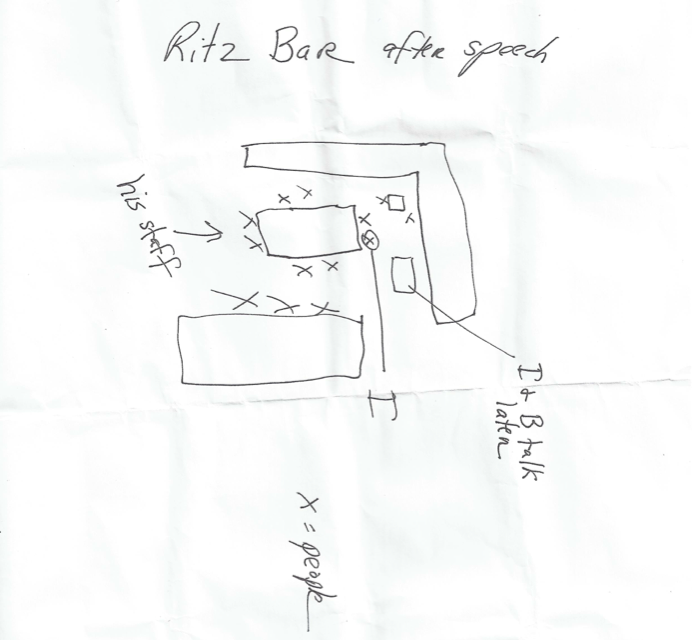 Indyk and his team expressed shock about reports that Palestinian children have had to wade through sewage spills in the Gaza Strip, which is under Hamas rule.

Those at the table went on to blame Israel for the sewage issue, accusing it of diverting clean water to Israeli "settlements" and allowing the sewage to flow into Palestinian areas.

Indyk’s wife Burt was heard to be particularly inflamed by this issue, according to the source.

Several Indyk staff members around the table also discussed their views about the West Bank being primarily a "human rights issue."

These staffers said that they would like to address technical issues such as the electrical grid and water distribution between Israel and the Palestinian territories, "but that they get tied up into politics," according to the source.

All of those around the table also "took pleasure in Indyk’s public bashing of Israel in his speech," according to the source. "Whatever supposed even-handedness there was in public … was absolutely gone in private."

Indyk also had harsh words for WINEP founding member Barbi Weinberg, a former official at the American Israel Public Affairs Committee, according to the source, who recalled that Indyk referred to Weinberg as a "right wing nut job."

Toward the end of the conversation, Indyk mentioned running into Daily Beast reporter Josh Rogin earlier in the evening.

Indyk and his team "openly disparaged" Rogin for a recent series of stories detailing controversial private remarks by Secretary of State John Kerry, who was caught on tape by Rogin referring to Israel as an "apartheid" state.

Indyk and his team expressly disapproved of Rogin’s stories, saying "what nerve" the reporter had to record Kerry’s private remarks.

Indyk later broke off from his team when Barak arrived in the bar, according to the source. The two then engaged in an hour-long conversation at the bar.

The tone of Indyk’s barroom conversation was very similar to the anonymous, critical quotes he was identified as giving Israeli reporters in recent months.

Indyk did not respond to emailed requests for comment.

"What you've heard is categorically false. It didn't happen, period," said Marie Harf. "After Ambassador Indyk gave a public speech where he said both sides were responsible for the breakdown in talks, he spent five minutes chatting with his team—and did not say one word about Israel."

"That was it. What your secondhand source has told you is just not true," Harf said.

The Obama administration’s effort to blame Israel for the failure of peace talks has angered some on Capitol Hill.

"Since the latest round of peace talks began over nine months ago, we’ve seen a not so subtle attempt by the [Obama] Administration, through the media, to browbeat Israel into more and more concessions and to shift the onus of the outcome of the negotiations on the Israelis while giving a pass to [Abbas’s] intransigence," Rep. Ileana Ros-Lehtinen (R., Fla.), a member of the House Foreign Affairs Committee, told the Free Beacon.

"Instead of forcing further rounds of negotiations, President Obama and his team should first focus on reforming the Palestinian Authority which has been plagued with corruption, waste and the inability to govern effectively in order to lay even the most basic foundations for any future state, and they must convince the PA to abandon all notions of a unity deal with the terrorist group, Hamas," she said.