A new report released by the U.S. Sentencing Commission (USSC) shows that immigration and drug trafficking, especially along the southern border, are the primary source of federal offenses.

The USSC, which has as one of its responsibilities the collection and analysis of federal sentencing, collects information from the nation's 94 district courts, divided as they are into 12 circuits. That information forms the basis of the Commission's Sourcebook of Federal Sentencing Statistics, the 2017 edition of which the Commission released Tuesday.

The federal justice system is relatively small, as measured in the number of people it processes and incarcerates. Just nine percent of America's 2.3 million prisoners are incarcerated at the federal level, a population drawn from just a fraction of the total number of offenses committed annually in the United States.

Although it is small, the federal system serves certain vital functions, covering as it does interstate offenses. This helps explain the preeminence of immigration and interstate drug trafficking, as well as offenses like firearm trafficking and interstate fraud.

The number and distribution of federal offenses remained roughly unchanged compared to 2016, the USSC concluded, with increases or decreases of no more than a few hundred offenses in each category. In total, there were just under 67,000 federal offenses prosecuted during 2017.

Among those charges, just 2.8 percent actually went to trial; the other 97.2 percent were resolved through guilty pleas. The extreme prevalence of guilty pleas is a consistent trend federally, with the guilty plea rate hovering around 97 percent for at least the past five years. At the state level, guilty pleas are usually reached in around 95 percent of cases. This rate does not necessarily imply a high success rate on the part of law enforcement; rather, many individuals may opt to plead guilty as part of a bargain for a less harsh sentence.

The USSC's data show that drug and immigration offenses predominated among federal offenses, accounting for a combined 61 percent of offenses for 2017. Among the remaining offenses, firearms were the next most prevalent, followed by fraud. 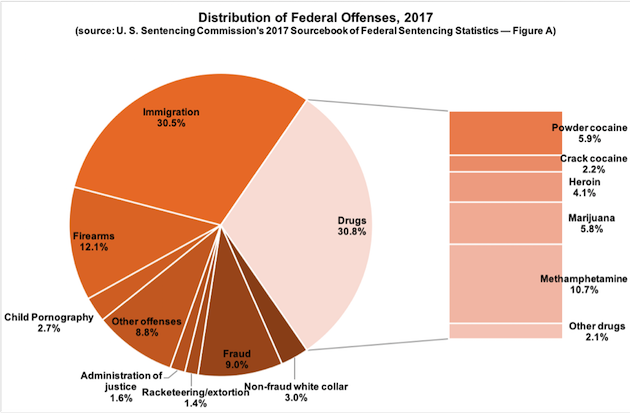 The prominence of drug trafficking offenses remains apparent when one analyzes the prevalence of offenses at the district court level. As depicted below, drug trafficking is the most common offense in 73 out of the 94 federal districts. The conspicuous exception to this rule is in the districts along the southwestern border, where immigration offenses predominate (as they do in the northern district of New York). There is also a scattered handful of districts where fraud or firearms offenses outpace others. 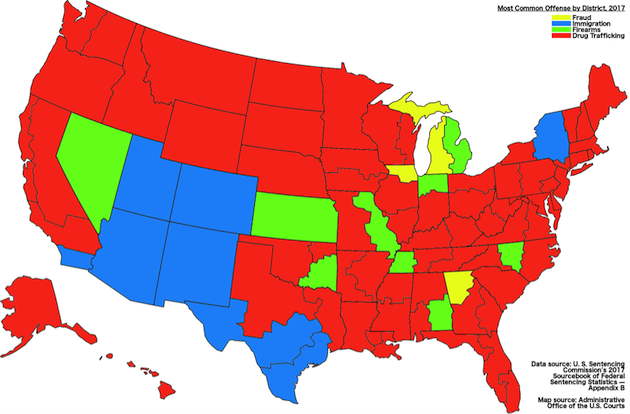 Drug trafficking accounts for the overwhelming proportion — 97.3 percent — of all federal drug offenses. The remaining offenses were divided up among a number of associated offenses, e.g., running a drug establishment. Simple possession accounted for just 1.1 percent of all federal drug charges.

The high prevalence of trafficking persists within each kind of drug that the USSC tracks. For example, just 92 people were federally charged with marijuana possession in 2017.

Methamphetamine trafficking offenses were the most common, with powder cocaine and marijuana just behind. Heroin, a major contributor to spiking drug overdose deaths, was fourth. This ordering fits with the trends in drug interdiction recently reported by U.S. Customs and Border Patrol. 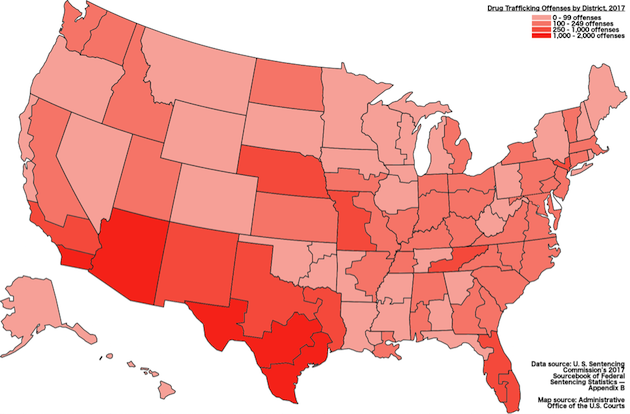 Drug offenders do tend to be Hispanic—49.8 percent of offenders, as compared to 22.4 percent white offenders and 24.6 percent black offenders—but the USSC did not provide information on ethnicity as compared against citizenship. In other words: it is hard to draw a firm conclusion from the data as to the ethnicity and national origins of federal drug offenders.

A focus on federal activity on the southwest border is warranted not only because of the prevalence of drug trafficking, but also because immigration offenses consume much of federal law enforcement's efforts. Such offenses do not include deportations, which are civil proceedings administered by administrative immigration courts. Rather, federal immigration offenses include crimes like alien smuggling, illegal reentry, and buying or selling immigration documents. 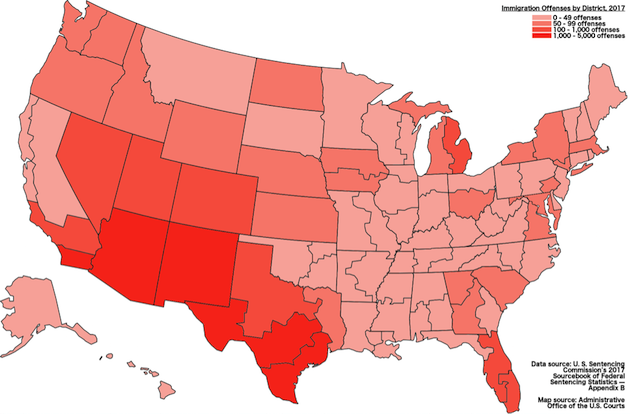 Unsurprisingly, immigration offenders are overwhelmingly non-citizens, 90 percent overall. Citizens are responsible for about a third of cases involving trafficking in or making false immigration documents, and two thirds of cases of alien smuggling.