Four heroic military dogs were honored by the American Humane Association on Capitol Hill Tuesday night for their life-saving actions while serving alongside American troops in war zones.

Taba, Jag, Summer, and Taker were all honored for their work sniffing out IEDs and providing security for American fighting men and women in Iraq and Afghanistan. The dogs were presented with the Lois Pope K-9 Medal of Courage. Each K9 had a medal placed around their neck during a ceremony in the Rayburn House Office foyer that featured top ranking military officials, congressmen, congressional staffers, philanthropists, and the media. 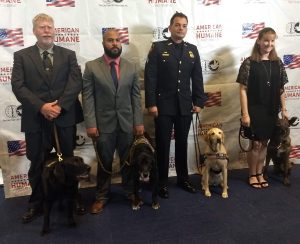 The hero dogs and their owners / Stephen Gutowski

Dr. Amy McCullough, national director of rescue and military affairs for American Humane, said the event was important to draw attention to the contributions of military working dogs as well as the struggles they and many of their handlers face once they retire.

"I'm not sure the public understands the important role dogs serve in our military," she told the Washington Free Beacon. "These dogs are amazing, and they do so much to protect us and keep us safe. The other thing they do, importantly, is they're great for boosting morale with the troops, providing comfort and a sense of home. That continues when they come back from the battlefields too."

The four dogs honored at the event all served time oversees during the war on terror. 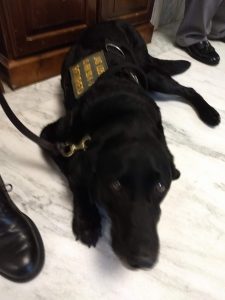 Jag, a friendly and jovial 12-year-old black lab, served in the Army with Sergeant Dennis Dow for seven years. The team deployed to Afghanistan where Jag sniffed out a hidden cache of artillery rounds on his very first mission and kept saving lives on hundreds more missions before retiring and being adopted by Sergeant Dow.

"I think it's fantastic," Dow said of Jag being honored. "We need a lot more attention on the working dogs, especially the retired ones."

Since returning home, Sergeant Dow has credited Jag's presence with saving his marriage and even his life. "PTSD has really taken a toll on me," he said. "With him, I'm back on mission taking care of my dog. I take him to see his friends every day. That helps me get a little bit better every day. By helping my partner, I'm helping myself, which is the biggest part of PTSD service dogs that's hard to explain to people. Helping the dog and getting the dog what it needs is what gets me out of not wanting to take care of myself.

"If I don't take care of myself, what's going to happen to him?"

Dow is hoping that Jag's Medal of Courage will help draw attention to efforts to get the Department of Defense to pay for care needed by military dogs once they return home and show other handlers that organizations like American Humane are willing to help them. About two years ago, Dow said American Humane paid for Jag to have knee surgery after he injured his ACL. He said having Jag happy and healthy is one of the things that keeps him happy and healthy. 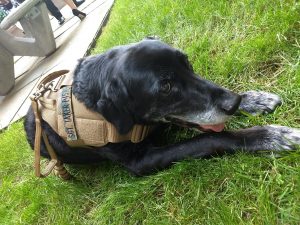 Taker, a mellow 12-year-old black lab with gray hair around his mouth and paws, served in both Iraq and Afghanistan, where he found many IEDs saving countless American lives. During his time in Afghanistan he was partnered with Marine Corps sergeant Kevin Zuniga. After the pair retired, Zuniga adopted Taker and he now serves Zuniga at home by helping mitigate the symptoms of PTSD.

"I trusted him more than I trusted my metal detector," Zuniga said. "It was very comforting knowing that he's going to catch anything that's out there."

He said Taker being honored helps shine a light on all military working dogs.

"People don't talk about it enough," he said. "By him getting awarded, the ones that didn't make it back or the ones that are still out there get a little bit of shine. That's pretty cool." 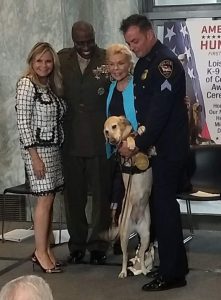 Summer, a rambunctious seven-year-old yellow lab, served oversees as an Explosives Specialized Search Dog with the Marine Corps where she found numerous weapons caches and IEDs while clearing routs and coming under enemy fire. After retiring from military service, she joined the TSA's K9 team and now protects Amtrak's Union Station in Washington, D.C., with Micah Jones. She is the youngest of the K9s and is the only one still working today.

"She's been in it all," Jones said. "She served her country proud. It's an honor for American Humane to give her this award. She rightfully deserves it."

Taba, an energetic nine-year-old Dutch shepherd, served as an Army Special Forces Multi-Purpose Canine in the war on terror. She did everything from detecting IEDs, patrolling with troops, and participating in dangerous raids during her time overseas. She was adopted by Heather and Beck Leider after being retired from service. 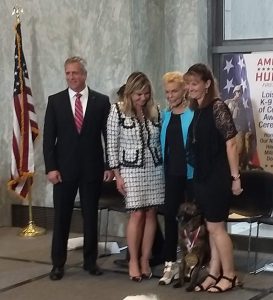 The Leiders said they were able to reach out to Taba's military handlers and find out more about the incredible work she'd been involved with overseas thanks to her being honored. They said it was important that she be given the credit she deserves.

"It's so special to be able to say she was honored this way," Heather and Beck said.

Taba recently had her right hind leg amputated after being diagnosed with bone cancer. Doctors told the Leiders she only has a few months left to live. She was happy, pain-free, and full of spirit as she received her Medal of Courage.