News that Chicago police charged Jussie Smollett with staging a brutal attack on himself was covered on every network and in every major newspaper, but Google is hiding searches of it from its platform due to concerns of "potentially disparaging" the liberal actor.

A review of Google's autocomplete function on searches of Smollett found no references to anything regarding the hate crime, even though the company's own data show it is the only reason his name was ever searched.

The top suggested searches for Smollett included Empire (a show he no longer has a role in), Mighty Ducks (a nearly three-decade old movie he had a small role in as a child), and his wife (who doesn't exist), the Free Beacon found.

Even with a nudge—adding the letter "H" to indicate an interest in the Smollett "hate crime" or "hoax"—the top suggestions were inquiries into his height and ties to Hawaii. 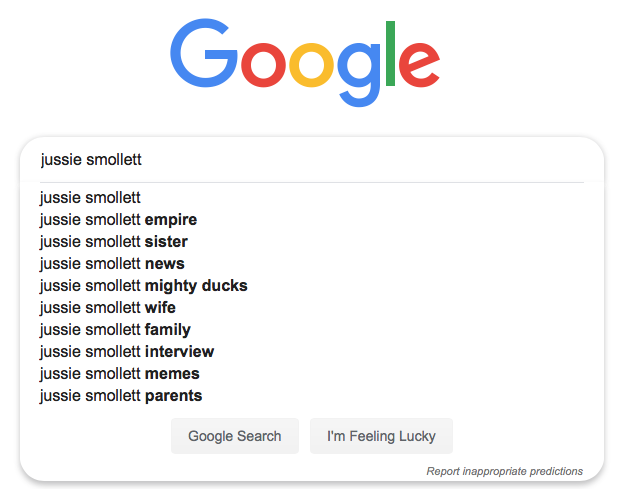 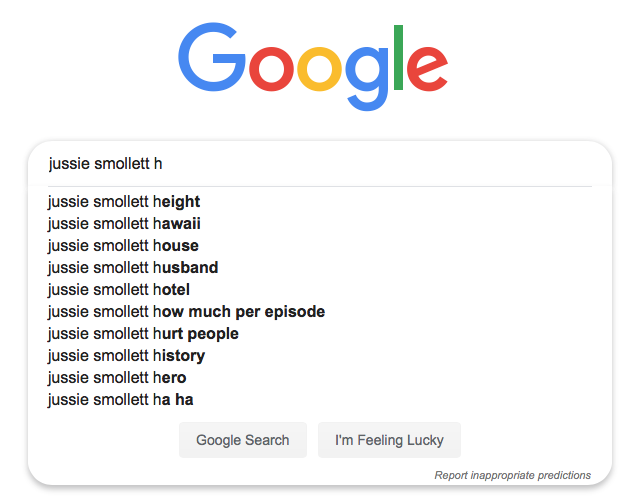 Easily accessible Google search information reveals there were virtually no searches of Smollett until he said he was attacked, and that the searches spiked further once it was revealed as a hoax.

The top queries on Smollett include "jussie attack" and "jussie smollett fake," and the top related topics to his name include "hoax," "lie," "Chicago Police Department," and "hate crime," according to Google data.

A Google spokesperson directed the Free Beacon to a specific portion of its autocomplete policy banning "predictions that associate potentially disparaging or sensitive terms with named individuals."

The spokesperson said autocomplete censorship decisions have nothing to do with what would show up in actual search results, but just the text produced by Google in suggestions.

"The policy for Autocomplete predictions does not take into account what results may appear when you do the search, but is specifically about the text in the prediction itself," the spokesperson said. "We have algorithms that will prevent predictions from appearing if we detect that they likely violate any of the policies, and if our systems miss anything and violating predictions are reported, we will remove them."

It is unclear if Google began to censor searches related to the hate crime before Chicago police said he faked it. The spokesperson did not respond to an inquiry into whether an administrator removed predictions on Smollett or if it was the algorithm.

Similar filtering appears to have been done for searches on fellow Hollywood liberal Harvey Weinstein, whose name in the search bar leads to suggestions such as "movies," "wife," and "net worth" rather than anything about the scores of women who have recently accused the Democratic donor of rape and sexual assault. 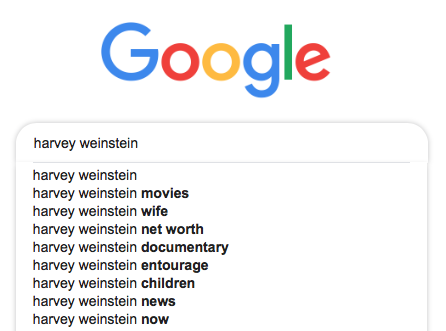 Nicholas Sandmann, the Covington High School student the media made into a villain after a video falsely portrayed him as a racist bully, wasn't a beneficiary of the policy. All the Google search suggestions for Sandmann are related to the video of him. 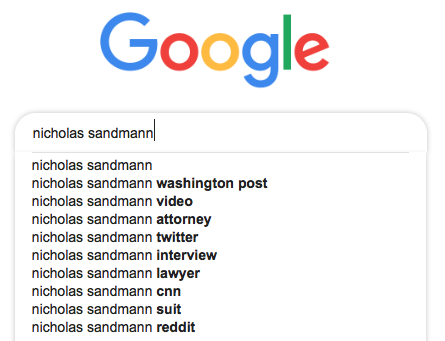 On Bing, a Google competitor, search suggestions don't appear to be censored—they're all about the hate crime for Smollett, rape accusers for Weinstein, and about the protest video for Sandmann.

Earlier this year, the Free Beacon discovered that Google resisted suggesting searches that would produce positive news about President Donald Trump following reports that the special counsel investigation would end without further indictments.

Google was accused in 2016 of attempting to boost Hillary Clinton's campaign by manipulating search suggestions to hide negative stories about her and push positive ones. The Free Beacon found numerous examples, but Google denied any intentional bias.