"Crime" and "indictment" are not the only terms Google is keeping hidden from searches of Hillary Clinton, a Washington Free Beacon analysis finds.

Common search terms associated with Clinton appear to have been scrubbed from Google as the tech giant has been accused of manipulating its autocomplete results to favor the Democratic presidential candidate.

Matt Lieberman of SourceFed released a video showing examples of Google skewing its autocomplete results for Clinton, while other search engines simply display the most searched terms.

"While researching for a wrap-up on the June 7 Presidential Primaries, we discovered evidence that Google may be manipulating autocomplete recommendations in favor of Hillary Clinton," SourceFed wrote. "If true, this would mean that Google Searches aren’t objectively reflecting what the majority of Internet searches are actually looking for, possibly violating Google’s algorithm."

Just putting the name "Hillary Clinton" into Google, you are directed towards searches for her "twitter," "email," "age," and "speech."

Notably missing is the second top result on Bing, which is of her potential "indictment."

Here are 10 more examples of questionable Google autocompletes for Clinton:

Bing gets you antichrist, antisemitic, and anti gay marriage.

Google gets you "anti obama ad."

Bing gets you vindictive and a variety of searches focusing on the death of Vince Foster.

Google recommends a search for a compilation of Vines.

Bing thinks the user is looking for her gaffes or maybe her shaky view on gay marriage.

Google thinks the user is researching her Gameboy?

Bing directs you to Clinton's top aide Huma Abedin and whether she is Clinton's lover. 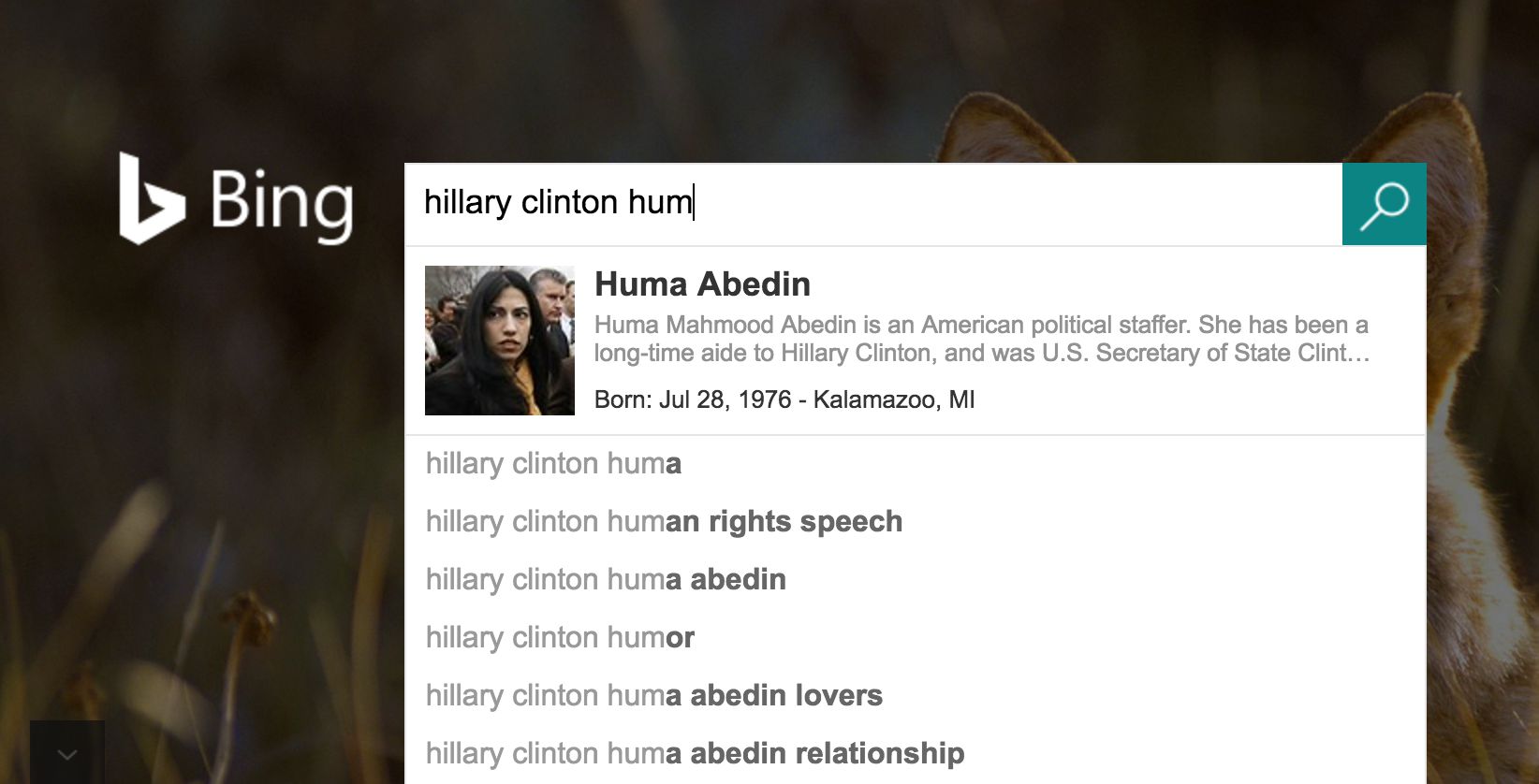 Google directs you towards a look at Clinton's humor and her status as a humanitarian.

Bing sends you over to crook or crooked.

Google sends you to cross-stitch, a common embroidery method.

On Bing, unlikable, untrustworthy, and under investigation top the list.

On Google, universal health care jumps to the top of the list.

Bing's top suggestion is a look into Clinton affairs.

That suggestion is absent from Google.

Top result on Bing is the Whitewater scandal.

This is also absent from Google, leaving just searches for Clinton doing the whip and nae nae, which are dance moves for young people.

Bing guesses that its user is looking into either Monsanto or Monica Lewinsky.

No way a Google user could be looking into Monica Lewinsky.

Google goes for LinkedIn and lipstick.