Crime Is on the Rise in New York City

Compared with January 2019, the Big Apple saw increases in robbery, assault, burglary, and larceny in the first month of 2020. The new statistics also confirm an increase in crime on the city's subways, a longtime hot spot for violence that was thought to have cooled in the past two decades.

The new figures come as the city and state struggle with a controversial new bail reform law, which mandates the release of most nonviolent offenders before trial. The uptick in crime will likely add fuel to the fire for opponents eager to see Albany modify the law or scrap it altogether.

In total, New York City in January saw a 16.9 percent increase in "index crimes" (the offenses tracked nationally to measure the crime rate) compared with January 2019. That figure includes an added 347 robberies, 116 assaults, 192 burglaries, 358 larcenies, and 243 car thefts. The city did see six fewer murders, but 15 more shooting incidents. It also saw 25 fewer rapes, although the NYPD noted that rape "continues to be underreported." 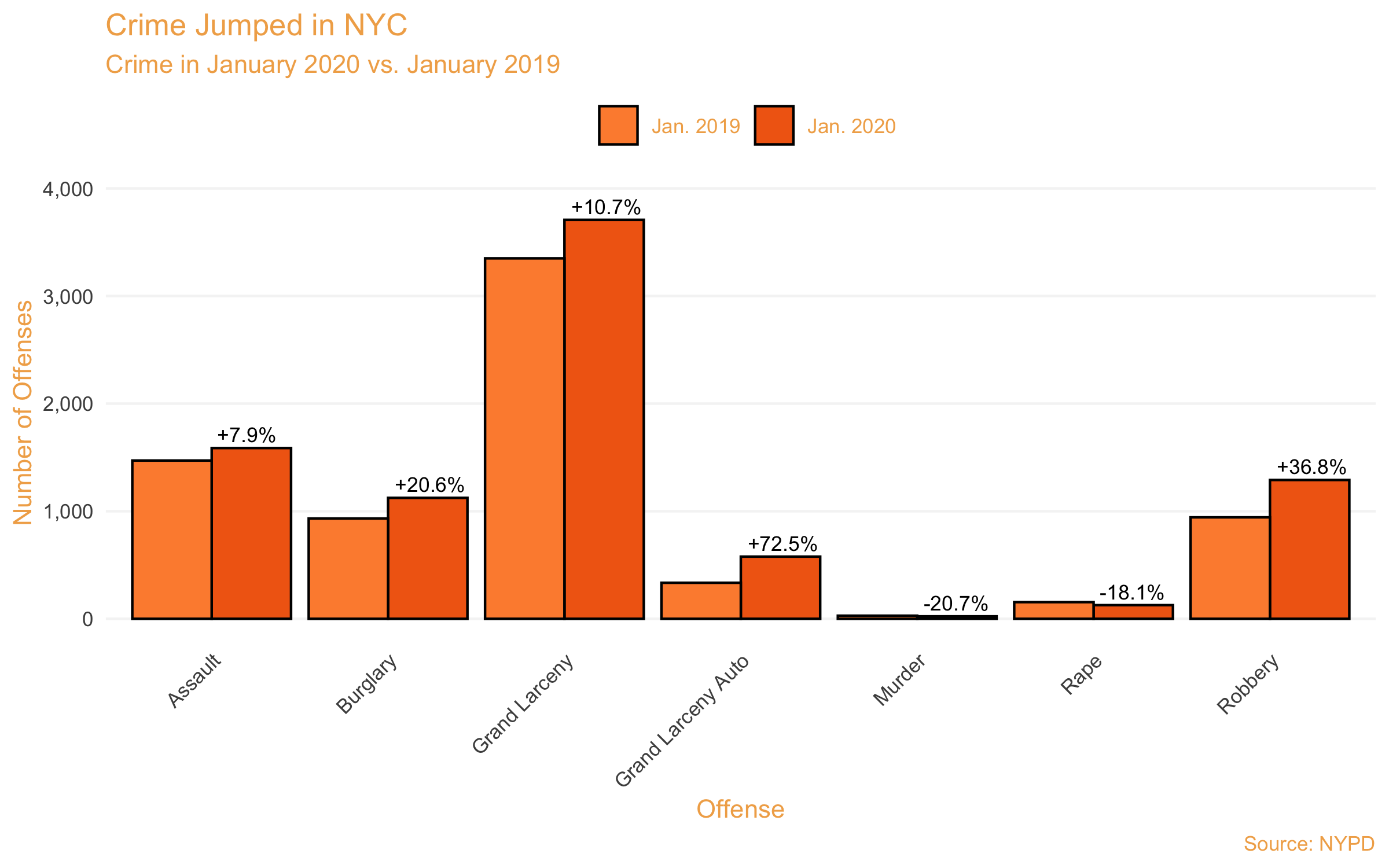 Statistics also show an added 60 transit crimes, translating into a 30 percent increase. As the Washington Free Beacon previously reported, the city saw an uptick last year in subway harassment, robbery, and sex crimes on the MTA—an increase that mirrored a surge in transit crime in San Francisco.

The uptick does not necessarily represent a trend, and more data will be needed before a conclusion can be reached about which way crime in New York is headed. But, as in San Francisco, overhauls of state criminal law likely play a role: In its announcement, the NYPD noted that it was working to "[adapt] to the challenges of criminal justice reforms."

"While it’s too soon to say exactly what is driving the crime increase, or by how much, it’s almost certain that the state’s new bail reform is driving some part of it," Mangual told the Free Beacon. "Both the sharpness of the uptick, and its timing, provide some hard-to-ignore circumstantial evidence of that being the case."

The state's new law, which came into effect Jan. 1, prohibits the use of cash bail for offenders arrested for misdemeanors or nonviolent felonies. Instead, judges are obligated to release offenders pretrial on their own recognizance or with certain limited conditions. That translates into a free-to-go pass for 90 percent of arrests, the left-leaning Vera Institute of Justice concluded, which is expected to lead to a 40 percent reduction in the state's jail population.

Proponents of the law say that cash bail—which requires individuals to put up large sums of money, either from their own pocket or from a bail bondsman, in order to be released after arrest while awaiting trial—is antiquated and systematically biased against poor and black offenders. But critics have stressed the unintended consequences of the bill's leniency, for example, suggesting that pretrial releases may have exacerbated the spate of anti-Semitic assaults that have rocked the city over the past two months.

"Bail reform has allowed scores of criminals to await trial on the streets as opposed to in detention," Mangual said. "That is highly unlikely to improve the lives of those living in their neighborhoods."

Recent polling indicates a significant shift in public opinion on the law, the New York Post recently reported. Forty-nine percent of New York state voters now call the law "bad," compared with 37 percent calling it "good." That's almost the opposite of what the Siena College survey found last April, when 55 percent of respondents were in favor, while 38 percent were against. As even liberal governor Andrew Cuomo (D.) contemplates changes to the law, it is likely that the latest crime statistics will further turn public sentiment against it.