The New York Police Department makes roughly one arrest for every four complaints of an anti-Semitic hate crime, department data show, making anti-Semitic crimes one of the least likely to result in arrest.

Data released by the NYPD and covering three years' worth of hate-crime complaints and arrests show that anti-Semitic hate crimes are by far the most common source of complaints, accounting for 49.2 percent of the total. Anti-Semitic offenders, however, account for just 32.6 percent of hate crime arrests.

While it is hard to conclude from these data what explains this disparity, they strongly suggest that not enough is being done to respond to anti-Semitic crime in New York City. According to one Jewish community leader who spoke to the Washington Free Beacon, the source of this issue may not be the NYPD itself, but an "impossibly progressive" mayor who has not been serious enough about combating the issue.

The NYPD did not respond to multiple requests for comment for this article.

Since 2017, the NYPD has released quarterly reports on complaints of and arrests for hate crimes, with the most recent covering the third quarter of 2019. In that time, anti-Semitic hate crimes have accounted for almost the majority of complaints, with 515 made in total. The second-largest source of complaints is hate crimes committed against gay men, totaling 124 complaints over three years. 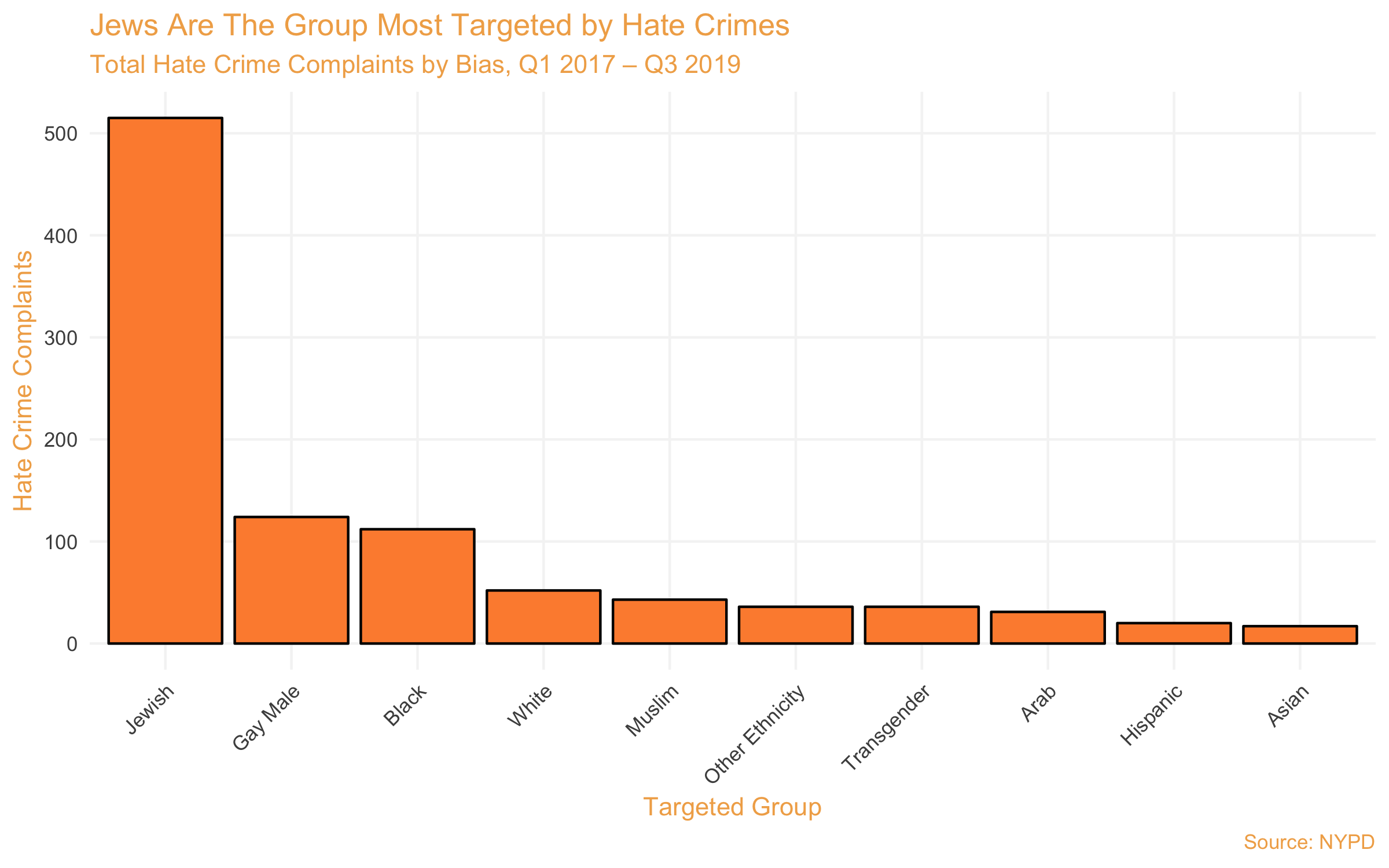 Anti-Semitic hate crimes account for the most arrests, too—143 in total. But more informative than raw counts of each is the ratio of arrests to complaints, a rough measure of how frequently a claimed hate crime results in an arrest by the police. Looking at this ratio among the 10 groups most likely to be targeted by hate crimes—accounting for 95 percent of complaints in total—reveals a concerning disparity. 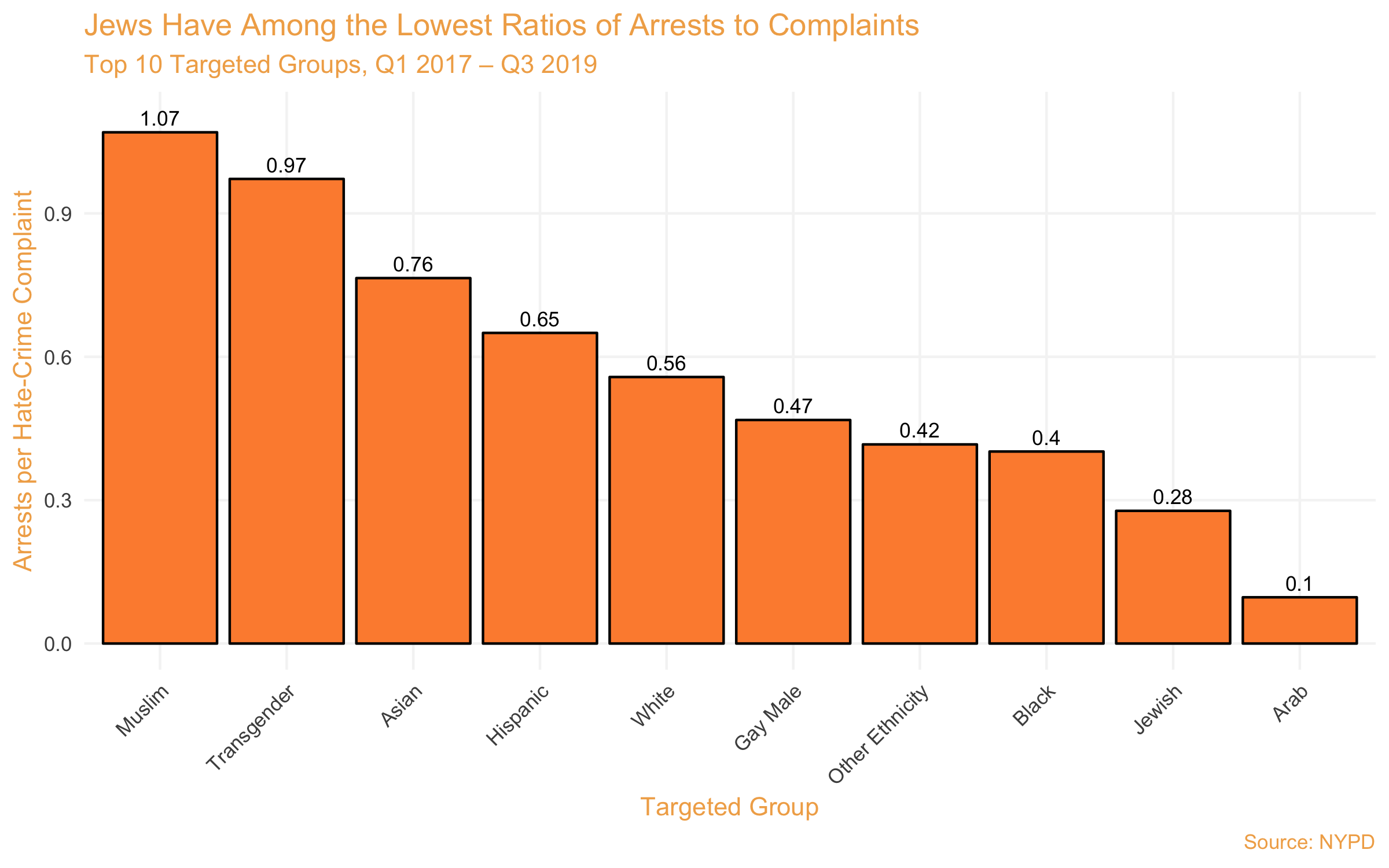 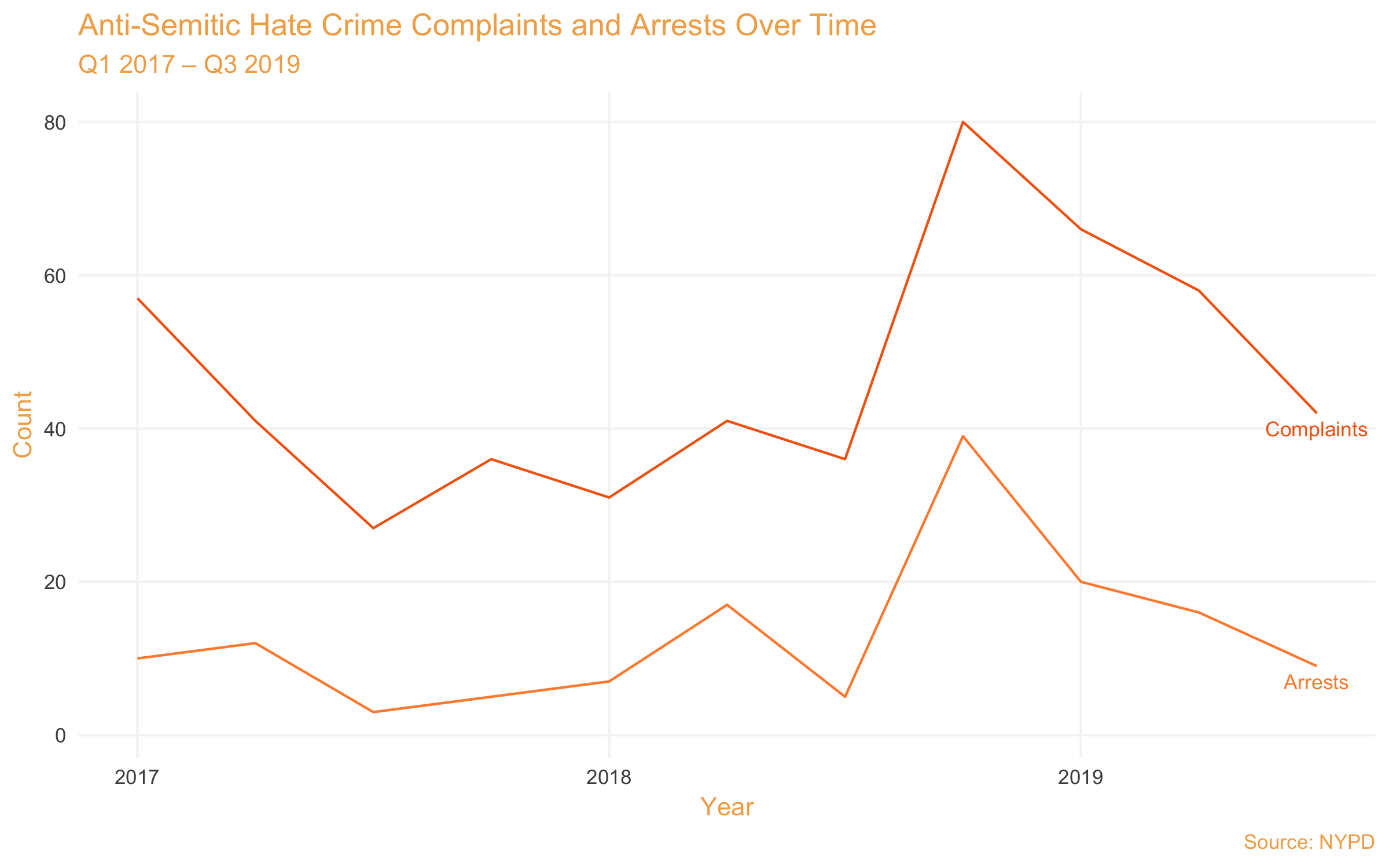 The underlying data show that arrests have risen and fallen in line with complaints, with both peaking most recently in the third quarter of 2018. At no point in the last three years, however, has the ratio risen above one arrest for every two complaints.

Rabbi Yoel Schonfeld, rabbi of the Young Israel of Kew Gardens Hills Synagogue in New York City and vice president of the Coalition for Jewish Values, told the Free Beacon that the NYPD has been "extremely caring and vigilant, certainly in my community."

"I would say that the fault does not lie with the NYPD," Schonfeld said, adding that "the problem is that the media and our politicians have failed us until now, both in publicizing the problem and prosecuting the attackers."

Schonfeld went on to suggest that under de Blasio, the police have been "handcuffed in how they engage with criminals," which has "given a tailwind to the common street thugs who have been assaulting Orthodox Jews with impunity."

While the mayor's office takes steps to increase police activity, it has also pressed for criminal justice reforms which may fuel the renewed anti-Semitic violence. Critics have been quick to point to the case of Tiffany Harris, a Brooklyn woman who, thanks to statewide bail reform, was arrested and released on recognizance three times before she was conclusively detained in custody. One of Harris's offenses included slapping three Orthodox Jewish women, to whom Harris also admitted saying, "F-U, Jews."

Harris is a beneficiary of the state's recently implemented bail reform law, which compels judges to release many offenders who would previously have been detained, including those who have committed certain robberies, rapes, and assaults. Sen. Tom Cotton (R., Ark.) on Wednesday evening became one of just many opponents to argue that the law will lead to more anti-Semitic violence.

New York governor Andrew Cuomo (D.) has suggested he would be open to adding hate crimes to the list of offenses exempted from bail reform.

Anti-Semitic hate crimes are on the rise not only in New York but across the United States. According to the FBI's Uniform Crime Reporting Program, such hate crimes rose 40 percent between 2014 and 2018, with 2017 marking the high point on record. Anti-Semitic crimes accounted for the majority of religiously motivated hate crimes in 2018.