Border Saw a ‘Humanitarian Crisis’ in 2019

The record number of illegal immigrants apprehended at the southern border represents a "humanitarian crisis" that is straining the resources of U.S. Customs and Border Protection, according to the agency.

More than 900,000 people were apprehended at the southwestern border in fiscal year 2019, including nearly 500,000 individuals traveling as families, according to the agency. This record-busting number of arrivals pushed CBP resources to the brink, acting commissioner Mark Morgan said, and diverted hundreds of officers from fighting other challenges at the border, including a tidal wave of deadly narcotics.

"These are numbers that no immigration system in the world can handle, not even in this country," he said.

Official data released by CBP reveal that apprehension levels began to spike in January and rose steadily to the May peak of almost 150,000 apprehensions in a single month. Numbers declined in the summer and fall but remained well ahead of pre-2019 levels. In September, for example, CBP reported apprehending 52,546 people, more than at any point in at least the last six Septembers. 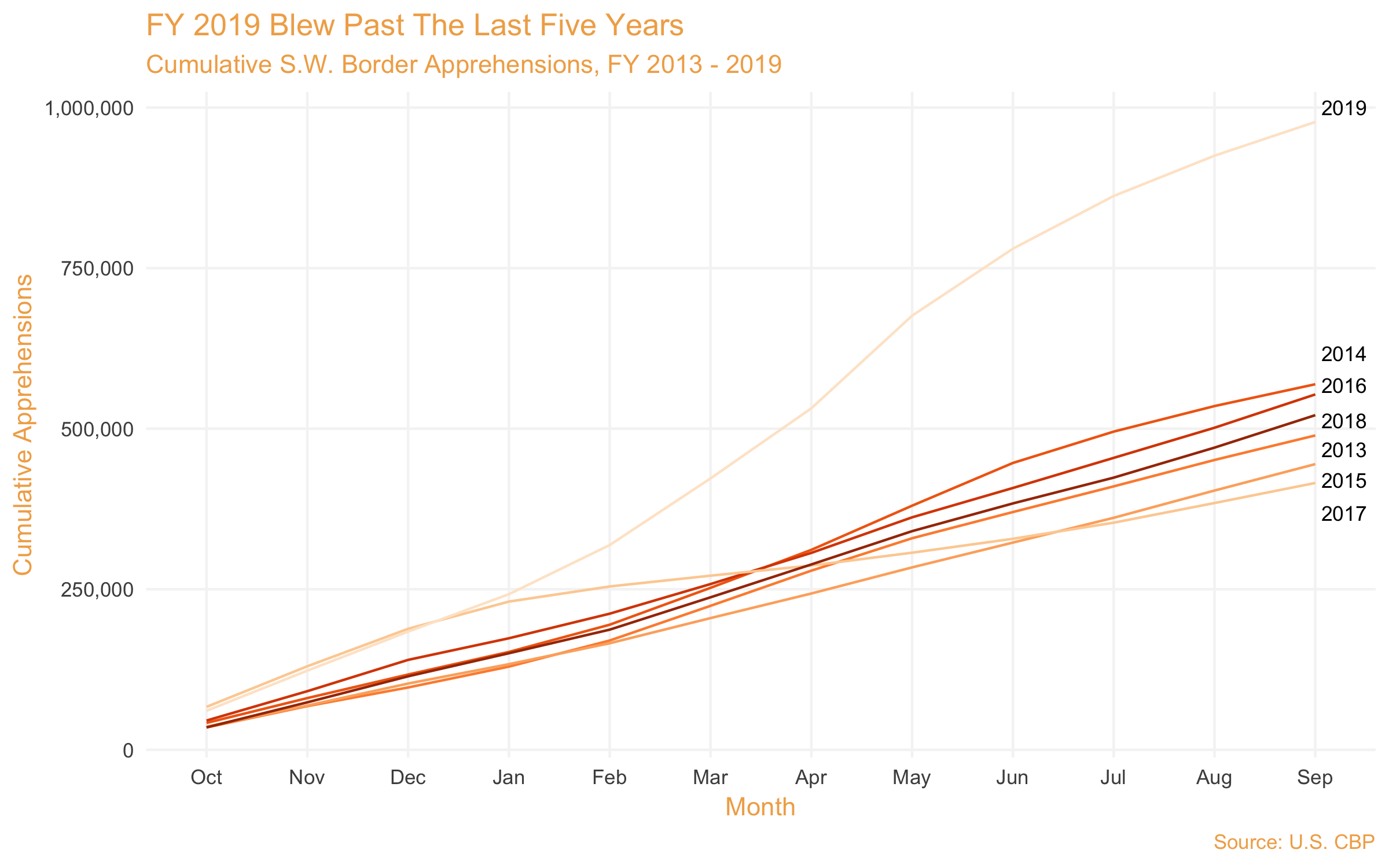 CBP is on track to detain more than a million people by the end of the calendar year, a number not seen since 2006.

This explosion in apprehensions, CBP data further reveal, was driven by an increase in "family units," meaning adults and children traveling together and claiming to be families. According to Morgan, 2019 was "the highest year on record" for family units, "342 percent higher" than the previous high set in 2018. 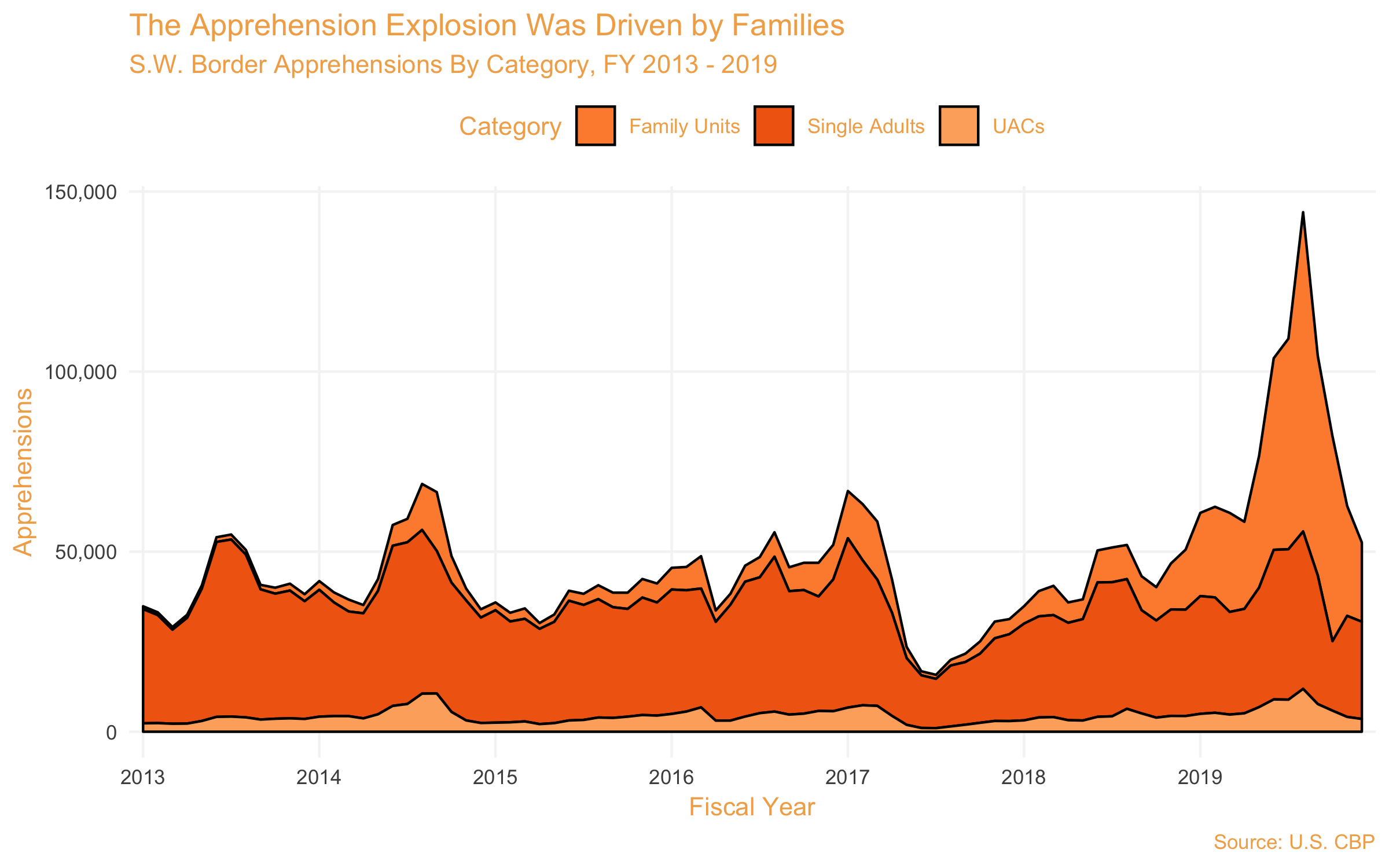 Those family units are attracted by stipulations of U.S. immigration law that guarantee asylum protections and limited detention for minors from countries that do not share a border with America. Most of those apprehended are arriving from Honduras, Guatemala, and El Salvador. This has produced a number of fraudulent family units, as adults bring unrelated children with them in order to gain access to the country.

The result, Morgan said, was a "humanitarian crisis," as hundreds of CBP officers were pulled out of their ports of operation to provide urgently needed care to thousands and thousands of apprehended people, many of them children. That, in turn, reduced the agency's resources to combat the other challenges at the border.

"This absolutely made our country less safe," Morgan said.

He pointed to the "more than 16,000 criminal aliens" apprehended in the last fiscal year, many of whom were convicted of violent crimes, sexual assaults, drug trafficking, and even homicide. Even more concerning is the influx of deadly drugs across a border that, thanks to the crisis, was less secured against trafficking than it should have been.

The volume of drugs interdicted by CBP—a rough proxy for the volume actually entering the country—has been creeping up steadily for years. The agency saw recent highs in seizures of heroin, methamphetamine, cocaine, and fentanyl in 2019, even as fewer officers were available to focus on drug interdiction. 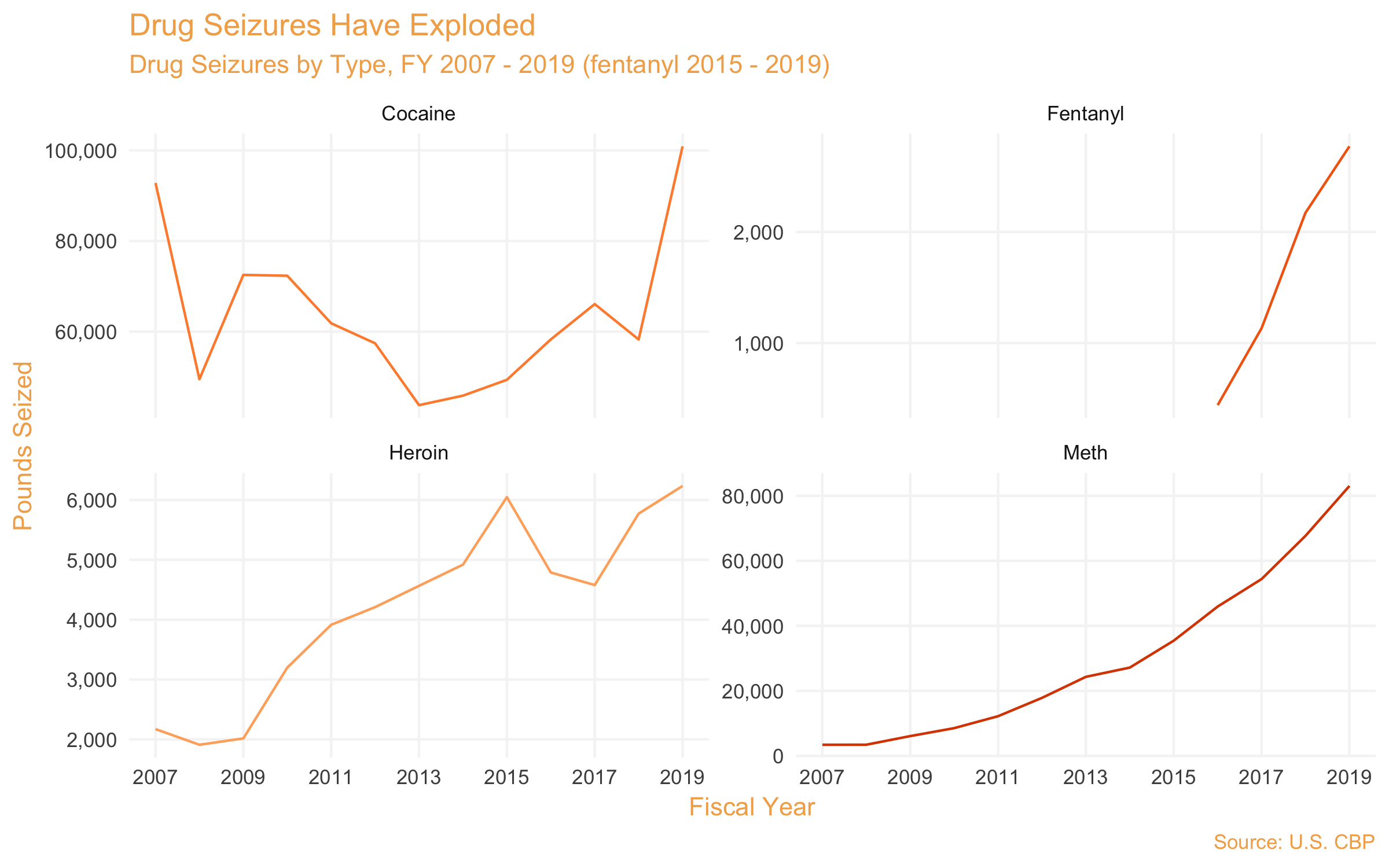 Mexican-trafficked drugs have in turn flooded into the country, driving the record-high rates of overdose death that have made drugs the leading cause of non-illness death in the United States.

"If you have an overdose in Ohio, or Detroit … more likely than not, that drug came from the southwest border," Morgan said. "We don't talk about that enough."

It does appear, however, that the crisis has abated. Morgan cheered the cooperation of Mexico, Guatemala, Honduras, and El Salvador, all of which have worked to stop the flow of migrants through their borders. Still, Morgan said, there is work to be done, particularly in Congress.

"Congress, our own Congress, refused to get off the sidelines, refused to do their job to pass any meaningful legislation to protect this country and address the loopholes in our legal framework," Morgan said. "Congress knows exactly what they need to do, and I know that because I personally have told them. Yet they have been unable to put one piece of legislation even on the floor of Congress to end this crisis."