E-cigarettes can help people quit smoking cigarettes, a new study published in the New England Journal of Medicine suggests, but may simply be helping users find a new source for their nicotine dependency.

Cigarette use in the United States has declined steadily, as anti-smoking campaigns and increasing social stigma has driven users away from the medically harmful practice. However, electronic cigarettes—which omit many of the carcinogenic elements of cigarettes—have grown increasingly popular in recent years.

Roughly 4.5 percent of adults were e-cigarette users as of 2016, and a surprisingly high number of young Americans report ever having used an e-cigarette by their 12th grade year. 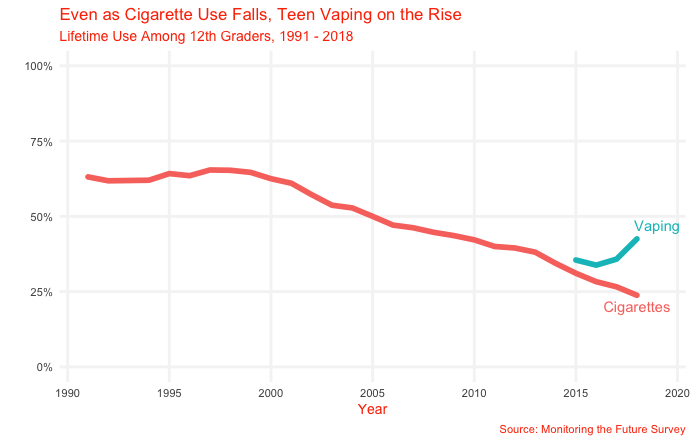 Debates over the public-health implications of e-cigarettes usually turn on the new devices' relationship to traditional cigarettes. Proponents argue that e-cigs are a vital tool for harm reduction, as they provide a healthier alternative to non-electronic cigarette use. However, opponents contend that e-cigarettes may "renormalize" smoking, and note that the long-term effects of regular use of the devices are not well-understood.

The new NEJM study contributed to both sides of this debate, presenting evidence that e-cigarettes were an effective tool for traditional smoking cessation, and that individuals using e-cigarettes to quit were highly likely to become regular users of their new nicotine source.

To conduct the study, a bevy of United-Kingdom-based researchers randomly sampled 886 adults from the British National Health Service's stop-smoking programs. About half of the subjects were assigned to a group which received an e-cigarette and "e-liquid," while the other half were given nicotine-replacement products (NRP) "of their choice," like patches or nicotine gum (88 percent used more than one product). Participants also received behavioral support for at least four weeks of treatment.

The researchers then followed up a year later to measure effectiveness of the cessation treatments. They found that the e-cigarette group was eight percentage points more likely to abstain than the NRP group (18 percent vs. 9.9 percent); they also found lower incidences of cough and nausea among e-cigarette users compared to NRP. These figures provide support for the claimed harm-reduction effects of e-cigarettes (although the small overall frequencies underline exactly how hard it is to quit cigarettes).

It is worth noting that there is pronounced disagreement in the literature on whether or not vaping is an effective smoking cessation tool. A 2015 PLOS One meta-analysis found a small increase in the likelihood of quitting when using an e-cigarette versus not, while a larger, 2016 NIH meta-analysis found that e-cigarette users were 28 percent less likely to quit cigarettes than those who did not. A Cochrane review of the available evidence concluded that ECs performed better than placebo, and about the same as NRP, but assigned a "low" certainty to its conclusions.

In other words: individuals assigned to use e-cigarettes generally were more likely to abstain from smoking cigarettes generally. But, at the same time, they did so by obtaining their nicotine fix from vaping, avoiding exposure to the known carcinogens in traditional cigarettes but not actually abating their addiction.

Whether or not it is good to substitute one form of dependency for another, safer one is ultimately a moral judgement. However, the difference in outcomes between e-cigs and NRP does have significant public health implications, both positive and negative.

On the one hand, a doubling of the success rate of smoking abstinence is substantial, given the relatively infrequent success of most attempted quitters. Contrary to popular claims, e-cigarettes are not perfectly "safe"—the CDC notes that they can still contain "heavy metals like lead, volatile organic compounds, and cancer-causing agents." Even pure propylene glycol and nicotine can have adverse effects: adolescent nicotine use can harm brain development, and nicotine is toxic to children still in the womb.

At the same time, there are positive term effects of nicotine use. Studies have found it to enhance memory and attention, and aid cognition in people suffering from schizophrenia and other neurological diseases. These personal benefits, as well as an interest in free choice, need to be weighed against the potential harm to certain groups posed by nicotine exposure.

The most important conclusion of the broader literature is that the widespread use of electronic cigarettes has swiftly outpaced science's understanding of their effects. Whether the new devices will prove a public health crisis like their predecessors, or perfectly benign, even positive, remains to be seen.