Americans Having Fewer Kids Now Than in Past 42 Years

The U.S. fertility rate hit a 42-year low in the first quarter of 2018, new data released Wednesday by the Center for Disease Control show.

New numbers from the National Vital Statistics System (NVSS) reveal that the Total Fertility Rate (TFR) has fallen steadily since the first quarter of 2016. The TFR measures the number of children likely to be born per woman of childbearing age over her life course. The rate for the year ending in Q1 2018 was 1.759 children per woman, down from the end-of-2017 rate of 1.76.

Demographic Intelligence, a firm which forecasts demographic trends, projected that TFR will continue to fall through 2018, hitting 1.74 by the end of the year. 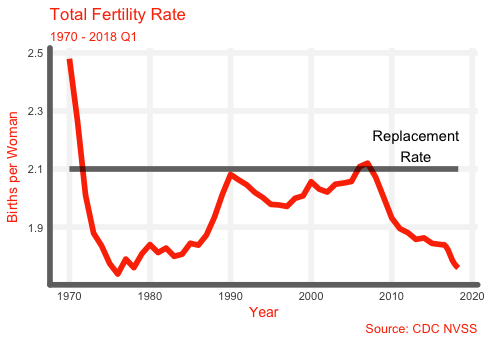 The "replacement rate"—the number of children each woman needs to have in order to "replace" herself and her partner in the population—is usually pegged at 2.1, which accounts for women who die before bearing children. As CDC data show, the United States has been below replacement fertility for decades, meaning that the size of each subsequent generation has grown smaller. A sustained below-replacement TFR eventually means that a population will stop growing altogether, as has happened in countries such as Japan, Lithuania, and Latvia.

A number of factors explain the fertility decline. American women are  opting to delay having children to older and older ages. This trend doubtless has a variety of underlying causes: women's entry into the workforce, declining rates of marriage, the prevalence of effective birth control, and substantive changes to how our culture views childrearing's role in the complete life.

"Younger and less-educated women are hesitant to have children," said Sam Sturgeon, president of Demographic Intelligence. "They are more determined than an earlier generation of women to have ‘all their ducks in a row'—in terms of their education, income, and relationship—before having kids. So, they're taking longer to have kids, and having fewer of them."

Decomposing the TFR trends by age group confirms this trend. The number of women having children in their thirties has risen steadily since the mid-1970s. Indeed, 2016 was the first year more children were born to women age 30-34 than to women age 25-29, which had been the most common age group for childbirth for decades. 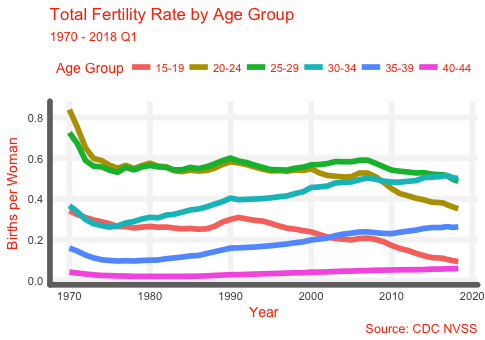 Notably, the number of teenage girls—ages 15 to 19—has also fallen steadily. The rate for girls age 10 to 14 has been persistently below one child per 1,000 women since 1999.

Later childbearing almost certainly has some good consequences. It is, for example, likely tied to the historic low abortion rates the United States currently enjoys. At the same time, the socioeconomic trends driving later and less motherhood raise a number of concerns for policy makers and the public. Slowing population growth can mean lessening human capital, which in turn can drive economic stagnation. And smaller and smaller generations means a larger glut of older people in U.S. society.

This trend will further exacerbate the insolvency of age-transfer welfare programs like social security, which will likely be bankrupt in the next twenty years. That insolvency is driven by the high numbers of baby boomers entering retirement and the lower numbers of working age Americans there to provide for them through payroll taxes.

Beyond such macro-trends, it quite possible that American women are not only having fewer children, but fewer children than they would like to have. Demographer Lyman Stone has argued that numerous surveys indicate that women want between two-and-a-half and three kids, on average, suggesting that women are not opting out of childbearing but rather lack access to the resources and institutions—predominantly marriage—to allow them to create stable, successful families of their desired size.

This article has been updated to more accurately describe the associated data.