Despite higher spending, achievement has flatlined

American schoolchildren's educational attainment has stagnated in the 21st century, according to data from two recently updated assessments of reading, math, and science skills.

Results from the National Assessment of Educational Progress (NAEP), released in November, and from the Programme for International Student Assessment (PISA), released Tuesday, indicate that American kids have seen minimal improvement in their academic abilities since the early to mid-2000s.

"For all of these ambitious efforts we've seen unfold, they don't seem to be making much difference, at least when it comes to measured student performance in reading and math," Rick Hess, an education policy expert at the conservative American Enterprise Institute, told the Washington Free Beacon.

Experts who spoke with the Free Beacon agreed that the causes of this stagnation are unclear—as one put it, "it's always kind of a guessing game as to what's behind these numbers." At the same time, this flatlining suggests that the education experiments of the past decade, and in particular of the Obama administration, have had minimal benefits on student achievement and may even have hindered the most disadvantaged students.

The NAEP, commonly referred to as the nation's report card, is an assessment of academic proficiency taken by a sample of 4th, 8th, and 12th graders across the country. The test covers a number of subjects, but the most closely watched indicators of academic improvement are the fourth- and eighth-grade reading and math evaluations. 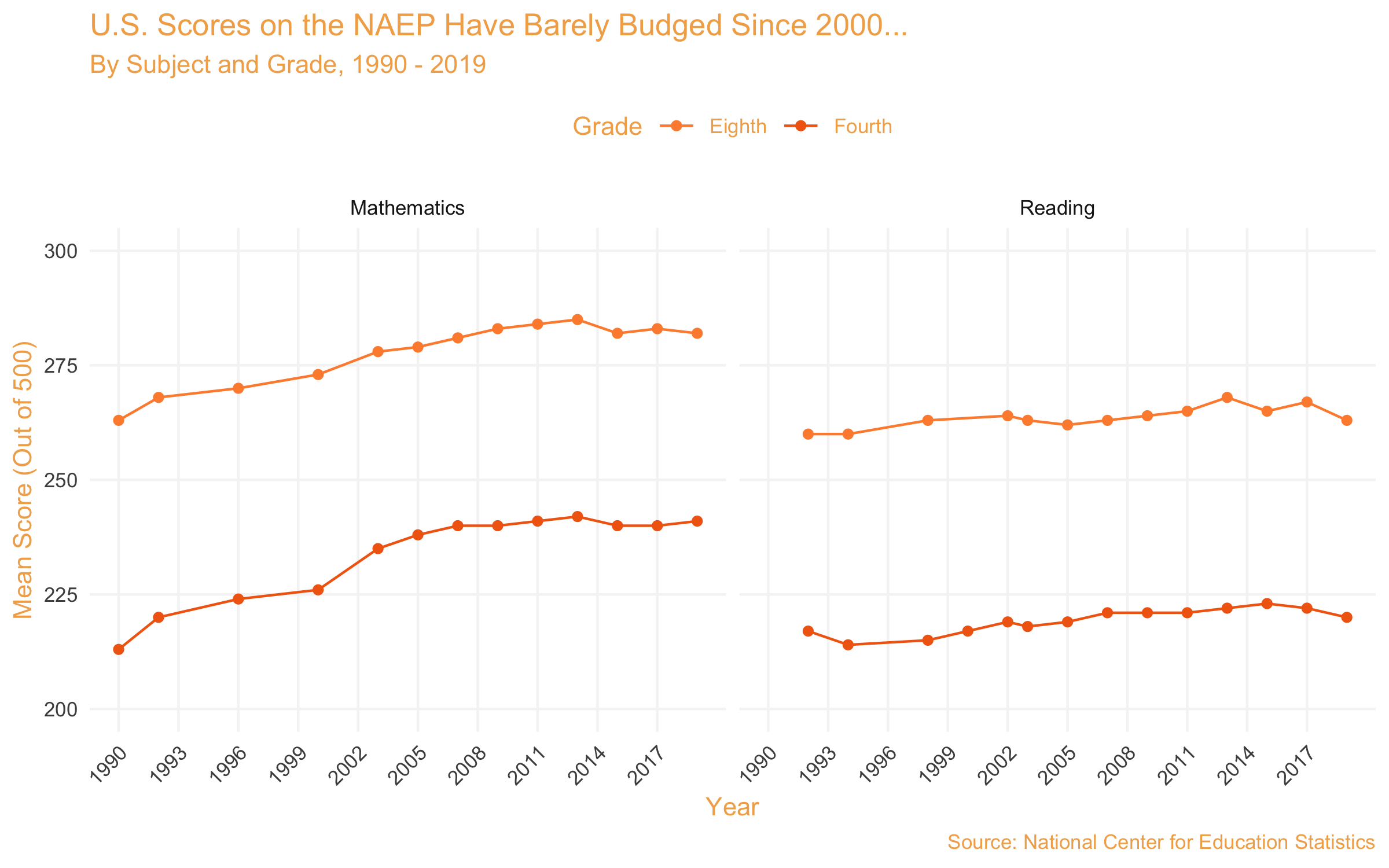 Through the 1990s and early 2000s, achievement, particularly in mathematics, rose steadily, but then began to flatten out. As a report from the Brookings Institution notes, "for both fourth grade and eighth grade, the average [math] scores from 2017 were identical to the average scores from 2009." Fourth-grade reading scores have been more or less flat since the 2007 assessment; eighth-grade scores have seen improvement, but not on par with the early growth in math scores.

This flatlining obscures an underlying trend: Over the past decade or so, NAEP scores among African-American students, particularly boys and particularly in major cities, have actually declined. That means that the much-bemoaned "achievement gap" between black and white students—which much of education policy is focused on closing—may be widening.

"You saw substantial gains by black children relative to white children from the mid-'70s to the '90s, and you saw some of that in the early years after [No Child Left Behind]," Hess said. "One of the striking things has been that you have actually seen a worsening on some of these fronts, both in terms of low-income children and also black children."

A similar overall trend is apparent in the PISA, a triennial assessment of 15-year-olds in nations around the world. The United States outperforms the OECD average, but that performance is not a product of improving test scores—in fact, PISA scores have been more or less flat since 2000. 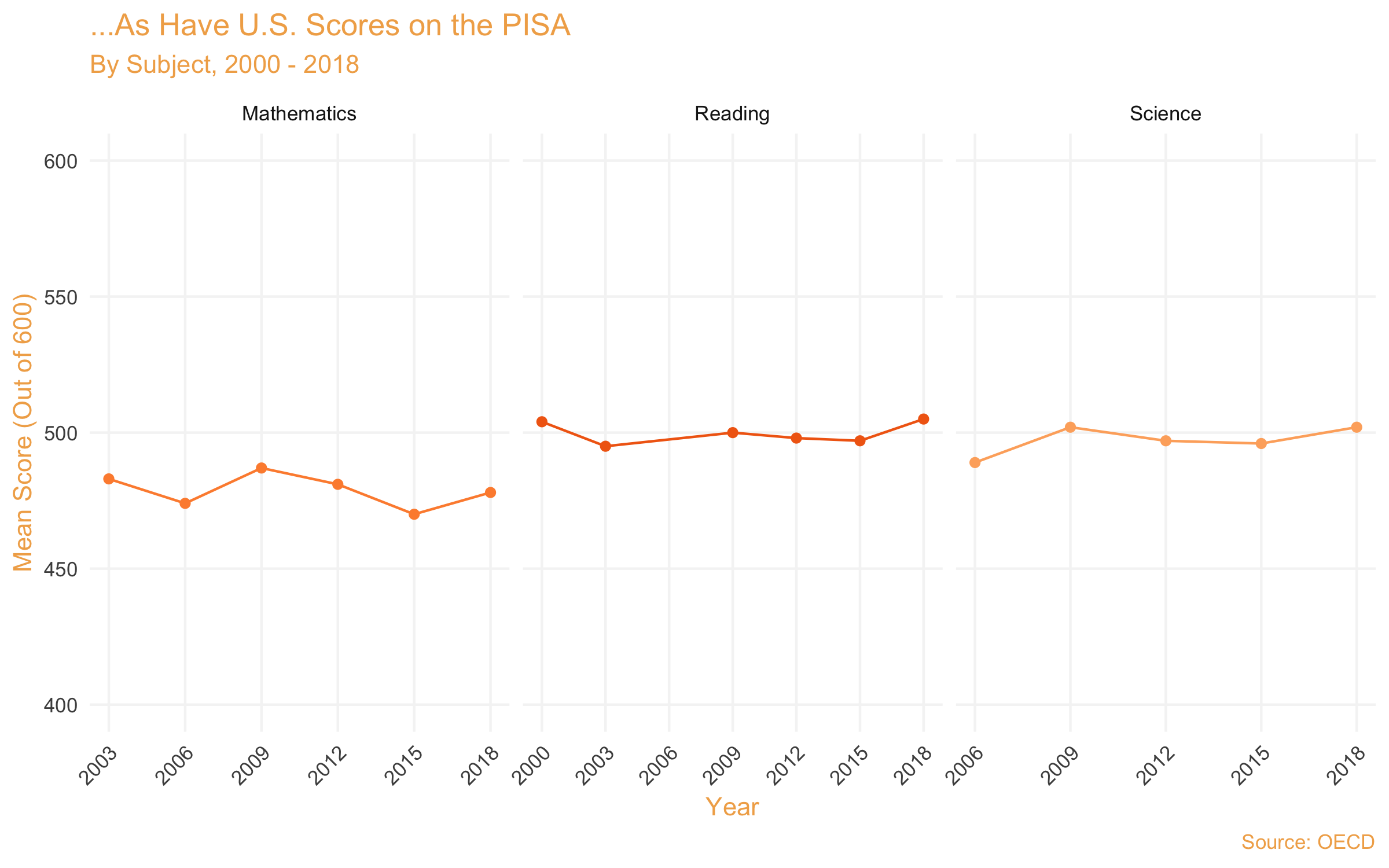 The 2018 PISA, released last week, does show at least one bright spot: The share of Americans performing at the top levels in reading increased by about 4 percentage points between 2009 and 2018. But even those gains may not be cause for celebration, as there was no similar improvement among low-achieving students.

The flatlining of test scores has taken place even as national spending on education has risen steadily. Through most of the 1990s, when NAEP scores tended to rise, per-pupil spending in primary and secondary schools was below $10,000. Today, spending has easily cleared $12,000 per pupil with little improvement in performance. 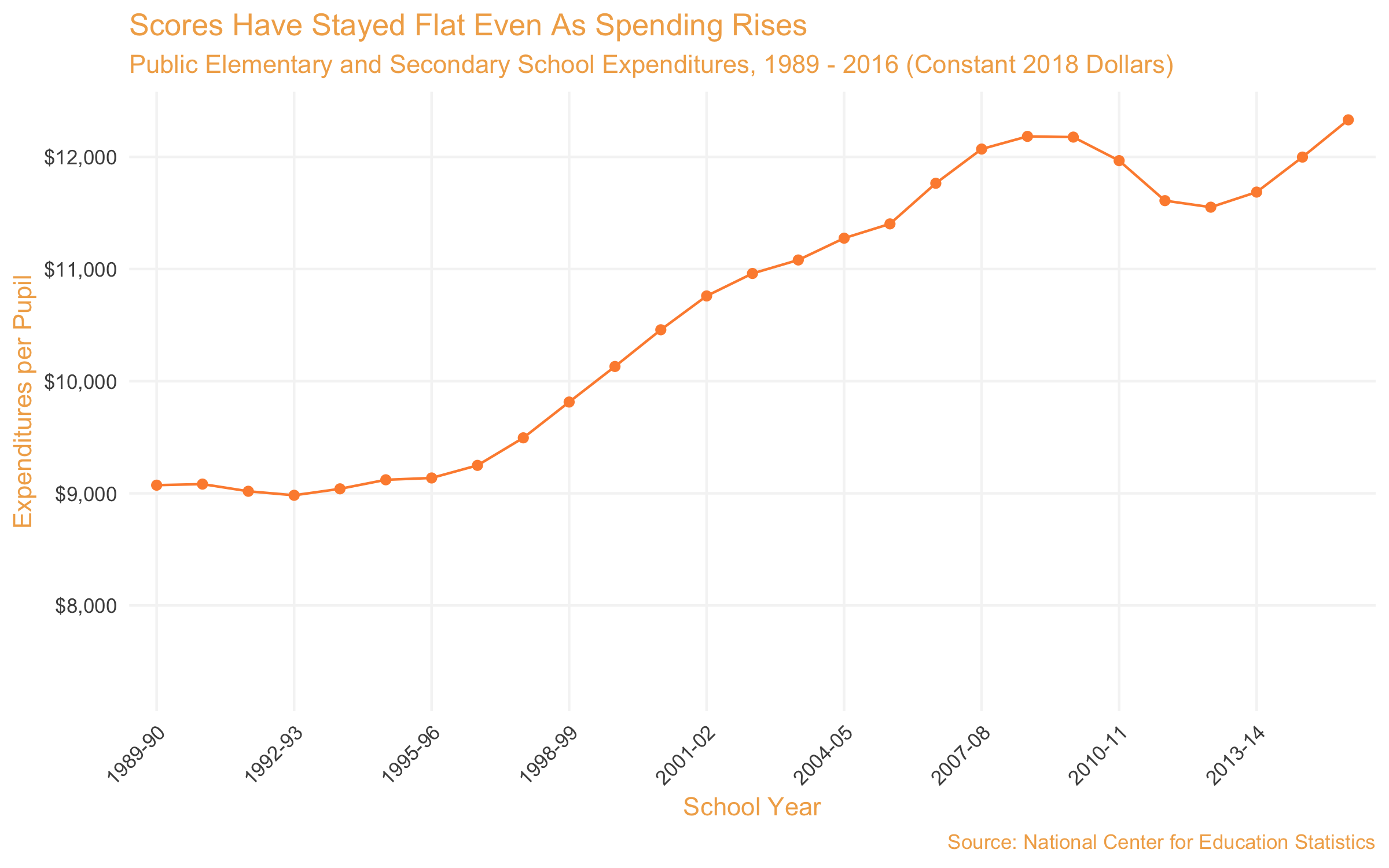 The underlying cause of this stagnation is unclear. Experts the Free Beacon spoke to did not quite agree when it began—most agreed that there was a bump after the implementation of No Child Left Behind, but disagreed about when that increase slackened off. Michael Petrilli, president of the Thomas B. Fordham Institute, a leading education think tank, linked the flattening to the Great Recession.

The recession "likely had a huge negative impact on kids, especially poor kids from the most disadvantaged families," Petrilli told the Free Beacon. "When you're looking at some of these latest results, these are kids who were sort of born into the latest recession or were quite small during the worst years of unemployment."

School spending also declined in the wake of the recession, Petrilli noted, although at no point did it fall below pre-Great Recession levels. It's a plausible story—even post-recovery, the recession appears to have fundamentally altered the spending, job-seeking, and even childbearing practices of young adults, so why not also their children's educational outcomes? This, Petrilli argued, means that we may not see more NAEP growth until the Great Recession cohort ages out of school.

Max Eden, an education expert at the Manhattan Institute, is not so sure. While offering the caveat that it is hard to draw many conclusions from the data, he suggested that the Obama administration's Common Core did not deliver on its promises to increase achievement and may have actually harmed socioeconomically disadvantaged students. Eden also pointed to Obama administration efforts to reduce school punishments and suspensions—policies it perceived as racially inequitable. One recent study conducted by the nonpartisan RAND corporation found that "restorative practices" in punishment actually worsened educational outcomes in grades six through eight.

"I'm very much inclined to believe that this push towards discipline reform, to try to lower suspensions and expulsions … will do more harm than good," Eden said. "I don't think policy can do nothing at all, but I think that the policies we have implemented have done more harm than good."

The bad news is not limited to the United States. Eden noted that just as NAEP scores are a blow to Common Core, so too is the rapid decline of PISA scores from Finland, once heralded as a model for education policy.

"The people who had been the central opinion makers of education policy were just pretty fundamentally wrong," Eden said. "About 15 years ago Finland was the top-scoring country, pretty near the top in the world, and if you Google for ‘Finland education,' you'll find just hundreds and hundreds of articles written about how the Finland model works.… But just about no country has fallen farther, faster over the past few years than Finland."

Hess agreed with Eden's skeptical view of what the education establishment has pitched during the stagnation and emphasized that policy can only go so far in changing outcomes.

"The idea that policy can do little to shape education in the short term is always correct," Hess said. "That's been true for a half century plus. Folks have been trying to use federal policy to change school outcomes. All policymakers can really do is move crude levers.… For those things to actually change what happens in schools is at best a multiyear process."