Greenfield featured a photo of Chad Kuntz, his father, and his son at their Oakville, Iowa, farm on an October mailer in which the Democrat pledges to "work hard for Iowa families and their futures." The image suggests that Kuntz and his family—who have farmed corn and soybeans in the state for five generations—support Greenfield's candidacy. Kuntz, however, told the Washington Free Beacon that he is actually a staunch supporter of Ernst.

"Theresa Greenfield has our image on a flyer, but Joni Ernst has our vote. My family will vote that way as well—we're very strong supporters of her," Kuntz said. "That flyer is not a genuine depiction of an Iowa farmer who supports Theresa Greenfield. It's kind of a sham." 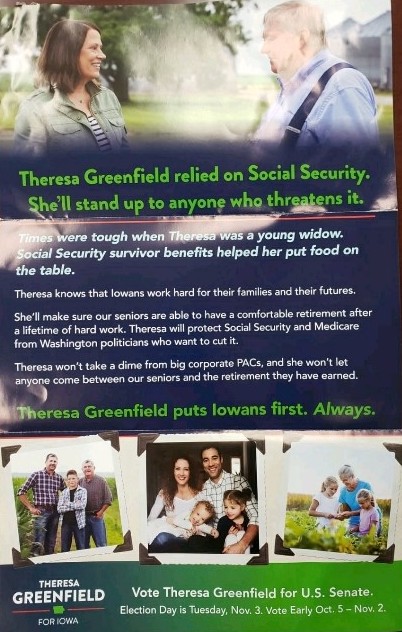 Greenfield has attempted to court rural voters by touting her background on a family farm in Minnesota, often calling herself a "scrappy farm kid" in the process. But the Democrat failed to gain the support of Iowa's three largest agricultural groups—the Iowa Farm Bureau, Iowa Corn Growers Association, and Iowa Cattlemen's Association have all endorsed Ernst in the race.

Kuntz told the Free Beacon that, if elected, Greenfield and her Democratic colleagues would over-regulate Iowa farms.

While Kuntz did not legally object to Greenfield's use of the image—he told the Free Beacon that he took it at the request of a friend and knew it would be used as a stock photo—he said that he would have appreciated a "courtesy call" from the Greenfield campaign.

"When the flyer showed up, I said, 'Rats, I wish that I would have at least been given a courtesy call to ask for permission.' Because we definitely do not support Theresa Greenfield," Kuntz said. "I'm not crying over spilt milk here. I realize I don't have a say in where the image goes. My say is when I go and vote."

Greenfield's liberal allies have attempted to undermine Ernst's rural support in the closing days of the race. In a now-deleted Sunday tweet, Senate Majority PAC communications director Rachel Irwin peddled a fake email claiming the Farm Bureau had rescinded its endorsement of Ernst. Farm Bureau leaders quickly debunked the attack in a Sunday statement, writing that Ernst "understands agriculture and works tirelessly to increase the economic opportunities for Iowa farmers and rural America."