A Stanford University dean approvingly quoted a domestic terrorist wanted by the FBI for the murder of a police officer in a "safety email" sent to university students on June 1.

In a message addressing the nationwide protests and riots that followed the death of George Floyd at the hands of police, the university's dean of students, Dr. Mona Hicks, cited the "loving" words of Assata Shakur, who was convicted in 1973 for the murder of a police officer and remains on the FBI’s "Most Wanted" list.

"As a Black woman, I am also struggling to make meaning in our world today…. This loving refrain from Assata Shakur still rings true as I shelter-in-place: 'It is our duty to fight for our freedom. It is our duty to win. We must love and support each other. We have nothing to lose but our chains,'" Hicks said. The quote Hicks cited borrowed from the words of Karl Marx, who wrote in The Communist Manifesto that workers have "nothing to lose but [their] chains."

Shakur was convicted of the first-degree murder of State Trooper Werner Foerster during a shootout on the New Jersey Turnpike in 1973. She was a member of the Black Liberation Army, a group responsible for killing police officers as well as for a series of bombings, robberies, and prison breaks. She was sentenced to life in prison but escaped six years later and fled to Cuba. Shakur remains on the lam and on the FBI’s "Most Wanted" list 41 years later.

"A quote like that, in a letter where you’re giving guidelines for peaceful protests, is downright disturbing and inflammatory," Blanchard said. "[Shakur] outright murdered a New Jersey State Trooper and conspired to critically wound another."

In her note, Hicks said there is an "undeniable intersection of systemic oppression for minoritized people." She also listed a handful of resources for students to use if they participate in protests. The resources included Stanford's "Know Your Rights" guide on protests and demonstrations, which specifically recommends resources from the left-leaning American Civil Liberties Union. The dean also recommended the ACLU's "Mobile Justice" app.

Neither Hicks nor Stanford University responded to requests for comment.

The Arizona state senate Democratic caucus included the same Shakur quote in a Friday statement condemning police brutality. The caucus retracted part of their press statement after Republican backlash over the inclusion of the quote, according to AZ Central.

"I don't know a soul who believes the killing of George Floyd was anything other than reprehensible and unwarranted but for the AZ Senate Democrats to quote a cop-killer on the FBI Most Wanted Terrorist List in a press release is truly mind blowing," said state Rep. T.J. Shope.

I don’t know a soul who believes the killing of George Floyd was anything other than reprehensible and unwarranted but for the AZ Senate Democrats to quote a cop-killer on the FBI Most Wanted Terrorist List in a press release is truly mind blowing. https://t.co/ShliiR0rTW

State Democrats claimed they were unaware of Shakur's "past criminal conviction and current status."

"This is a quote used frequently in social justice and activism circles and we know [Shakur] as an author and well-known commentator on civil rights. Yet it has come to our attention her past criminal conviction and current status. The use of the quote was not intended as an endorsement, but to emphasize issues of social justice," the party's official state senate account said in a tweet.

Blanchard, of the state troopers association, said that calling attention to a convicted cop-killer and domestic terrorist is not the best way to condemn violence.

"There are glaring differences between a peaceful protest and the reaction to the George Floyd incident … and it is in no way, shape, or form comparable to what [Shakur] did," Blanchard said. 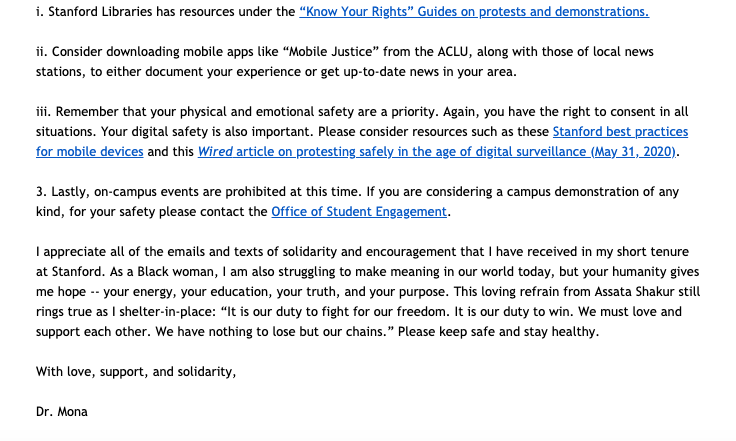