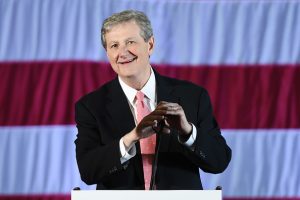 Sen. John Kennedy (R., La.) joked at Tuesday's state dinner about the fact France sold his home state of Louisiana to the United States in 1803.

Kennedy, referring to the Louisiana Purchase of the early 19th Century, said he wanted to thank France for making the sale, according to a White House media pool report.

Kennedy was attending a State Dinner at the White House hosted by President Donald Trump and First Lady Melania Trump in honor of French President Emmanuel Macron and his wife Brigitte.

At part of the state visit the first of Trump's administration, Macron will address a joint session of Congress on Wednesday. The first foreigner to do so was French aristocrat and military officer Marquis de Lafayette, whose portrait hangs in the House chamber.