NEW YORK CITY—She is the young woman who patiently explained to the homeless man in the subway station that playing fretless would greatly increase his guitar's tonal range. Now she is arguing with her boyfriend as they wait in line for OZYFEST outside Central Park's Rumsey Playfield.

"Those are the new Oxfords I want," he says, pointing down to the man's shoes in front of them.

She tosses her home-dyed red hair to the side: "You know I don't approve of that."

"Hey, come on," he says. "They have less branding than before."

She squints at the tiny Cole Haan tag peeking out from where the shoe's quarter meets its throat. It's kind of subtle, actually. But that's not good enough: She scowls and sips her grapefruit Spindrift while the line dribbles into the playfield.

Little scrutinies like this set OZY apart from the typical summer arts festival. It isn't just about entertainment. This gathering is a benchmark for how the young, hip, and casually left-wing should understand the world as it is in 2018.

The New York Times heralds OZY as "part music festival, part TED talk, part food fair," but a better description might be "Left-Wing CPAC." In the same way that CPAC attempts to fire up young conservatives about the future of the movement, OZY tries to juice up young New Yorkers with the best—or at least the most trendy—thinkers and entertainers in liberal America. This year's speakers' line-up boasts DNC chairman Tom Perez, pop historian Steven Pinker, and #MeToo activist Rose McGowan. Among others, the entertainment features the Pandora Radio-era bands Young the Giant, Passion Pit, and Grouplove.

But above the whole spectacle hovers the Banquo's ghost of neoliberalism: Hillary Rodham Clinton. The ex-presidential hopeful's headlining interview later this Saturday—a painful reminder of her failure to clinch the White House in 2016—throws everything around her into a dour mood, not helped by the storm clouds gathering over Central Park.

A quick survey of the festival reveals typical Upper East entertainments—nifty fusions like lemon aioli-covered french fries and the now-pedestrian avocado toast. Away from the main stage and food stalls, a niche marked GOOD SH*T bursts with books curated by the OZY staff: the latest Zadie Smith novel, the collected works of Roxane Gay, and an assortment of other hardcovers featured prominently in the New Yorker's recent ads. 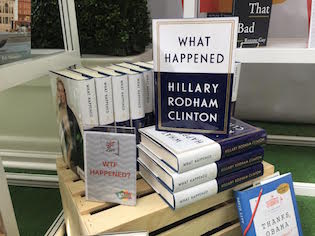 Enshrined on a crate at the front sits Clinton's 2016 tell-all, What Happened. OZY advertises it with the all-caps ledger: WTF HAPPENED? On another box a few feet away, a kids' book about Clinton tells a different story. It's called Hillary Rodham Clinton: Some Girls Are Born To Lead, and features a school-girl cartoon of Clinton posed proudly in front of the White House. It was published in January 2016—10 months before the election.

Down on a bandshell away from the main action, Pinker admits to a panel that he almost made the same mistake when writing his 2018 best-seller Enlightenment Now: The Case For Reason, Science, Humanism, and Progress.

"In the first draft of the chapter on equal rights," he tells the crowd, "I wrote that one of the signs of how women have progressed is that the leaders of the three most influential nations in the world—Germany, Britain, and the United States—are all women. Whoops. I missed the mark there."

"Progress doesn't mean that everything gets better for everyone all the time everywhere. That wouldn't be progress. That would be magic. The fact is that overall, we're living longer; we're living safer lives. We're better educated. Most things are great."

A woman standing in the back pats her boyfriend's posterior in what appears to be an affectionate gesture: There's more to this world than just Hillary—we still have each other.

Or at least that's the message the drag queen Eureka sends everyone back up at the main stage. Before the political events begin, he's conducting a mock-up dating show with three men and one woman pulled randomly from the crowd.

"What is your biggest imperfection?" he asks.

"Well, I try really hard to be perfect at everything," one of the guys answers. "Sometimes I try too hard. I guess you could say my biggest imperfection is that I'm a perfectionist." 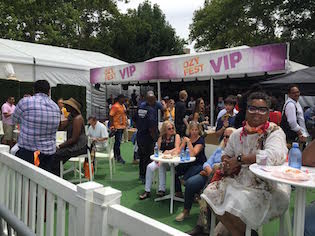 The people in the VIP section hoot with enthusiasm. Their place of privilege looks just like the astroturfed plot laid out for us hoi polloi, except they get free rosé, a tented viewing area, and fake trimmed hedges to shield their chairs from those beyond their white picket fence. A woman holding the inevitable New Yorker tote smirks and drops her beer into a trash can. It's full of wasted food and plastic straws.

"We don't date in Sweden," another guy onstage says. "So this concept is new to me. We just get drunk and go to home together."

The whole crowd laughs and claps. The drag queen suggests a twerk-off to close out the event.

But the levity is short-lived. Because next up are the day's token conservatives. Moderator Ana Kasparian trots out Rep. Mark Sanford (R., S.C.) and Americans for Tax Reform president Grover Norquist.

"It might sound weird, but I think it's important to have a conversation about this with people that we may disagree with, so we can actually come up with better solutions to run the country properly," she tells the crowd. A few people cheer. Most politely golf-clap.

"I kinda want to talk about your thoughts on Trump," Schlesinger says to the two on stage.

Norquist jumps in headfirst and sidesteps the question. He praises state-level efforts at criminal justice reform, reserving criticism only for Jeff Sessions and the attorney general's office. Then, citing statistics and trends within both parties, he explains that he believes less focus on the presidency and more emphasis on the legislative branch of the federal government would benefit the nation at large.

Schlesinger responds: "I can't wait to get into a deep dive on policy issues and especially criminal justice reform. But just to be clear," here she turns outward, "With Jeff Sessions and the Justice Department, and as far as the Trump administration goes, we haven't seen any changes—I'm sorry—any positive changes on that issue."

"Well, at the federal level," Norquist says, "but if you look at the states—" and he launches back into the statistics. People start leaving.

"You have been one of the members of Congress who has most vocally criticized Trump," she says.

At the mention of Sanford's opposition to Trump, the crowd cheers wildly. He looks out on the expanse of Vineyard Vines, concert t-shirts, and fru-fru mixed drinks with a hangdog face that seems to say, I wish I actually had been hiking the Appalachian Trail in 2009.

"Well," Sanford replies, "I believe one of the great things about this country is that we can agree to disagree. Trump doesn't seem to understand that. He runs the nation like an autocrat."

The people love it, but Sanford doesn't want to talk Trump. He tries to shift the conversation to defining conservative principles for his mostly-liberal audience. Schlesinger won't budge from Trump. She tries again to reach Norquist, but he's still lost in the world of numbers. They ramble at each other for another 20 minutes.

"Thank you all for listening so politely to an enlightening conversation," Schlesinger says at the end, as she cuts Norquist off in the middle of his sentence.

Half the crowd goes foraging for more food.

When Tom Perez and CNN's Dana Bash take the stage next, the conversation re-centers on Clinton. Bash tries to corner Perez with serious questions about his party's leftward leap since the 2016 defeats, but Perez dodges. He's more interested in whipping up his audience into a frenzy about the midterm elections. At the end of the interview, he shouts with a Howard Dean-like crack in his voice: "And don't forget about Mississippi! And Texas too—Ted Cruz has national recognition. And that's his problem. Beto O'Rourke is putting up a strooong fight!"

A strong fight, sure, but it can't undo the Trump moment. For all its fanfare about the future, OZY is a carnival of mourning: When Clinton lost, she didn't just fall. Her whole world fell.

Down, farther away from the festival—parked right beside one of the Central Park ponds—a ponytailed man who looks like he stepped right out of a Spike Lee Joint rests on a bike. He stares out at the lovers rowboating around the pond. His boombox plays Elton John's "Rocket Man."

A loud siren cuts through his serenity. He turns around and sees a black Crown Vic with tinted windows crawling its way through the plaza in front of the lake. Its intermittent beeps and flashing sirens sweep the plaza clear of tourists.

Pigeons fly up in the air as the car rolls down onto the path around the pond in its somber procession of one. It presses forward without regard for the men, women, and strollers avoiding its advance. When the lights flash, bystanders catch a glimpse through the dark windows at the people inside.

"Is it her?" a man pressed against the pond's retaining wall asks under his breath. "Is it her?"

But it's impossible to know. There's an older woman in the backseat, for sure, a water bottle perched on her clasped legs. A dark-suited man with an earpiece talks to her from the other passenger's seat. When the car ascends back to the road, a police escort follows it on another loop through the park.

Half an hour later, the Crown Vic makes the same loop again. About 20 minutes before the Clinton speech, a fleet of black cars and SUVs assemble at a service entrance behind OZY's main stage. The NYPD lead them up the hill in a dull grind, as the crowd cheers for the rapper Common, whose exit marks Clinton's entrance.

And what an entrance. Several thousand New Yorkers pushing up against the stage to catch a glimpse. Tater tots trampled. Beers discarded. A young Latina woman in a straw hat weeping for this moment — the Dowager Empress here, on stage, and in a dress. She Persisted. I'm With Her.

"Lock her up!" a troll in the back yells. The spell is broken.

And so is Clinton. In her interview today, she offers her devotees a list of the same old woes. Trump on the border, Trump in 2016, Trump in Helsinki—we've heard these scolds before, but when Clinton speaks, they carry a sort of pathetic gravity. She bears the demise of an entire movement.

"It's really distressing and alarming," she says of the alleged Russian involvement in her defeat. "It should concern every American of any political party because this was a direct attack on our democracy."

Distressing. Alarming. The moonstruck mob gathers today on this fake plastic lawn to offer its aged leader sympathy. A masseuse in the back offers free massages for anyone too stressed out to face her wreckage.