For reasons that are still mysterious to me—you might say it’s a holy mystery—I decided to attend this year’s Reason Rally in front of the Lincoln Memorial. In the words of its organizers, the rally is meant to celebrate "secular, atheist, agnostic, humanist, freethinking, and nonreligious identities" and "showcase the presence and power of the nonreligious voting bloc, and to demand that reason be put at the forefront of our public and political discourse." According to its website, there will be "awesome speakers, bands, entertainment, and political leaders," including a member of the D.C. City Council, a Maryland state representative, a five-minute televised speech from Bill Maher, and a Beatles tribute combo. Will they play "Let it Be," I wonder?

On my way to the rally, just outside the World War II Memorial, I see my first two attendees—unless they are just random tourists wearing "There is no God. Have a great day!" t-shirts—lose control of their Segway electric scooters and crash into one another.

An older couple standing about 20 feet away looks over at them. The man, who is finishing a Popsicle, rolls his eyes, but the woman bows her head thoughtfully. I think she has decided to be embarrassed on their behalf.

I arrive in front of the Lincoln Memorial too late to hear the D.C. Gay Men’s Chorus perform, but am just in time for the Pledge of Allegiance. Do I need to spell it out, or can you guess why we’re doing this? Everyone in the audience grins with delight when "under God" is omitted. From their faces you get the sense that it’s the edgiest thing they’ve done since that time they wrote "ASS" on the chalkboard just after recess while the teacher was finishing her coffee in the break room. For confirmation I ask Tim, who is wearing a Four Horsemen t-shirt—not a metal band but a popular group moniker for those New Atheist luminaries Christopher Hitchens, Daniel Dennett, Sam Harris, and Richard Dawkins. 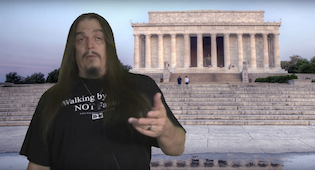 "Yeah, it always feels good standing up to these ignorant pieces of shit," he says. I don’t know which ignorant pieces of shit he has in mind, exactly, but I assume that pseudo-menacing defiant talk like this is something that reason dictates. Looking around, I see that reason also dictates ponytails, goatees, silly jewelry, merchandise with lame slogans and dorky puns, obesity, bad taste in music—spotted in the crowd is what must be America’s only extant Cake t-shirt—a general lack of social skills, and copious amounts of sweat. These are not refined, sneering, aristocratic atheists of the Voltairean sort, whose company I admit to enjoying on the page. They are man-children who, from their conversation, make it clear that they check Reddit boards obsessively and salivate at the prospect of "owning" Christians in YouTube comments sections. 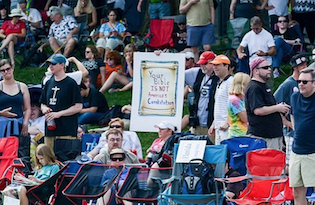 Over the course of the morning and early afternoon I try to take it all in. It is around 90 degrees out and very humid. Hundreds of people are fanning themselves with triangular pieces of cardboard that say "I’m a Thomas Paine Fan" or "I’m a Reason Fan." A group of women from PETA are hanging out with signs that read "Embrace Reason, Go Vegan" and "Eat the Flying Spaghetti Monster, Not Animals." (The latter of these, according to a recent ruling from a U.S. district court in Nebraska, does not constitute an even hypothetical inducement to deicide.) Vape pens and those little boxes that look like transistor radios are everywhere, but no one smokes tobacco except two heavy-set men I see wearing black Satanic Temple t-shirts. I refuse one of them when he asks me for a light.

At the southern end of the reflecting pool, octagenarian veterans in wheelchairs are chatting with fresh-faced young evangelicals from somewhere in the South. A woman marches up and down the path next to the pool brandishing a sign with a quote from The Age of Reason on it. She stomps her feet and darts her head back and forth but gives me a death stare when I glance in her direction. Even the people at the press check-in booth are aloof and impatient when I show up to get my credential. 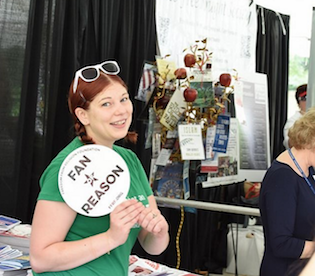 What’s happening on stage is far less interesting. I can barely see Richard Dawkins because of the massive glare, but what I hear of his Skyped-in address is tedious and self-congratulatory. As Terry Eagleton once put it, Dawkins on God is like "someone holding forth on biology whose only knowledge of the subject is the Book of British Birds." Penn Gilette cries when he introduces James Randi with the ontologically dubious assertion that "without this man I would not exist." Randi’s own remarks, delivered somewhat drily from prepared notes, on the dangers of pseudoscientific methodology in the education of autistic children, are the most reasonable thing I hear all day.

I spend more time walking around. At one point I find myself talking with Michael, who is holding a sign that says "Genital Mutilation Doesn’t Only Happen to Women." He is here with a group that opposes circumcision, which he compares to Aztec blood sacrifice. When I ask whether equating a ritual that Jews believe was initiated by Abraham at the behest of Almighty God with paying bloody homage to Tezcatlipoca via wholesale slaughter is anti-Semitic, he tells me it doesn’t matter. I try another angle and mention the universally attested health benefits of circumcision. "Those are all bogus," Michael says without blinking. "Those are put forth by the medical industry to sell their product." Michael isn’t interested in persuading other people; he wants a federal ban on infant circumcision, and he doesn’t care that this would effectively make Judaism illegal. I try to press him on this, but about seven minutes in a voice in my head says, Matthew, you are talking to a stranger in a black cowboy hat about how he washes himself in the shower and repeating words like "sensation." 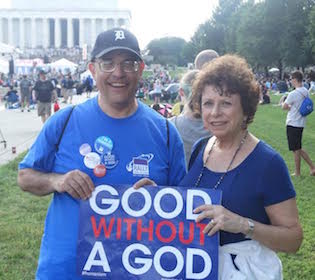 Further down the path I meet Roger and his sister who are standing in the middle of an interminable row of portable toilets handing out a pamphlet called "Christ Died for the Un-Godly." They are very suspicious of me at first. Roger doesn’t seem to understand that the word "Media" on my Reason Rally badge really does mean that I am not a mean-spirited interlocutor or hired goon here to tell him that this coveted space next to the facilities is reserved for unbelievers only. He tells me that most of the people walking by pretend he doesn’t exist. "A couple has said things that aren’t very polite."

At a tent set up on the outskirts of the rally I see a guy in a ponytail speaking in a ridiculous Adam West-esque voice—one that I have also heard minarchists and GamerGate enthusiasts use—haranguing a couple inside. They have a beautiful baby girl with them. When one of them points out that Mr. Ownage can’t even name all 10 of the Commandments he is heaping scorn on, he shifts gears.

"But how do you define murder?" he says.

Another guy inside the tent shakes my hand. This is Jonathan, who usually preaches the word in Alabama. He tells me that he grew up an atheist and that as a child he was physically and sexually abused.

"I was really messed up. I tried to cut myself with a razor. I have scars everywhere."

A family of three approaches us. The dad is wearing chinos and a polo shirt.

"Say it to him," the dad whispers to his son.

"Can you get God to give us tickets to the Nats game?" the kid says with gleeful malice.

Jonathan continues with his story as if he hasn’t heard him. 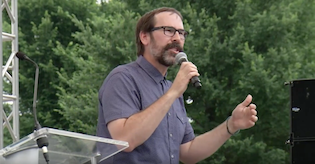 It would be better if more of the speakers on the main stage were following Randi’s lead and trying to be serious. I don’t want to be accused of having bias cloud my aesthetic sensibilities, so let me say forthrightly that I think there are such things as funny atheists. But even if I were a neck-bearded Pastafarian with a signed first edition of The Selfish Gene on my Ikea bookshelf next to my complete sets of Dune and Isaac Asimov’s Foundation series instead of a 26-year-old married father whose living room has a home altar where most people’s TVs are—complete with multiple crucifixes, brass candlesticks, images of the Virgin and my patron Blessed John Henry Newman, and a drawer for multiple copies of the 1962 Roman Missal and various other devotional books—I would still be telling you that Keith Lowell Jensen is the worst stand-up comedian I have ever heard.

"Did you guys TGIF yesterday? Did we all thank God it’s Friday? Oh, thank God, it’s Friday! I don’t know. I think I’d rather thank a union member that it’s Friday."

Almost no one laughs. Maybe this is a libertarian-leaning crowd. He tries again. 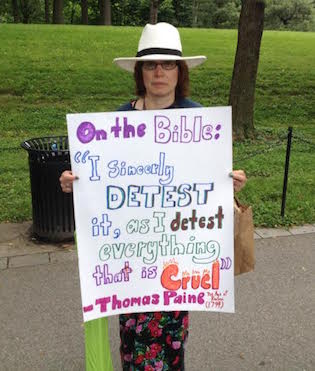 Bill Maher barely even tries to make jokes, though he does impress me by quoting the old-fashioned "O My God, I am heartily sorry for having offended Thee" version of the Act of Contrition rather than the wimpy modern one I was taught as a child. Instead he compares his role in the decline of Christianity in the West to Ronald Reagan’s in the downfall of the Soviet Union: "I helped at the end, but it was ready to go."

From where I am standing it sounds as if some of the laughter is being piped in from the speakers. But even this isn’t as bad as the Fab Four, whose second tune is not actually a Beatles song but "God," the worst cut on John Lennon’s first solo album. By the time "Trump" has been substituted for "kings" in the litany of things that the guy pretending to be Yoko Ono’s husband doesn’t believe in, I am ready to go.

On my way out I see Bethany sitting on a bench by herself. She is wearing a Reason Rally t-shirt and has been coming to these events since 2012. She tells me that she is an attorney who wants to see crosses and nativity scenes removed from every piece of public property in America, no matter what the residents of small towns have to say. "I don’t want to drive past them!" She also informs me that she’s "really excited about Bill Nye," who is set to be the day’s last big marquee speaker.

Unfortunately I can’t stay for Nye or for further conversation about the affront to Bethany’s refined sensibilities presented by hypothetical God-fearing Kentuckians celebrating the birth of their savior in public. I thank her for sharing her perspective and wish her good luck in the heat. And remember, I say. Watch out for Segways.

My Time Shooting With the Liberal Gun Club

‘Ocasio-Cortez in a Scarf’

Feature: What I Saw at a John James Campaign Rally