Gaetz on Omar: I'm Just Into Her Foreign Policy

Students Allied for Freedom and Equality protested a speech by Vice President Kamala Harris, who they say supports 'genocide'

An anti-Israel student group at the University of Michigan on Thursday marched through campus praising violent attacks in the Jewish state and calling for Israel's destruction.

Members of Students Allied for Freedom and Equality (SAFE) carried Palestinian flags through the quad while chanting, "Long live the intifada" and "From the river to the sea, Palestine will be free," a call for the destruction of Israel. The group was protesting Vice President Kamala Harris, who was visiting campus to discuss the Biden administration's climate policy.

The protest is the latest high-profile anti-Semitic incident on U.S. college campuses. Last week, Jewish students at George Washington University filed a discrimination complaint against their school, alleging it retaliated against them after they reported their professor for anti-Semitism. Instances of anti-Semitic hate have doubled on college campuses in recent years, according to a report from the AMCHA Initiative.

SAFE is an affiliate of Students for Justice in Palestine, a national group known for opposing Jewish speakers at universities and backing the anti-Semitic Boycott, Divestment, and Sanctions (BDS) movement. According to a 2019 report from the Institute for the Study of Global Antisemitism and Policy, Students for Justice in Palestine has expressed support for convicted terrorists and is the "main driver of Jew-hatred on campus."

The University of Michigan's public affairs office, SAFE, and Students for Justice in Palestine did not respond to requests for comment.

Wolverine for Israel, a pro-Israel campus group, slammed the demonstration as "a call to violence against Israelis and the Jewish state." 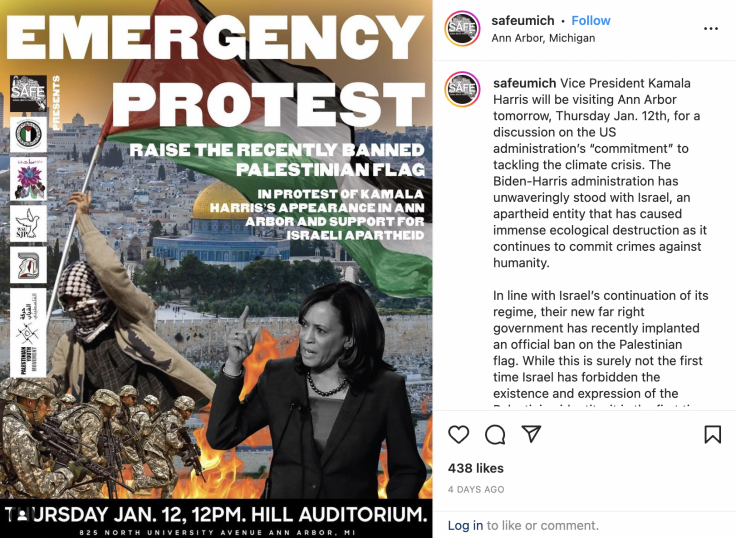 The group's condemnation of Harris is odd, considering the vice president's history of support for anti-Israel protests. In 2021, she praised a college student who accused Israel of "ethnic genocide."

"Your truth should not be suppressed," Harris said, nodding as the student criticized U.S. defense funding for Israeli missile systems.

A White House official told the Washington Free Beacon that "the Biden-Harris administration will fully and always respect the American people's First Amendment rights" but that the "United States firmly rejects the BDS movement" and "will be a strong partner in fighting efforts to delegitimize Israel."

"The United States supports policies that advance Israel's security and regional integration, support a two-state solution, and lead to equal measures of security, prosperity, and freedom for Israelis and Palestinians," the official said.

President Joe Biden in December approved $3.8 billion in defense spending for Israel. During their protest, SAFE organizers criticized Biden for providing "unconditional aid" that has "destabilized" the environment in the Middle East and contributed to the "ethnic cleansing of Palestinians in occupied territories."

"Not another nickel, not another dime, no more money for Israel's crimes," the group chanted outside the event.

SAFE also called out the vice president over her support for marijuana prosecutions that led to "mass incarceration"—only to laugh off her own abuse of the drug during the 2020 Democratic presidential primary. The Free Beacon first reported in 2019 that as California's attorney general, Harris imprisoned more than 1,500 citizens for marijuana-related offenses.

Salma Hamamy, who is listed on the university's webpage as the primary contact for SAFE, did not respond to a request for comment. She serves on student government for the College of Literature, Science, and the Arts and in May 2021 supported a campus-wide resolution to stand in solidarity with Palestinians.

The group issued an open letter the same month calling on the University of Michigan's Board of Regents to divest from all Israeli-owned companies.

Gaetz on Omar: I'm Just Into Her Foreign Policy