This year’s midterm elections produced a number of winners and losers. Among the losers we can count the likes of Hillary Clinton, Tom Steyer, Sandra Fluke, Wendy Davis, Ron Paul, Barack Obama (obviously), Harry Reid, and other enemies of freedom. Winners include: America, Mitch McConnell, moral progress, and, above all, the Koch brothers.

The Republican wave was a crucial step on the road to Kochtopia, which would be like heaven on earth for pot smokers, gay marriage advocates, bald eagles enthusiasts, art lovers, people who like hospitals and equality in education, and those who love America.

Democrats tried to run against the Koch brothers back in 2010, and we all know how that worked out. This year, they doubled down. Harry Reid and Tom Steyer led a months-long effort to portray the Koch brothers as un-American evildoers trying to "buy the election." However, despite outspending Koch-backed groups in many races around the country, Reid and Steyer have little to show for it apart from a silly website. Polling shows the Koch brothers are more popular than Reid.

One might think Democrats and their liberal allies would do the sensible thing and try something new. But they just can't help themselves. Politico reports that Democratic groups are planning to triple down on anti-Koch hysteria heading into 2016:

[David] Brock’s American Bridge outfit on Thursday began circulating a memo to senior Democratic congressional aides and big money groups making the case for redoubling the effort to make the Kochs into boogeymen.

Titled "Dear Koch Brothers: We Aren’t Going Anywhere," the memo, obtained by POLITICO from a source who received it, contends that the GOP takeover of the Senate makes it more important — and potentially more effective — to call attention to the Kochs’ influence in the GOP.

"This will be easier now that they are in power," Brock wrote. Citing polling showing that the Kochs — who were relatively little known at the beginning of the midterms — became more disliked as attacks from his group and its allies escalated, Brock said, "Our efforts will continue, because the alternative — staying quiet as these secretive billionaires pour hundreds of millions into politics to further their own bottom line — is impossible. … We’re going to dig deeper into their business in states that are key to 2016 — at the presidential, Senate and gubernatorial levels."

Not everyone, however, is on board. Some Democratic politicians and strategists are apparently annoyed at all the money wasted on Koch attacks:

"It’s utterly ineffective. Elections have to be about voters and what candidates will do for them," said Thomas Mills, a North Carolina-based Democratic strategist who has worked on Senate campaigns. "And this strategy is more about the candidates. It says, ‘Look at me! Help me — they are spending money against me.’ There’s no connection between that and voters."

.@stevenjldamico You don't know shit about me. I said publicly what a bunch of Democrats are thinking. 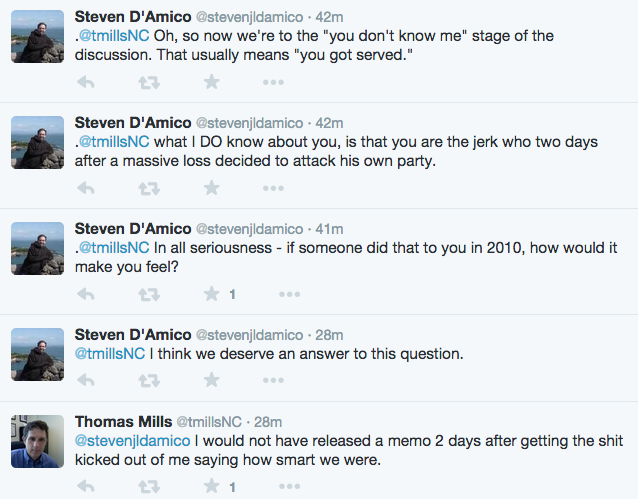 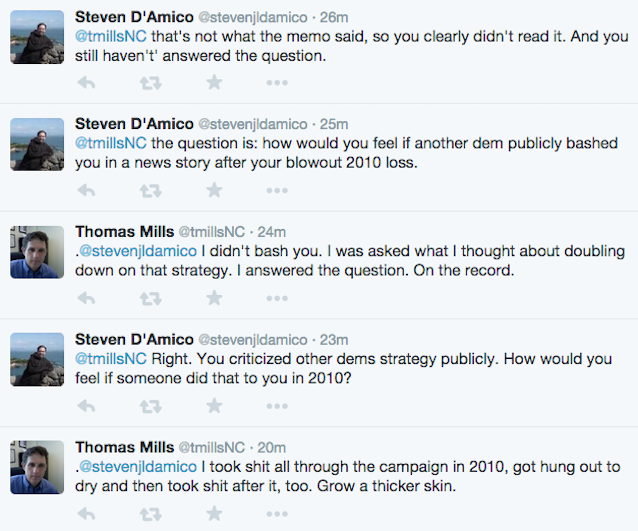