Eccentric millionaire Paul Krugman is annoyed with America. It seems that despite Krugman’s persistent whining that everyone should be outraged about income inequality and launching pitchfork raids against people who are slightly richer than Paul Krugman, most people aren’t that fussed.

In other words: Not enough people are listening to—and agreeing with—Paul Krugman. Also, people are stupid. "Today’s political balance," he writes, "rests on a foundation of ignorance, in which the public has no idea what our society is really like."

According to Krugman, the reason more people aren’t outraged is because the super-rich (who aren’t sports stars or celebrities) are "invisible" to the unwashed masses. For example, they don’t ride the subway, like Paul Krugman did one time on the way to film a CNN segment with Fareed Zakaria. Some of them have fashionable vacation homes in the Virgin Islands where they can go to hide.

Perhaps the American people are tired of listening to rich blowhards railing about the evils of the slightly more rich. Krugman happens to be one of the most obnoxious in this category; he actually gets paid six-figures to be publicly outraged about inequality. His disdain for the one percent has helped make him a bona fide one percenter.

Krugman’s nemesis and fellow millionaire/New York Times columnist David Brooks recently suggested that America’s elite should enroll in some form of adult education camp to promote "public spiritedness." That’s an idea that Krugman could presumably get behind, provided the camps are extended to the broader population of commoners, and include lectures on the dangers of income inequality by Paul Krugman. Agreement is mandatory. 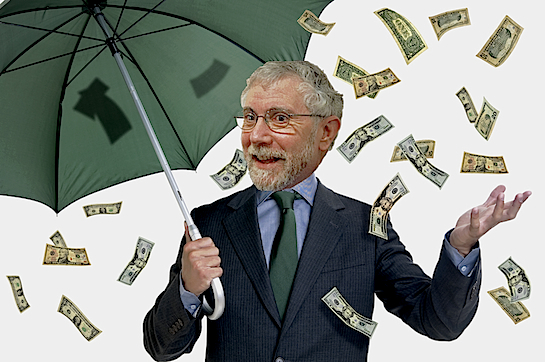 These True Facts About Democratic Voters Will Shock You

History Is Whatever The New York Times Wants It To Be