President Obama hasn’t always been in favor of voter suppression, but recent statements suggest his position has changed.

For example, White House press secretary Josh Earnest recently said that, despite the Democratic Party’s shellacking in the midterms, the president was "looking forward" to taking executive action to address illegal immigration. Never mind that many if not all Republican candidates ran in explicit opposition to these proposed actions. "I'm pretty sure I'll take some actions that some in Congress will not like," Obama said during a press conference last week.

In defense of his plan to ignore the election results, the president has suggested that his actions are justified because Americans who didn’t vote in the midterms support him. "Part of what I also think we’ve got to look at is that two-thirds of people who were eligible to vote just didn’t vote [in the midterms]," he said after the election. "I’m the guy who’s elected by everybody, not just from a particular state or a particular district."

Obama said he wanted to make sure that the voices of those who didn’t vote in the midterms are heard. The only problem is that this "silent majority" doesn’t support his agenda, either. According to a recent Gallup poll, only 36 percent of Americans thinks President Obama should have "more influence over the direction the nation takes in the next year," compared to 53 percent who said Republicans in Congress should set the agenda. Therefore, in addition to nullifying the recent election, Obama is also trying to suppress the non-votes of non-voting Americans. 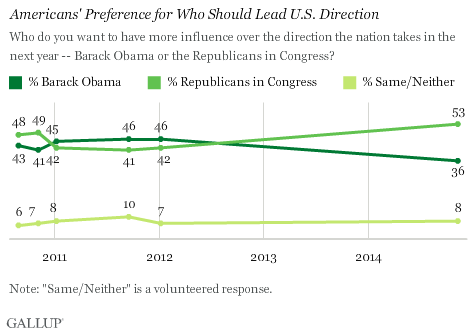 On immigration, Obama has essentially told Republicans that they must pass an immigration bill he likes, or else he will unilaterally enact immigration policies he likes. Even MSNBC’s Chris Matthews, a noted opponent of voter suppression, has lashed out at the president for his refusal to compromise.

Obama presumably agrees with third-year Duke student Jay Sullivan that midterms elections should be abolished, but that’s no excuse for his troubling flip-flop on the issue of voter suppression.