Elizabeth Warren is doing her best Ted Cruz impression this week as she attempts to scuttle a bipartisan budget agreement. She is trying to remove a provision—supported by both parties—that would roll back certain regulations imposed as part of the Dodd-Frank financial reform bill. President Obama, meanwhile, has urged Congress to pass the budget agreement as is.

Warren has taken particular aim at Citigroup, which she accuses of authoring the provision, and seems to be positioning herself to shutdown the government. "This is a democracy and the American people didn't elect us to stand up for Citigroup," Warren said on the Senate floor. "It is time for all of us to stand up and fight."

Citigroup is holding government funding hostage to ram through its government bailout provision. Join me in opposing the #CitigroupShutdown

Citigroup is an interesting target for a number of reasons. Obama’s former budget director, Peter Orzag, currently works there as a vice chairman of corporate and investment banking. Obama’s current Treasury Secretary, Jack Lew, is a former Citigroup executive.

Citigroup is also one of the largest donors to Hillary Clinton over the course of her political career. The financial firm was Clinton’s top donor during her time as Senator, contributing more than $780,000. During her 2008 presidential run, Citigroup PACs and employees contributed more than $400,000 to Clinton’s campaign. 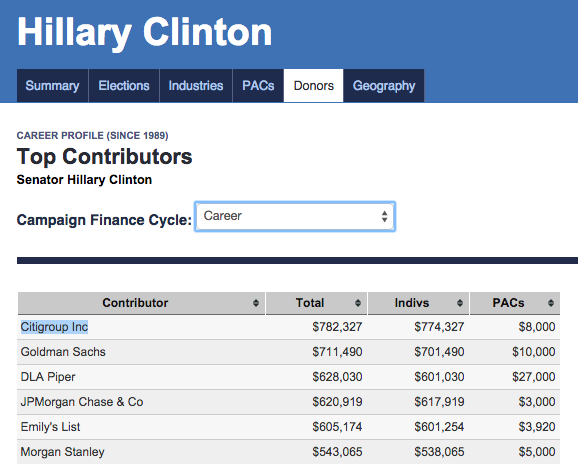 Are you ready? This should be fun.