The Biden administration is tapping for a top intelligence post a Palestinian-American who spent years at the forefront of efforts to boycott Israel and danced in front of a banner calling Israel an apartheid state.

The selection of Maher Bitar to be the senior director for intelligence programs at the National Security Council is already generating concerns that he will use the post to diminish intelligence sharing between the United States and Israel.

Bitar spent years leading anti-Israel organizations that promote the anti-Semitic Boycott, Divestment, and Sanctions (BDS) movement, which wages economic warfare on Israel. In college, he was a leader in Students for Justice in Palestine, a pro-BDS campus group known for bullying Jewish students. A 2006 yearbook picture from Georgetown University, where Bitar attended school, shows him posing before a sign that reads "Divest from Israel Apartheid."

Bitar, a former Obama White House staffer and general counsel for Democrats on the House Intelligence Committee, will in his new job play a key role in coordinating the various U.S. intelligence agencies and have a window into America's most sensitive intelligence and covert operations.

A leading Republican lawmaker and former Trump administration officials are criticizing Bitar's elevation to the council's top echelons, expressing concerns that his anti-Israel activism will influence his treatment of sensitive intelligence information. Bitar's past endorsement of BDS also runs counter to the Biden administration's promise to reject the movement. Linda Thomas-Greenfield, Biden's nominee to be the United Nations ambassador, said in her Wednesday confirmation hearing that BDS is "unacceptable" and "verges on anti-Semitism."

"U.S. and Israeli intelligence cooperation has repeatedly saved American lives and advanced U.S. national security. Maher Bitar is a long-time Boycott, Divest, and Sanction activist who has called for the abandonment of Israel," Rep. Michael McCaul (Texas), the lead Republican on the House Foreign Affairs Committee, told the Washington Free Beacon. "Appointing him for an integral role on the National Security Council is a slap in the face to our important ally Israel, and it sends a terrible message to the rest of the world. I strongly urge the Biden administration to quickly retreat from this dangerous decision and to appoint someone who is better aligned with our allies and less divisive."

In October 2009, Bitar gave a speech on internet activism to the pro-BDS Friends of Sabeel North America conference. He is also credited with assembling a 2008 magazine published by the BADIL Resource Center for Palestinian Residency and Refugee Rights, a group that backs BDS and supports the Palestinian "right of return," which would flood Israel with refugees from around the Middle East. In that publication, the authors discuss "Palestine's Ongoing Nakba," a term that refers to Israel's 1948 establishment as a "disaster."

In 2007, Bitar began an internship with the United Nations Relief and Works Agency (UNRWA), which is tasked with providing humanitarian services to Palestinian refugees. UNRWA has repeatedly come under fire by pro-Israel advocates and members of Congress for promoting anti-Israel materials and at times working with the Hamas terror group. The Trump administration cut U.S. aid to UNRWA in 2018, citing its anti-Israel bias, though it is likely the Biden administration will reverse that decision.

During his time at Georgetown University, Bitar sat on the executive board of the school's Students for Justice in Palestine (SJP) organization. SJP is one of the most active anti-Israel student groups operating on campuses across the United States. The organization has been banned on some campuses for disseminating anti-Semitic propaganda and harassing pro-Israel Jewish students. It is a prolific supporter of the BDS movement and has positioned itself as leading backer of Palestinian resistance and anti-Zionism.

While working with SJP, Bitar was one of the principal organizers of the 2006 Palestinian Solidarity Movement conference at Georgetown, which pro-Israel activists protested, calling it "anti-Israel propaganda" and accusing the Solidarity Movement of spreading anti-Semitism. Notes on the event published by the American Jewish Congress indicate that Bitar instructed supporters on how to promote divestment from Israel within church groups.

Pictures printed in Georgetown's 2006 yearbook show Bitar and other members of the D.C. Dabkeh dance troupe performing in front of a sign that reads "Divest from Israeli Apartheid." 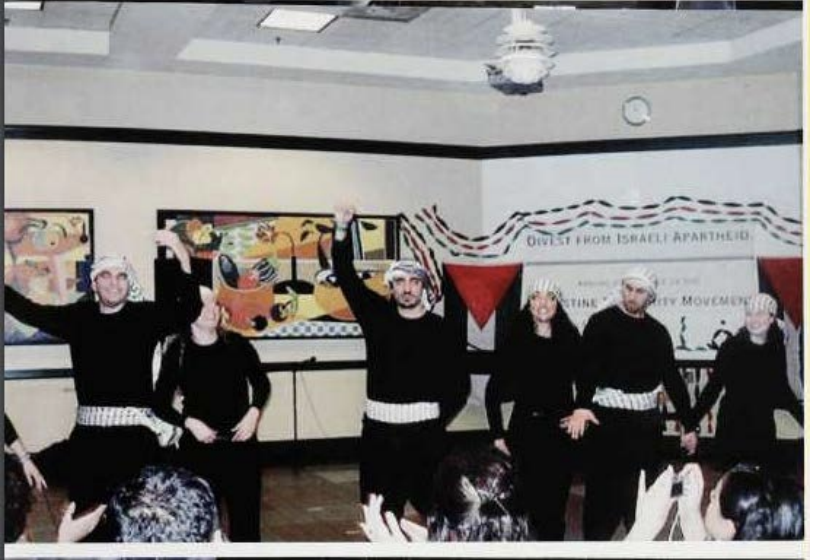 Bitar worked in 2005 as an intern for the Foundation for Middle East Peace (FMEP), an anti-Israel advocacy organization that is deeply enmeshed in the BDS movement. FMEP routinely accuses Israel of "war crimes" and describes it as an "apartheid" state. The organization has provided grant money to a host of prominent BDS supporters and anti-Israel groups, including IfNotNow, Jewish Voice for Peace, and Churches for Middle East Peace.

"Certainly all those who see the strategic value to the United States of our strong alliance with Israel want to ensure all lines of communication and coordination stay open and aren’t impeded by political considerations," Coates told the Free Beacon. "Especially after the enormous gains of the last year in terms of integrating Israel with our Arab allies in the region it would be counterproductive to return to the dysfunctional stalemate of the past."

One former Trump administration official, speaking only on background, told the Free Beacon that Biden "should immediately rescind" Bitar's appointment to the National Security Council, saying his work with anti-Israel organizations "should ring alarm bells across Capitol Hill and raises major questions regarding the Biden Administration's commitment to stand with Israel."

During his time in the Obama administration, Bitar served in the council as its director for Israeli and Palestinian affairs. He was also a deputy to Samantha Power, Obama's United Nations ambassador. Bitar most recently served as counsel to Rep. Adam Schiff (D., Calif.), lead Democrat on the House Intelligence Committee, and played a central role in the first impeachment of President Donald Trump.

Bitar's selection to Biden’s NSC was celebrated by pro-Palestinian activists and other Biden allies who could also find a place in the administration.

Robert Malley, who is being considered to serve as the administration's envoy to Iran, said he "can't think of a better choice than Maher." Malley's potential nomination also has come under fire from Republicans who say he will be overly deferential to the Islamic Republic.

Ziad Asali, founder of the American Task Force on Palestine, praised Bitar on Twitter as a "dedicated public servant who had the talent and the skills to rise up the ranks both at NSC and Congress."